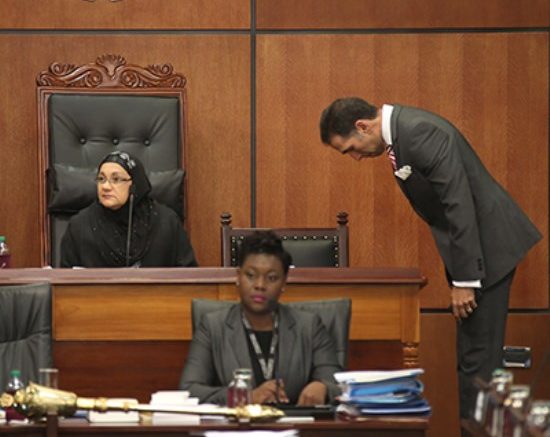 Mrs. Raziah Ahmed was appointed President of the Senate on February 3, 2015 and will act in President Anthony Carmona’s absence

She would again be appointed a Senator in 2013 during the 10th Republican Parliament, this time as a Minister of Government. My commitment is to inspire confidence in citizens and make a positive contribution to the development of T&T.” Ahmed was nominated unopposed by Leader of Government Business Ganga Singh and elected to replace Timothy Hamel-Smith whose appointment was revoked by the President, following the advice of the Prime Minister on Monday.

Dr. Wahid Ali  was the first Muslim to hold this post.  He served as a Senator and President of the Senate for 15 years, and (as at 2008) is the longest serving Presiding Officer in the Senate. Dr. Ali was the recipient of the Trinity Cross, the nation’s highest award at the time and was one of the founders of the Inter-Religious Organization (IRO). Dr. Ali passed away on August 9, 2008 at the age of 80.

Georgetown, Guyana: Students of both the Al-Ghazali and Meten-Meer-Zorg Academies operated by the Central Islamic Organisation of Guyana ( CIOG)  secured 100 per cent pass…