Georgetown, Guyana: Students of both the Al-Ghazali and Meten-Meer-Zorg Academies operated by the Central Islamic Organisation of Guyana ( CIOG)  secured 100 per cent pass rate at the recent National Grade Six Assessment examinations (NGSA).  The NGSA was written on 04 April and 05 April 2012 with the results being used to determine High School placement.

Six of the students were within the top 100 performers.  The top performers are Ijaz Muraslin, followed by Jameel Mohamed and  Shahid Hussien , all of whom secured places at Queen’s College; Saudiyah Ali will be attending Bishops’ High; Aasim Baksh St Stanislaus College and Aasiya Khan St Roses High School.

In a press release CIOG congratulated the students for their outstanding achievement.  Further the CIOG acknowledged and commended the outstanding educators at the Al-Ghazali Islamic Academy and Meten-Meer- Zorg Islamic Academy.  Special mention was given to Sir Johnny, Omadat Singh, Al- Hajj M O Ali and Hajin Akleema, who tirelessly prepared the students for the NGSA exams.  The CIOG concluded its press release by reiterating its commitment to ensure that all its students are provided with the opportunity to access a high quality of education in its academies regardless of race or religion.

Ramesh Ghir of Mae’s Primary and Michael Bhopaul of Graham’s Hall Primary have tied for the top place in the National Grade Six Assessment examination, Minister of Education Priya Manickchand announced in Parliament. Ghir and Bhopaul both scored 563 marks. Thirty-two children received the top ten scores.The other top performers are Roletta Barrow of Success Elementary with 546 marks third place, fourth position Angel Munilall of Success Elementary, Telesha Sukraj from Mae’s Under 12 with 543. Ashandai Liverpool of Tucville Primary and Roshawn Cummings of Success Elementary copped the sixth position with 542 marks; while the eight position was shared by Isaiah Carter, Ria Khan and Anthony Singh of Success elementary, and Surendra Gocool of Kawall Primary, with 541 marks each. Twelfth position was shared by Rihanna Khan of Success Elementary, Farah Chin of Marian Academy, and Alyssa Nurse of Mae’s Under 12 with 540 marks each. 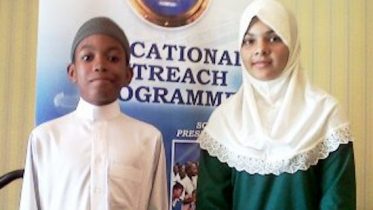