Until recently we didn’t pay much attention to Muslims living next door, in the Caribbean and Latin America–not even to one of the first ‘hejab’ incidents, which occurred in Trinidad in 1995. However some of the fastest growing Muslim communities (primarily through conversion and immigration) are located in this region. And, right away it’s the women (or some of them) that we recognize–from their elaborate African-inspired headdresses or their Indian-inspired shawls. In their religious practices, individual Muslim women in Trinidad, like women of other religious backgrounds, range from the more “secular” to the very devout, distinctions which are often signified by their head coverings. And, women tend to select styles of ‘hejab’ based on their perceived ancestral heritages.

Be the first to comment on "Muslim Women in Trinidad" 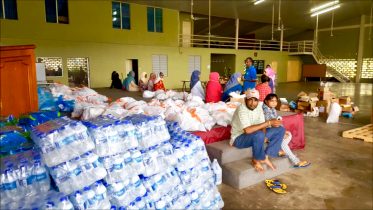 Barrackpore Muslims mobilized and assisted those who were affected by the flooding in southern Trinidad. Over 1700 meals, 1500 cases of water, and food hampers…