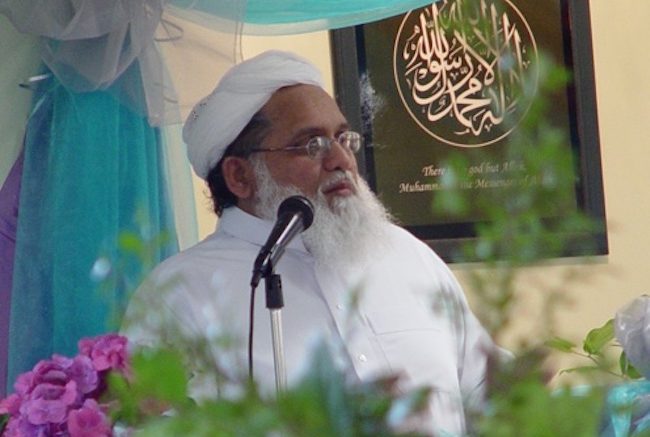 An audience made up of persons who trace their origins to Guyana and Trinidad recently gathered at Malton Islamic Centre, in Mississauga, Ontario, Canada,  to pay tribute to Maulana Siddiq Ahmed Nasir (pictured below).  The event was hosted by Mohamed Sadruddin Usman (Br. Sadro) and Sheikh Khaleel Ahmad.  Speeches reflecting and reminiscing upon the life of Maulana Siddiq were delivered by his contemporaries.    Amongst those present were fellow Guyanese Shaykh Faisal Abdur Razack, Imam of the Islamic Forum of Toronto, Shaykh Zahir Bacchus of Lote Tree Foundation of Brampton, Muneeb Nasir, President of the Olive Tree Foundation , Maulana Habeeb Ally of the North American Muslim Foundation,  Mr. Tallim Bacchus of Human Concern International and Haji Omar Farouk, President of IMO of Toronto. Maulana Siddiq also presented his audience with a timely reminder on the foundational need for fostering well balanced families in order to build great societies.  Brother Fazil Yusuf co-Chair of the CIOG Support group, on whose invitation Maulana Siddiq was present in Toronto, also highlighted the social and religious work of CIOG in Guyana.

Today is one of great joy and happiness.  This is indeed a wonderful and unique moment for all of us gathered in this House of Allah to be with our special guest.  In the late 1950s Guyana was blessed with a visit from Maulana Siddiqui of Pakistan.  This caused a great deal of buzz and excitement amongst the members of the Muslim Community.  They rolled out the red carpet and came en masse to see him and listen to his lectures.  He was like a visiting rock star.  Well many years later Guyana had their very own rock star with an almost identical name [according to Maulana Siddiq he was given his name by Maulana Siddiqui- editor’s note] who we are lucky to have in our midst today.

I have known Siddiq all my life but for the benefit of everyone let me say a few words of introduction.  Brother Siddiq was born in Guyana, the eldest son of Aunt Fazeela and Uncle Mansoor.  Incidentally today happens to be Uncle Mansoor’s 84th birthday.   Had he been alive he would have been immensely proud of his son and pleased to witness and be a  participant at this occasion.  Siddiq has four siblings, Idris, Mubeen, Aleema and Naaeem of Bakewell fame. He is married to Talia and the couple have a daughter Maaryah. Sister Aleema has asked me to pass on her salaam and regret that she cannot be here.  Siddiq’s grandfather Moulvi Nasir was the popular Imam at the Vreed En Hoop Mosque for many many years. On the academic side, Siddiq spent his early years at Bairds Private School then on a scholarship left to attend Queens College [in Georgetown, Guyana].  He concurrently attended Islamic classes at the Queenstown Madrasa under the tutelage of Ustad Bertie and I guess it was here along with his strong Muslim faith and family roots that he made the monumental decision to leave for Pakistan to pursue religious studies.   I must tell you that he was under some pressure to undertake other studies but Allah in His divine wisdom knew that Siddiq would be best suited as a great Ulema to spread His teachings and his (Siddiq’s] fate was therefore sealed.

The audience listening intently to the speeches

In Pakistan he attended the Aleemiyah Institute of Islamic Studies in Karachi.  In addition to completing the Al Ijaazah Al Aliyah curriculum.he also earned an M.A in Philosophy, an LLb (law degree) as well as  a Masters Degree in Education from the University of Karachi.since completing his studies he has spent his entire professional life in the propragation of Islam.

He has held numerous positions in Pakistan, Guyana, Trinidad, Barbados, New York and New Jersey.  In addition he has written  several papers on Islam and contemporary issues and presented these in various media channels, universities and forums across the globe.

He , his wife and their daughter make their home  in Trinidad where he is currently the President of the Ahlus Sunnah wal Jama’ah Institute and prior to that he was the Imam and Religious Director of the Muslim Centre of Middlesex County in Piscataway, New Jersey.  He speaks urdu and arabic fairly well.

Maulana Siddiq with Nazim Baksh, in background is Tallim Bacchus

There is another side to Siddiq.  He has a good sense of humour. I can still clearly recall on a holiday Monday Siddiq and and a bunch of cousins and friends chasing me through the streets of Georgetown because I had lost a bet to eat a gallon of icecream. I was eventually caught about an hour later hiding out  in a house on Regent Street. I had to come good on the bet which was to treat the entire gang at Brown Betty.  However, because of the large crowd and my immediate economic situation I had to negotiate for change of venue to which they all kindly agreed. We then made our way down to Boyo’s Cake Shop at the corner and  had a good laugh over our  dhal puri,  potato balls and soft drinks.

Siddiq was also an avid cricketer as well as a member of the Madrasa cricket team. I heard he also played a mean game of table tennis.  Now I know you haven’t come here to hear me speak so let me conclude.

Siddiq was a brilliant student but he never bragged about it. I know that first hand because I was in the same class with him at Bairds. He was always first in class term tests. He was even tempered, never heard him swear or in an argument  with anyone, calm non judgemental humble, respectful  and an all round nice person.  If one were to ask me to describe him in one word my immediate response would be “class” but I would add yet another word, a “supreme class”.  On a personal note, I am enormously proud of sharing a common blood, prouder still of your many accomplishments.  Everyday you strive to make your corner of the world a better place to live in.  May Allah grant you long life in good health so that you can continue to do this extraordinary work in the name of Allah.

Brothers and sisters , Siddiq is a golden gift from Allah to our family and his friends.  It is a great privilege and high honour to introduce him to you.  I know you join me in extending a warm Toronto welcome to our rock star, a scholar, a teacher, a leader, an organizer, an imam, our Brother Maulana Siddiq Ahmad Nasir.

First published in HAKIM here On the 18th of February 2012, Assembly of Intellectual Muslim (HAKIM) have sent six of their members to a lecture…