Totalitarian China has added to its dossier of gross human rights violations with its massive incarceration camps for Muslims. Initially denying but now acknowledging that Muslims are in huge concentration camps, China has proffered several reasons for this collective degradation. The primary purpose of this imprisonment of Muslims is to prevent acts of terrorism. Repugnant and disingenuous as this position is, it is in keeping with its ideology of totalitarianism that demands full conformity to the state. High-tech surveillance, coercion, suppression and distortion are central to ensuring their transformation into loyal and obedient adherents of the Communist Party. But how should a nation that touts itself as a great democracy be labelled when its practices are closer to China than to other democratic countries such as Canada? With the same label: Totalitarian. France is on a parallel course with China in its treatment of Muslims.

France has made sure that its forceful and harsh criticisms of Muslims are gradual ever mindful that its image could be tarnished. If that were not the case, it would make the argument of a well-defined strategy against Muslims most plausible. So, it has chosen to make incremental inroads into the space of Muslims as its modus operandi.

The alleged nonconformity of French Muslims to French values has been a constant refrain in French society. For as long as one could remember, France has claimed that its Muslims have behaved in ways not compatible with the values of secularism. By readily categorizing any unlawful act committed by a Muslim as an act sanctioned by faith, the French government of Emmanuel Macron has conditioned its people to accept the oppression of 9% of its population. Enough damage has been inflicted to make it acceptable to mainstream French society. Everything in France must revolve around French secular values as it were. No practice distinct from such values would be allowed.

So, is the right to define and articulate Muslims’ interests and preferences equivalent to forming a “counter society?” Which principles of the republic do Islamic cultural institutions seek to undermine? Do Muslims seek to subvert the essential principles of voting and free enterprise? Do the rituals of praying and fasting undermine economic progress? What about the right to speak out against bigotry and the derogatory portrayal of the Prophet of Islam? Are Muslims’ rights so truncated that speaking out against insults and distortions is considered a form of radicalism?

Muslims do have a distinct set of values in their outlook on life; that is why they are called Muslims. The women wear the hijab as a sign of modesty, not to scorn and defy other French women who believe and do the opposite. Muslims are taught to shun alcohol; not to eat pork; guard against improper mixing between men and women, unless certain imperatives such as work make that problematic. These are their religious preferences. Under your secular constitution, they cannot be deprived of this any more than the Christians and Jews in France can be prevented from exercising their choices. But despite the holes in Emmanuel Macrons’ argument, he has committed to making legislative changes to bring his shallow and tainted ideas to fruition.

One of the proposed legislation is to have stricter mechanisms for monitoring Muslims’ sports organizations to prevent the dissemination of Islamist teachings. Macron’s purpose is not as he says. If he is that concerned about extremist ideas and beliefs, he should instead concentrate on the activities of the far-right in France and Europe. But why would he? These are the very people that he is trying to appease. Their activities underpin his false sense of superiority.

Macron caught no one by surprise when he explicitly stated a few weeks ago that Islam is in crisis. Muslims in France and elsewhere would be naive if they did not expect this nonsense, especially from him. Islam has never been in crisis. But Muslims countries have been. Historically, the reasons for this are traced to France and other European nations. France conquered, plundered and destroyed so many countries, and what reparations has it paid for its unrighteous and predatory actions? Then again, France is not concerned about justice and human rights. It is no different than China. China uses the need to prevent terrorism as its pretext for imprisoning over three million Muslims. France uses “Islam in crisis” to abridge the rights of French Muslims.

Justice for All (Canada) put out the following explainer.

The murder of French teacher, Samuel Paty, committed by a misguided youth in response to the  showing of caricatures of the Prophet Muhammad in class about two weeks ago, and today’s church attack in Nice, have sparked a cycle of violence that is escalating. Since then, France has unleashed a brutal nation-wide crackdown targeting its Muslim citizens.

About 10% of population in France is Muslim. These are not recent refugees. Many came decades ago because France occupied and colonized their countries. French Muslims, despite being citizens for generations, have not been treated equally and are considered second class citizens.

French President Emmanuel Macron’s response has been divisive, discriminatory and Islamophobic. The French government has continued its defense of the Muhammad caricatures as freedom of expression, while maintaining that the problem is Islamist radicalization. Macron suggested that Islam was in need of an “Enlightenment” in France. Together with Interior Minister Gerald Darmanin, they went as far as to speak of a “civil war”. Their remarks represent intolerance and xenophobia towards the 5 million French Muslims who call France their home. Such actions from the French Government are reckless and irresponsible. 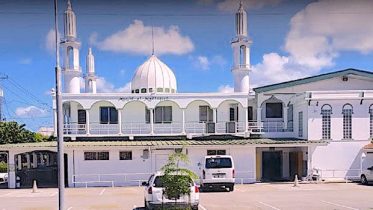