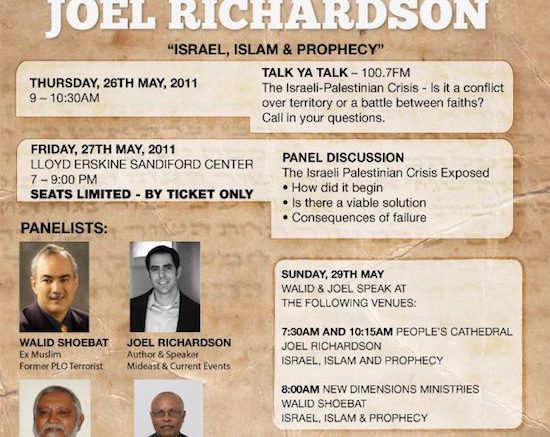 The Panel Discussion organized by Olive Tree group was held at the Lloyd Erskine Sandiford Centre on Friday 27th May 2011. What was advertised as a discussion on the Israeli-Palestinian Crisis turned into a hate mongering campaign against Muslims

The panelists were Joel Richardson and Walid Shoebat of the United States of America and Monsignor Vincent Blackett and Sabir Nakhuda of Barbados. There was a $10 asking price for tickets to cover expenses.

The discussion began with Joel Richardson seemingly laying the blame squarely on the shoulders of the Palestinians. His position was that Muslims hate Jews and it was their divine destiny to destroy them.  His solution was for Muslims to confess, repent and thereafter wait for a generation to pass before a peaceful solution can be sought.

Monsignor Blackett spoke of the need for all parties to work together and to build bridges of understanding.

Mr. Nakhuda gave a historical account of the beginning of the crisis laying out a case of broken promises, betrayal, oppression and injustice of the Palestinian people. He argued that a people who have been oppressed cannot be labeled as ‘terrorists’ when they respond to the aggression and injustice meted out to them. He spoke of the wall built by the Israelis as the apartheid wall and the several United Nations resolutions ignored by the Israeli government with no consequences.  As for solutions, he argued that sanctions like those imposed on apartheid South Africa would be a start by the international community in putting pressure on Israel to abide by UN resolutions.  He also called on other countries to be honest peace brokers and that countries like the USA who gives billions of dollars in aid, including military assets to Israel needed to step aside and allow others who are not bias to look for a peaceful solution.

Walid Shoebat for his part told of his history as a Palestinian terrorist and then giving up that to speak in favor of Israel.  He dismissed the notion of a land called Palestine and a people called Palestinians.  He argued that Islam and Muslims were intolerant and peace could not be negotiated with them.

‘‘The only people that seem to be educated enough to debate were Shoebat and Nakhuda,’’ claimed one audience member. ‘‘Joel Richardson was basically there to stir up hatemongering amongst Muslims…. The feeling of Islamophobia could be felt throughout the entire event’’

The discussion by the audience that followed in the aftermath of the discussion went the route of criticisms on Islam and Muslims. These comments and questions were followed by responses by Shoebat and Richardson that misrepresented Islamic teachings on several issues.  Verses of the Quran were read out of context and the Shariah attacked.

While solutions to the future of Israel and Palestine were to be discussed in detail, it was overshadowed by the Muslims v Christians/Jews debate.

No common ground was found by the panelists but what was clear was that the drive by the two speakers from America was to present a case for Barbados to unreservedly support of Israel.

Several members of the audience in a post discussion made a request for other speakers to be invited to Barbados to discuss the issue in a more objective manner and to discuss all issues from both sides.

Sadly, the event offered little education and debate on the situation in Israel and Palestine. There also was no real Israeli or Palestinian representation on the panel and the issue of religion overshadowed the debate. The audience got very little out of their $10.

Be the first to comment on "Importing Muslim hate into Barbados?" 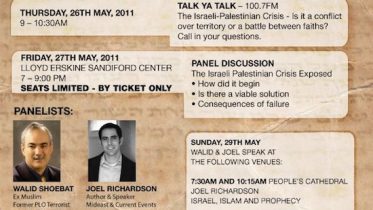 The Panel Discussion organized by Olive Tree group was held at the Lloyd Erskine Sandiford Centre on Friday 27th May 2011. What was advertised as…