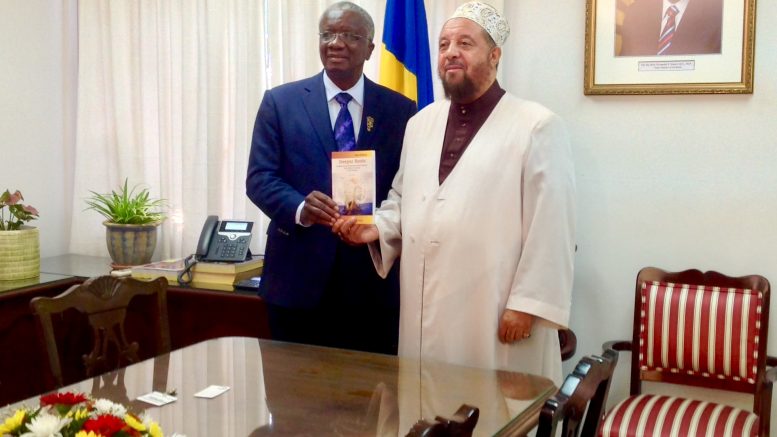 “For most of the literate world today, the first contact that the Caribbean had with the outside world was on October 12, 1492 when Christopher Columbus landed on the island of San Salvador. Historians then paint a picture of Christian European domination and cultural supremacy. In actuality, the history of the Americas and its people stretches back over twenty-thousand years. It tells a story of a rich continent with thriving civilizations and talented, organized human beings.”

The above excerpt is taken from the Introduction to the book ‘Deeper Roots’ by Dr. Abdullah Hakim Quick. It was against this backdrop that a 4 day visit (October 9 to 13) to the island of Barbados was recently undertaken by Dr. Quick.

October 12 this year marked the 525th anniversary of the arrival of Christopher Columbus to the ‘Americas’. And so this period was deliberately chosen to have Dr. Abdullah visit Barbados as part of his Caribbean tour over the last two years to re-launch his book ‘Deeper Roots’ and to further give insight into his research that proves the presence of Muslims and Africans in this region long before Columbus. Partnering with the Department of History and Philosophy at the Cave Hill Campus of the University of the West Indies, ROU Barbados and the Muslim community invited Dr. Abdullah to present his findings in their History Forum on the evening of October 12th. The event attracted over 100 persons of diverse backgrounds representing students, academics, Muslims, persons of other faiths and various ethnicity. It was also presented via Facebook live and had a global audience of over 5000 viewers.

Dr. Quick said he was not seeking to wipe away one nation’s contribution or part in the historical narrative. Rather he felt that he needed through his research to paint the full picture. Include all those nations and persons who played an integral part in the history and development of this region.

Unfortunately what has been taught over the years was a Europeanized version of events that shaped this region.  Left out were the centuries of civilization that existed pre-Columbus in the “Americas” and in Africa. This is a tragedy if our generations now and those in the future are not aware of the greatness of these civilizations and the positive impact they had at their time. Dr. Quick (2nd. from left) along with Suleiman (right foreground) at Codrington College.

Part of his tour of Barbados was a visit to Codrington College, the oldest Christian Seminary in this part of the world. It was a welcomed opportunity to interact with the Principal, staff and students of that institution. He reminded them of his journey to this point in life having grown up in the inner cities of the United States. His quest for understanding what was happening around him with people of his race and ethnicity. His questioning ultimately led him to the faith of Islam and ignited in him a passion for history so that he can research and present the whole story. That passion and research carried him to several parts of the world, including spending many years on the African sub-continent. He has written and produced documentaries on several topics related to African history, including Ethiopia.

In speaking to the students at the College he reminded them to always go deeper in their research and studies.  He pointed out that Africa has a lot that we can learn from and their glorious civilizations before the arrival of the Europeans. He highlighted the famous African ruler Mansa Musa, the richest man to have lived on the earth, much richer than the billionaires we have around today. His predecessor Abu Bakr left the Kingdom he ruled in present day Mali with 2000 ships and sailed west towards this part of the world long before Columbus.

Evidence of Africans in the Region Prior to Columbus

Historians have found evidence of the presence of Africans throughout South America, Central America, the Caribbean and North America predating Columbus arrival. But this aspect of our history is interesting left out, swept aside or put in a footnote. Several noted historians have attempted to reconstruct this evidence and Dr. Quick is urging history students to continue the process of reconstruction as it is story that must told with all the corroborating facts.

He noted that other acclaimed historians, with their own biases, don’t accept easily the claims of the presence of Africans in the region pre-Columbus. And so ensuring that historical evidence is produced is even more critical.

He highlighted the case of explorer Thor Heyerdahl, the Norwegian adventurer and ethnographer who became notable for his Kon-Tiki expedition in 1947, in which he sailed 8,000 km across the Pacific Ocean in a hand-built raft from South America to the Tuamotu Islands. The expedition was designed to demonstrate that ancient people could have made long sea voyages, creating contacts between separate cultures. Heyerdahl subsequently made other voyages designed to demonstrate the possibility of contact between widely separated ancient people, notably the Ra II expedition of 1970, when he sailed from the west coast of Africa to Barbados in a papyrus reed boat. This voyage proved that it was possible to sail from the coast of Africa into the Caribbean by using the currents and not having the need for huge, elaborate ships.

Dr. Quick has linked the understanding of one’s historical legacy with the present day quest to be a positive influence on society. He said we need to understand who our true heroes are and where their claim to hero status came from. Appreciating that we come from a tradition of greatness will help in building a better future for our people and society.

His Barbadian heritage also drove him to visit the island and actively research his family tree. This it seems will take a lot more visits. And he recognizes that the Barbadian influence helped significantly in his life journey.

Copies of his book “Deeper Roots” were presented to the Prime Minister, the Campus Library, the Codrington College Library and the National Archives of Barbados.

In the video (courtesy ROU Barbados) below Dr. Quick reflects on his trip to Barbados. 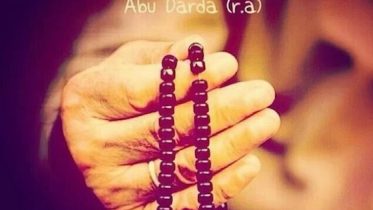 Surah Araaf, translated as The Heights, tells us a lot of how to get closer to Allah .  In the 205th ayat Allah  says; ‘and…