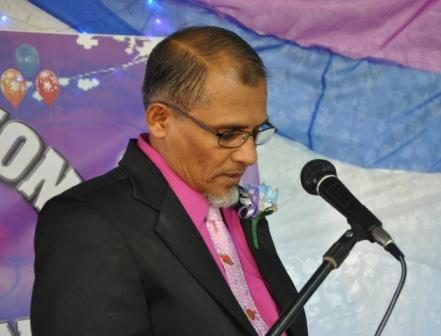 Posted By: The Teachers of Warrenville TIA Primary School September 22, 2012

Mr Khalim Ali retiring Principal of TIA Warrenville Primary School was celebrated at an event held on Thursday September 20th 2012. In his feature speech Teacher Rakeeb Rodney Kalloo recounted Mr Ali’s 40 years of contribution to education. Mr Kalloo said to his retiring Head Teacher “Principal, as you enter yet another phase in your journey, just know that you have truly made a difference at this school and in the lives of everyone you have interacted with. May Allah continue to shower you and your family with his mercy and blessings. In appreciation for your lifelong dedication to education, for believing in children, for guiding through example, for inspiring with passion, for living through loving, for leaving an indelible mark on the future, for touching the human soul, may the joy you have brought to so many, along with the gratification of a job well done, fill your life with happiness.”

May the peace and blessings of Almighty Allah be with you.   It is truly an honour for me to stand before you to speak about Mr. Khalim -a person of high integrity and spiritual values. Over the years, the one thing my colleagues and I have learnt about our dear principal, Mr. Khalim Ali, is the importance of a holistic education to our nation’s children.

Mr. Khalim’s educational voyage was launched at the Trinidad Muslim League Primary School, St Joseph, as a pupil and continued at Hillview College, Tunapuna.  This laid the foundation for an illustrious teaching career with its commencement at the El Socorro T.I.A. Primary School in June, 1973.  In 1976, Mr. Khalim pursued a Diploma of Education  at the Mausica Teacher’s College. After successfully graduating in 1978, he was appointed at the Five Rivers T.I.A. Primary School where he worked tirelessly for twenty-six long years.

In addition to effectively delivering the curriculum, he enthusiastically promoted both co-curricular and extra-curricular activities which included religious instruction, Jummah, drama and sports.  Little did this ambitious, young man know that while teaching at Five Rivers, he would meet Miss Rasheeda Mohammed, the woman who would capture his heart and later become his wife in 1983.  In 1985, Mr. Khalim resumed a course in Mass Communication at the University of the West Indies, which he had stopped after marriage, and also pursued a Major in Journalism.

However, Mr. Khalim’s educational pursuits did not end there. In the 1990’s his achievements included a certificate in Guidance & Counseling, a certificate in Television Production, a Certificate in Education and a Bachelor of Education Degree in Educational Administration.   In July 2004, Mr. Khalim Ali was appointed to the Warrenville T.I.A. Primary School as Principal 1. His primary duty as principal was always to ensure the safety of all. Under his tenure, the school experienced growth both in population and academic achievements.

This Principal together with his staff rallied through challenges including floods, smoke-filled days, robberies, and dust problems. As a true captain, Mr. Khalim always utilized his problem solving skills to overcome these formidable obstacles.  During the first year as principal, Mr. Khalim established the performance of the Jumma Salaah at this institution. This practice has benefitted scores of pupils, past and present.  Under his guidance, senior pupils such as Zakariyya Hosein and Nabeel Mohammed were trained to lead Salaah.  Even though the student population has doubled, the size of the building remains the same with the exception of the construction of a prayer hall. This hall is a comfortable place for the students to engage in various educational and spiritual activities.   Mr. Khalim also maintained an open line of communication with parents. With their help he was able to achieve many of the educational goals of the school.

The Principal implemented many programmes which catered for the holistic development of pupils. Some of these include a successful Lawn Tennis Programme and biennial Read–a-Thons. Mr. Khalim also encouraged pupils to participate in competitions such as Mental Math’s, Spelling Bee, Art & Craft, Creative Writing and others and he would ecstatically accompany them, on these ventures.   He also continued existing programmes. The numerous Walk-A-Thons and Sports Days were always truly fun-filled.  Principal was particularly elated, when in 2012 the female teachers won the tug of war against the female parents of the school.  A great leader always leads by example.  If I have to answer the question about the number of days the principal had been absent in eight years, my reaction would be “Was he ever absent?” He always expected a high level of performance in the classroom – a practice which has contributed to the continued success of Warrenville T.I.A. School and the enviable status of one of the most preferred primary schools in the district.

National Tests results have indicated that the school has reached an API rating of 418.  This means that we are performing way above the average level nationally.  At the S.E.A. (Secondary Exam Assessment) level, we are attaining places within the top two hundred.  To date the school has earned four places in the top two hundred.  Principal Khalim strongly believes in professional development.  He has regularly engaged the staff, in staff development exercises, mentoring and succession planning. Whenever issues transpired, he would always share his wealth of experience.  We the teachers at Warrenville T.I.A. Primary School have learnt many lessons from Mr. Khalim Ali, which have and will only serve to enhance our performance.

We can truly say that Mr. Khalim never had a real office, because that space has always been occupied by pupils who simply wanted to be in his company.  During the mornings, recess and lunch time periods they can be seen talking and laughing with him.  That space is also our photocopying room, meeting room and a place to “cool off” on hot days.  His, has always been an open door policy.  No matter how many times we go to the office for advice or assistance he would always stop whatever he was doing and lend us an ear.

We will miss the humorous dialogues between principal and Uncle Nazim.  On mornings, anyone in a bad mood who listened to them both would leave to go to their classroom in a better frame of mind.  His relationship with his ancillary staff has always been professional but friendly.

Principal Khalim surrounded by his loved ones

Principal, as you enter yet another phase in your journey, just know that you have truly made a difference at this school and in the lives of everyone you have interacted with.  May Allah continue to shower you and your family with his mercy and blessings.  In appreciation for your lifelong dedication to education, for believing in children, for guiding through example, for inspiring with passion, for living through loving, for leaving an indelible mark on the future, for touching the human soul, may the joy you have brought to so many, along with the gratification of a job well done, fill your life with happiness.  You Sir have truly made a difference!

Be the first to comment on "TIA Principal Khalim Ali retires" 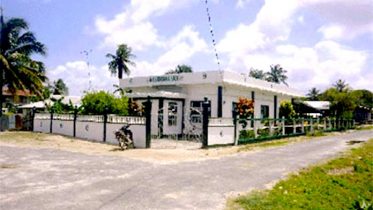 The Queenstown Masjid (on the Essequibo Coast) was built in 1780 by several Fulani tribes of African descent who came from Senegambia. The Fulani families on…