Mufti Shabil Ali passed away (innaa lillaahi wa innaa ilaihi raaji’oon / To Allah we belong and to Him is our return) on Monday 15th April, 1996, (25th Zhul Qadah 1416). He left behind his wife Rashida and two children Ashraf (13 years) and Arshad (11 years).

At the tender age of seventeen (17), having been actively been involved in the Tabligh Jamaat, Br. Shabil left for India in 1973 where he pursued Islamic studies. During a period of seven years he completed the Maulana and Qari courses at Darul Uloom Sabeelur Rashaad, Bangalore, India.  He then pursued a one year Mufti course (1980-1981) at Dabhel Madrasah, Surat, Gujrat, India.

During his stay abroad, he became proficient in Arabic and Urdu. In 1978, he married Rashida Adam Ali, daughter of the late Moulvi Adam Ali of Barataria,Trinidad.

His missionary zeal took him to various parts of India and Pakistan even while studying.

He returned to Trinidad in 1981 and founded Darul Uloom Trinidad & Tobago in 1984. Registered as a limited liability company under the Companies’ Ordinance, it was granted ‘Charitable  Status’ by the Board of Inland Revenue.  It is governed by an eight-man Administrative Council of which Mufti Shabil was the chairman until his demise.

The Head Office of Darul Uloom T&T and its Boys College are situated on a twelve acres spread at Rashaad Avenue, Mon Plasir Road, Cunupia. Three buildings accommodating the offices, library and classrooms, a dormitory, and a temporary kitchen and dining hall have already been constructed and commissioned.  A new building presently under construction,however will house the kitchen, cafeteria and dining hall. Construction of the masjid began in March 1996.

Mufti Shahil was the principal of the Boys’ College , since its inception at his residence at Rashaad Avenue, Don Miguel Road, San Juan. The Boys’ College now has an enrollment of one hundred and twelve (112) full-time students includimg foreign students and a staff of seventeen (17).

Having relocated the Darul Uloom Institute to Mon Plasir Road, Cunupia in 1986 he initiated the Darul Uloom GirIs’ College at his home in 1989 with himself as the principal. His wife, Rashida was appointed principal of the Girls’ College in 1994 after having successfully completed the two-year Alim programme. Now in its seventh year of operations the Girls’ College has an enrollment of seventy-five students and a staff of seven.

Both the Boys’ and the Girls’ Colleges provide a five year programme for seven O’Level subjects and an intermediate course in Islamic studies. Students are accepted after writing the Common Entrance Examination from the age of eleven years. Upon successful completion of the five-year programme, students  both  male and female, have the option to study for a further three years to graduation Higher Islamic Studies as well as to pursue studying Computer Studies and the following A’Level subjects: Arabic Language, English Literature and Economics. A Mufti Course is also offered.

His efforts to propagate Islam and to promote Darul Uloom T&T extended beyond the narrow boundaries of T&T.  He travelled to nearby countries such as Barbados, Guyana, Suriname and Venezuela and to others such as Panama, the USA, Canada, the United Kingdom and South Africa

Since his return to Trinidad, Mufti Shabil was actively involved in educational pursuits.  His publications include seven books on the topics related to the teaching of Arabic, Tajweed and Islamic Studies for children.  His unpublished works span a wide range of Islamic Sciences such as Tafseer, Hadith,  Islamic History, Islamic Beliefs,  Islamic Inheritance and Islamic Jurisprudence.

Certainly, Mufti Shabil’s scope of activities went beyond the walls of Darul Uloom. He developed a close affinity to the Muslim Credit Union which was established in 1983 and continued to be its Shariah advisor.

His role in the forging of Muslim groups and the founding of the United Islamic Organisations of T&T (UIOTT) was no insignificant one. As representative of the Darul Uloom to the UIOTT, he served as Chairman of the group for two consecutive years. He was a member of the Unity Dialogue Committee comprising of representatives of UIOTT and the Muslim Co-ordinating Council – an umbrella body made up of the Anjuman Sumatul Jamaat Association (ASJA), Tackveeyatul Islamic Association (TIA) and Trinidad Muslim League (TML).

Mufti Sbabil was a teacher, a counsellor and a friend to all who sought his guidance. He will certainly be missed by many for a long time.

“He has made a significant contribution to the propagation of Islam in the Caribbean, and while the Institution he founded is far from completion, it began bearing fruits during his lifetime.” Dr. Waffie Mohammed, Director, Muslim World League Regional Office.

“The works and achievements of our beloved Brother, Mufti Shabil Ali, in such a short span of time, proves beyond any the type of person he was. He lived an exemplary life of a true Muslim who inspired many. I am happy for him that he died in a state that is pleasing to Allah, but I am sad that he had to leave us and his family in such a hurry.”  Mohamed Munaf Mohamed, Missionary, Darul Ifta, Saudi Arabia

“During his tenure as Chairman of the United Islamic Organisations of Trinidad and Tobago (UIO’IT) he nurtured the growth and development of the then young and fledgling body. He continued to function as adviser and consultant to this group after abstaining from holding office owing to health reasons. He also played a key role in the Unity Dialogue Committee comprising of representatives of the Muslim Coordinating Council (MCC) and the UIOTT: One of his main concerns was the unity of the Muslims in T&T.”  Faiz Amin, President, UIOTT

“It is in the field of the continuing dialogue amongst the Muslim Leadership to effect functional unity that I was exposed to Mufti Shabil Ali over the past five years. His penchant for details and listening to different views and thinking, before arriving at a consensus epitomizes the Islamic concept of Shura. As he matured, he became more expansive in thought, word and deed and this was reflected in his oft-repeated phrase, “Consultation, Co-operation and Co-ordination”.  Dr. Mansur Ibrahim, President, ASJA

“Mufti Shabil Ali has left an indelible mark on the history of Muslims in Trinidad and Tobago. The rapid response of an extremely large number of persons from all quarters of the Muslim community to his funeral (in just over five hours after his passing) bears testimony to the love and respect which be commanded. He will be remembered especially for his initiative in establishing the Dar-ul Uloom institute and for his efforts in pursuit of Muslim unity in Trinidad and Tobago.”  Dr. Nasser Mustapha, President, Trinidad Muslim League

“Mufti Shabil played a significant role  in the development and growth of the Muslim Credit Union Co-operative Society Ltd. (MCU). He served with distinction as a Shari’ah Advisor.”  Hakeem Ahmad, President, MCU

“From a very humble beginning, through his indefatigable pioneering efforts, he established the Darul Uloom, which has now become an institute of Higher Islamic Learning. Hundreds of Muslim families have benefitted from this Thawabi Jariya (Continuous blessing).”  Dr. Ebrahim Kazim, Director, Islamic Academy

“Working under him for the past seven years, has made me understand him and his sense of reasoning, which to some people, seemed absurd and irrational to say the least, but in reality, it was always based on sound reasoning supported by proper proofs and research – especially concerning the Shari’ah. In retrospect too, it seems to me, that he never was an idle man. He always tried his best to stay within the limits of Islam. He has touched, and affected positively, the lives of thousands of people – as his janazah has proven.” Shaykh Fazeel Mohammed, teacher at Darul Uloom Boys’ College

“The passing away of our dear brother, Mufti Shabil Ali, is indeed a great loss to the Muslim community. He has indeed blazed a path for others to follow. In the field of Islamic education, I do not know of anyone else who has done so much in so little time. May Allah Subhanahu wa Ta’ala reward him many times over for the sacrifices he has made for the educational upliftment of the Muslim community.”  Zahid Mohammed, Ag. Executive Director, Caribbean Islamic Secretariat

“The passing of Mufti Shabil Ali, affectionately known to many Trinidadians as “Mufti”, has left a deep sense of sadness and avoid to many who knew him personally as well as those who are aware of his efforts in the establishment of the Deen of Al-Islam in this part of the world. He performed selfless service to the cause of Islam and Muslims not only in Trinidad but the region and the world at large. His short life was an example of making full use of one’s talents and resources in the Path of Allah.” Suleiman Bulbulia, Imam of the Islamic Centre, Hastings, Christchurch, Barbados

Article updated to include the featured video. 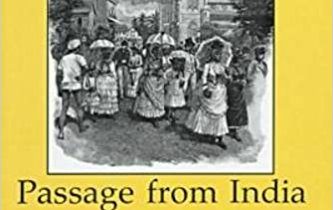 Passage from India to El Dorado: Guyana and the Great Migration ← Click for original source. This book is the story of the indentured workers,…