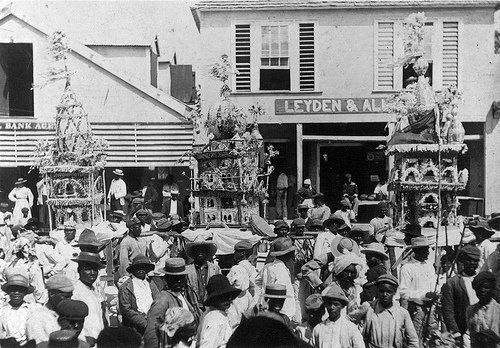 1989: The scene on Spanish Town Road as dozens of Indian-Jamaicans celebrate the ritual of Hosay. The very expensive tabernacle, lifted at centre, is blessed in a religious ceremony, carried through the streets and then dumped into the sea. picture by Jamaica Gleaner

The Hussay Festival is a traditional festival pronounced and sometimes spelt as in this image’s title but actually called Hosay. Hosay was brought to the Caribbean by Indian indentured workers in the 1840s. It is the Caribbean version of Moharram, an annual festival observed by the Shi’a Muslims within the Islamic faith. Moharram is the Islamic month when followers mourn the memory of the Prophet Mohammed’s grandsons, Hosain and Hasan. Acts of piety include self-flagellation and prayer. The bamboo and paper replicas of the tomb of Hosain being carried through the procession of our chosen image form the focus of the ceremony. They are called Tazias or Tadjahs and are built over the nine days of mourning songs that take place in Hosay. On the tenth day of Hosay the Tazia is carried through the streets and thrown in the river or sea (or buried in a hole in the ground). Olive Senior also notes that in the Caribbean, Hosay has lost most of its religious significance as, in countries such as Jamaica, “Hosay features the active participation of many different religious and ethnic groups other than Muslims, especially non-Indian Creoles”. This can be seen in the image here, where the people captured are more likely to be “celebrating communal solidarity, proclaiming their ethnic identity in public, and affirming / remembering their ancestors’ sacrifices in coming to labour on the sugar estates.”

Senior’s Westmoreland witness to Hosay processions in the early twentieth century remembers that “Hosay represented mystery, beauty and violence. Non Indians, fascinated by the highly crafted Tazia, were often driven away forcefully by those in the procession. Looking or touching was forbidden, and dangerous. Fighting broke out…[chiefly] from each believer’s desire to be the first to launch his own shrine into the sea, an act which brings great blessing and good fortune…” She adds, more prosaically, that “the police were always on the alert during Hosay, and the Savanna-la-mar Hospital usually admitted a number of the wounded”

Be the first to comment on "Hosay Festival, Westmoreland, Jamaica" 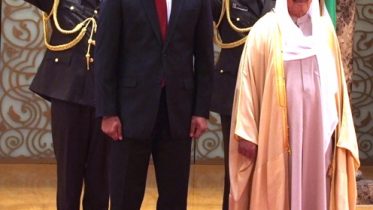