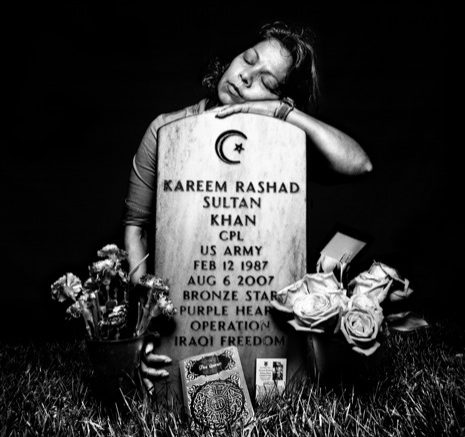 Colin Powell spoke in his Meet The Press interview of being moved by a photo essay he saw in a magazine:

It was a photo essay about troops who are serving in Iraq and Afghanistan. And one picture at the tail end of this photo essay was of a mother in Arlington Cemetery, and she had her head on the headstone of her son’s grave. And as the picture focused in, you could see the writing on the headstone. And it gave his awards–Purple Heart, Bronze Star–showed that he died in Iraq, gave his date of birth, date of death. He was 20 years old. And then, at the very top of the headstone, it didn’t have a Christian cross, it didn’t have the Star of David, it had crescent and a star of the

Islamic faith. And his name was Kareem Rashad Sultan Khan, and he was an American. He was born in New Jersey. He was 14 years old at the time of 9/11, and he waited until he can go serve his country, and he gave his life. Now, we have got to stop polarizing ourself in this way.

Cpl Kareem’s has extended roots in Trinidad where his parents migrated from to USA. 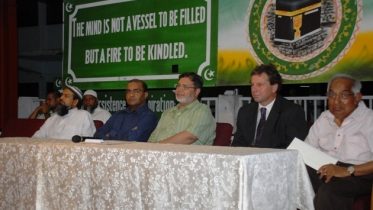 Georgetown, GINA, May 21, 2010:  President Bharrat Jagdeo believes that there should be a global battle for a greater understanding of faith as it is…