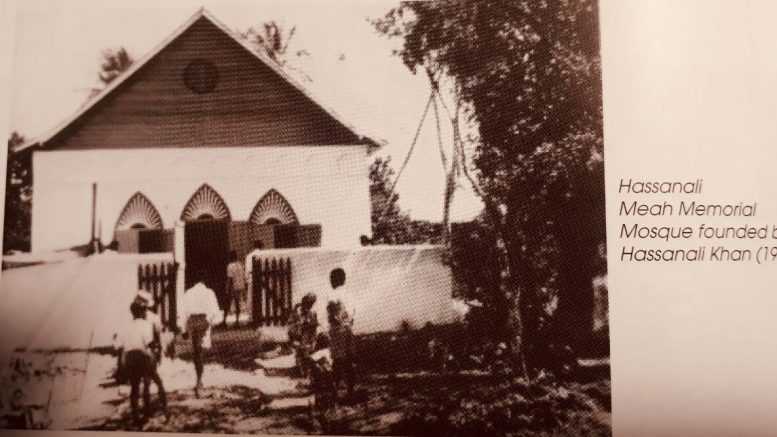 The Hassanali Meah Memorial Masjid is situated on Macoon Street, Victoria Village, San Fernando, Trinidad and Tobago. It was constructed circa 1888. This area of land on which the building is presently situated has been the site of a Masjid for at least one hundred years (circa 1888).  The original Mosque was erected by the late Hassanali Meah of Victoria Village (formerly of India) may have been the first of its kind to be built in this country.  It served the entire south of our island for a considerable period of time. Hassanali Meah is the direct ancestor to former President of Trinidad and Tobago, Justice Noor Hassanali. 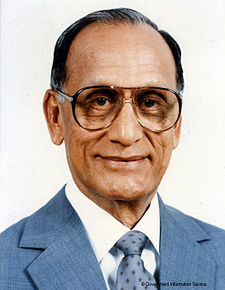 The Mosque, as originally erected, was 37 feet long by 27 feet wide.  There was a dome simulation on the eastern wall.  The floor of the Mosque proper, and the gallery, was of solid concrete, the walls were of oven bricks and limestone with large wooden columns at ten-foot intervals.  The building contained one window space on the south and on the north and three door spaces on the western side.  These spaces were not filled with windows or doors as such and there were no toilet facilities whatever.  The grounds covered an area of approximately 110 feet by 70 feet and the property was not fenced

In the year 1946, some repairs were done with windows and doors installed in the open spaces.  A wooden floor was then laid, and two small gates were put in appropriate spaces in the gallery.

Over the years which followed, cracks appeared in the Mosque walls, and in December 1958, a decision was taken to demolish the original building and replace it.  Plans were also made to surface the yard and to fence the premises.  Demolition began on January 4, 1960, and the new building was completed on about March 15, of the same year at a cost of some $10,000.00.  The builder was Mr. Mark Waldon of Cocoyea Village.  The marlay tile floor was laid by Alstons Ltd., and the entire yard was surfaced with gravel at no charge by Loorkhoor Sooknanan of Victoria Village and the fence and bridge were erected by Conrad Thomas of Lower Hillside in San Fernando.

When in 1958 the decision was taken to demolish the original Mosque, the main concern of the families was to replace it with a structure as close as possible to the original.  This was in fairness to and out of respect for the revered memory of Hassanali Meah who initiated the project which served so well for at least seventy (70) years.  Concern was also for maintaining the influence of oriental culture and cherishing and preserving that which is of historical value.  The rebuilt Mosque at that time did not claim to be a work of art but stood firmly on solid ground while promising to continue to serve, even though perhaps, not as long as the original.

The new building of 1960 was approximately 30 feet long and 27 feet wide, excluding the dome on the Eastern side and gallery.  The Mosque building proper including the dome stood exactly on the same spot as did the original.  The foundation base walls remained unchanged as did the gallery gates and toilets were additions as well as the concrete bridge leading from the street into the yard.  The fence consisted of oven bricks removed from the walls of the original building.  Three pieces of timber taken from the old Mosque were also used in the shoe stand, a further show of the lasting quality of the old days.

The building served well for the next 20 years, seeing an ever-increasing size of the congregation in recent years, however, despite periodic repairs, there was a general deterioration of the structural integrity of the building and in the year 1982, it was decided to again completely demolish and rebuild the Mosque.  This time, however, an enlarged and steel-framed structure was to be put in place.  Demolition and reconstruction commenced in January 1987 with an initial estimate of $120,000.00 for completion.  A foundation stone was laid by Maulana Imran Hosein on January 22, 1987.  Sufficient progress was made in the ensuing months to allow Eid prayers to be held in the new but unfinished building later that year.  Since then the building committee received much support from the congregation and their friends.  An enlarged kitchen, kindergarten, reception area and improved convenience facilities were added since the initial plans were prepared.  There has also been much upgrading of the finish of the internals of the structure resulting in the beautiful building which now stands on the plot of land which has accommodated a Masjid for the past 100 years at least.

The builder/designer was Mr. Habib Edoo of Scrimjeour Street, San Fernando.  The enlarged building was completed in February 1988 at a cost of some $285,000.00.  The structure now occupies essentially the full plot of land with the prayer area almost double its original size.

The congregation remains of modest means and the decision to provide the additional amenities was in direct response to assisting the community to continue enriching their way of life in the service of Allah Almighty and their fellow citizens.

REPORT OF THE BUILDING COMMITTEE

It is indeed an honoured privilege for me on this very sacred and auspicious occasion to present a brief report on the highlights of the activities of the Building Committee, a committee charged with the responsibility of demolishing the existing Masjid and re-constructing a new Masjid to cater for the needs and aspirations of the increasing membership as well as the future generations.

Historically, the facts of this commendable effort should not be buried with the oblivious past, but rather, be indelibly inscribed in the annals of history for preservation and for the edification of posterity.

Consequently, therefore, it is necessary to document the motivating factors which initiated the demolition and re-reconstruction processes. 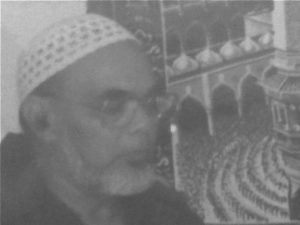 It was at Fajr time one rainy Sunday morning in 1976 when the then Imam of the Macoon Street Masjid, the late Haji Khairul Baksh of revered memory (may Allah bless him) found the carpet on the concrete floor of the Masjid drenched with stormwater. This regrettable occurrence which influenced an immediate structural inspection of the building revealed that the materials used in the construction of the Masjid were so deteriorated and porous that any major repairs and/or renovations undertaken will not redound to the best interest of the building and the Jamaat, and consequently demolition and re-construction would be inevitable and advantageous

A meeting of the Jamaat was held and the following measures agreed upon:

A new roof was immediately installed, and fund-raising procedures initiated under the Imamshhip of the late Haji Khairul Baksh (May Allah be pleased with him).  His conscientiousness and invaluable services to the Jamaat and the Muslim Community cannot be overemphasized. 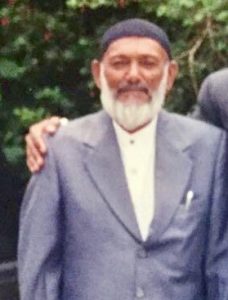 Upon his retirement, a period of inactivity evolved but this was curtailed by the acceptance of the Imamship of Brother Tyab Hosein, the present (Ed.: at date of writing Imam in 1988) Imam of this newly constructed Hassanli Meah Memorial Masjid.  It is worthy to mention that this hard-working and energetic Imam immediately appraised the situation and re-commenced the proceedings.

The matter was discussed at length with Justice Noor Hassanali, now President of the Republic of Trinidad and Tobago, who represented the Board of Trustees at a meeting specially convened for the purpose, and who not only conveyed the Trustees’ permission but also indicated their interest and financial support.

I volunteered to design the new Masjid and to supervise its reconstruction free of cost with general assistance from members of the Jamaat as and when required, and in an effort to reduce labour cost members vowed to give free labour on Saturdays, Sundays and public holidays.

Demolition of the existing Masjid was undertaken on 17th and 18th January, 1987 by members of the Jamaat and the foundation stone of the new Masjid was laid on 22nd January, 1987 by Maulana Imran Hosein in an impressive ceremony amidst a distinguished gathering which included the President General of ASJA and several Imams.

During the period of re-construction several weekly meetings were held, and problems nipped in the bud.

The total cost of the new Masjid lies within the vicinity of $285,000.00 which came mainly through personal cash contributions, material donations and fund-raising ventures.  It took just over one year to be completed, Alhamdu Lillah (All praise is for God).

I wish to highly commend members of the Building Committee for willingly accepting this important Islamic responsibility for the sake of Allah Almighty, and for faithfully and conscientiously discharging that responsibility with honour and decorum.  May Allah Almighty reward them here and in the Hereafter.

The Building Committee wishes to convey sincere appreciation and gratitude to all members of the Jamaat, particularly Brothers Ivan Mohammed, Budrali Baksh, Imam Tyab Hosein and Haji Gabriel, who have sacrificed many weekends and public holidays in order to give voluntary labour in exchange for mundane things.  We do also wish to express sincere appreciation and gratitude to all our Brothers and Sisters, individually and collectively, Jamaats and business firms for whatever assistance, financial or otherwise, which they have given in order that we were able to successfully complete this laudable project.  We feel confident that your reward is with Allah Almighty. 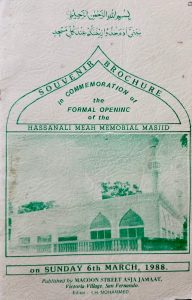 Cover of the brochure from which this article was extracted.

On my own behalf, permit me to inform you that I had committed myself wholly and dutifully to this project, and have done my utmost.  If I have erred in any way, it should be taken in good faith for my intention was always founded on good motives.  I wish to state that it was my fervent ambition to re-construct the Macoon Street Masjid so as to make it the showpiece of the South, if not the country.  Alhamdu Lillah (All praise is for God), I have achieved my ambition and perfected my goal.

My dear Brothers and Sisters, let us endeavor to maintain this new Masjid as commanded by Allah Almighty in the Holy Quran, Ch. 9, v 18: (Ed:- “The mosques of Allah shall be visited and maintained by such as believe in Allah and the Last Day, establish regular prayers, and practice regular charity, and fear none (at all) except Allah. It is they who are expected to be on true guidance.” Yusuf Ali Translation), and to make full use of it not only for Jumma Namaaz (Friday congregational prayers)  and special occasions but to submit ourselves completely in Ibadat (worship) to Allah Almighty daily in order to earn His Love and sanctity His House.

Allah says in Surah Hashr; ‘O ye who believe! fear Allah, and let every soul look to what (provision) he has sent forth for the…