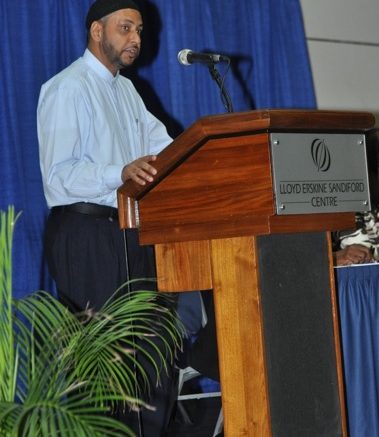 April 14th 2012, Bridgetown, Barbados: A delegation of seven Muslims joined leaders and representatives of the various religious groups and other social agencies of Barbados at a one-day Religious Summit last Friday.  The Religious Summit, the first of its kind in Barbados, was organized by the Ministry of Family, Culture, Sports and Youth under the theme: “THE ROLE AND RESPONSIBILITY OF RELIGION IN BARBADOS; AN EXAMINATION OF THE ISSUES CONFRONTING US AS A NATION”

In his opening address to the Summit, which was held at the Lloyd Erskine Sandiford Centre, Minister of Family, Culture, Sports and Youth, Stephen Lashley, who also holds the portfolio Ecclesiastical Affairs, stated: “We are not here to debate doctrinal matters or to engage in discourse as to the correctness of one’s belief over the other. There are too many issues facing our nation for us to become engrossed in tribalism. The choice of religious belief is a personal matter. I believe that what unites us in religion is far more important than what divides us in speaking up for a just and decent society.”  The Minister also commended religious groups for their contribution to Barbados, he said “It is a well-known fact that religious groups in Barbados have played a significant role in adding to the social character of our society…I am well aware that all your faith-based groups continue to provide significantly to the nation building and I thank you for this ongoing contribution”.

The Summit explored several issues and six main topics were presented in the pre-lunch session. These topics included Family Life and Religion, The Role of Faith in the Development of Society, Religion and Superstition, Human Sexuality, Crime and its Impact on Society and Solutions to Challenges Facing Marginalized People.

Secretary of the Barbados Muslim Association, Suleiman Bulbulia, spoke on The Role of Faith in the Development of Society.  He pointed out “that one of greatest challenges faced by representatives and practitioners of faiths, is the growing tendency by many of the educated and so-called experts in our modern world to dismiss the role of faith and faith-based solutions to the myriad of problems confronting our society.”

“The view is being espoused that religion is outdated, its concepts archaic and not relevant to today’s modern and advanced society. Even the concept of a Supreme Being, a Creator, God Almighty, is challenged and persons who express their belief in such are considered backward.”

He suggested “that we work towards drawing upon all the faiths in our society to help in the task of building up our society.  Each of our faiths has something to bring to the table.  In our own private domains, be it the church, synagogue, mosque, or temple there are success stories of communities bonding together and achieving for the benefit of all. What we must do now is come out of our comfortable settings and go forth into the wider society and seek to apply those principles and practices that we have all tried and proven successful for ourselves”.

In the post lunch session workshops delving further into each of the six topics were undertaken. All participants divided themselves into the respective groups for discussions. At the end a final session was held to discuss the findings of each group and their recommendations on the way forward.

In the wrap up Government promised to look closely at all recommendations made and to take to the Cabinet the setting up of a Religious Advisory Board. 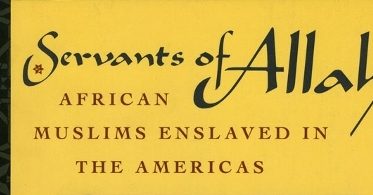 A reading from Sylvaine Diouf’s well received book, “Servants of Allah”: African Muslims Enslaved in the Americas. Pg. 150-153. The Muslim Factor in the Haitian…