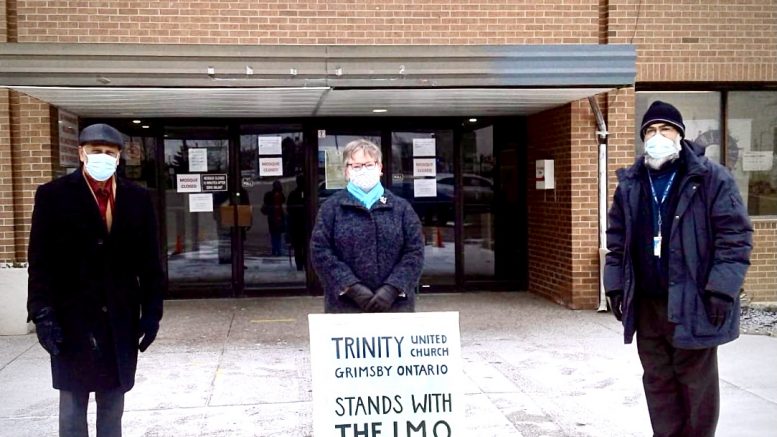 December 16, 2020: Mohammed Aslim Zafis (r.a.) was killed in cold-blood on Wednesday, September 16, 2020, in the parking lot of the International Muslims Organization (IMO) mosque. This murder shocked his fellow citizens generally and those of the faith communities in particular. Trinity United Church in Grimsby, Ontario was moved to send a handwritten note of solidarity and condolence to IMO. The Trinity Church is 81 km by car from IMO, yet the suffering of their IMO “siblings” compelled them to reach out to share the burden of the loss of Aslim (r.a.). Geographic distance nor lack of fellowship derived from a shared faith tradition prevented the Grimsby congregation from expressing the common humanity that binds us all.  This is as it should be, friends amongst strangers. God’s guidance in the Quran states “O mankind, indeed We have created you from male and female and made you peoples and tribes that you may know one another.” [Q49:13]  God further guides “you will find the nearest in love to the believers (Muslims) those who say: “We are Christians.” That is because amongst them are priests and monks, and they are not arrogant.” [Q 5:82]. 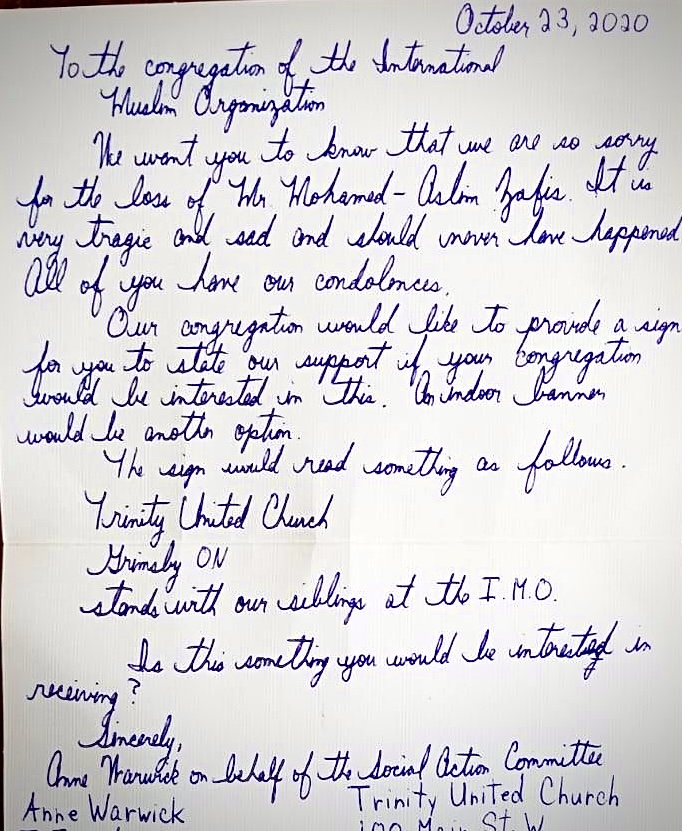 Today Sister Anne Warwick of Trinity United Church presented the solidarity sign to IMO.  In her remarks, she stated:

“Many people in our church community heard about the news of the murder of Mr Zafis at the International Muslim Organization (IMO) in Etobicoke. It was a shocking and tragic incident that took the life of an innocent person. It would have set a family as well as an entire mosque community on the path of grief and loss.
How would we feel if this happened to one of the people from our congregation on our church property? We are only able to imagine what this would be like, but we know it would be terrible. We needed to let the IMO know that we care about them. Let them know they are not alone. A small note of condolence was sent. In the note, we stated that we would be happy to get a sign to them that could be put on the property to show the community that we stand with our siblings at the mosque.
Mr Omar Farouk replied to the letter in a very warm and gracious manner. He said they would be happy to have the sign. Jill Linkert from our church put time and creativity into the making of the sign, and we were very happy to have it delivered to the mosque today. It is a symbol of our love and caring for the people who make up the IMO.”
Haji Omar expressed his and IMO congregation’s gratitude for the wonderful and thoughtful letter and signage to express solidarity within the faith communities. To the Trinity United Church congregation, Haji Omar said: “we will always treasure your open-heartedness and consideration”.
SHARE TWEET PIN SHARE

Bridgetown, Barbados: “The Jewish people have a legal and moral right to establish their homeland in Palestine and they have done so.” Dr Peter Laurie,…