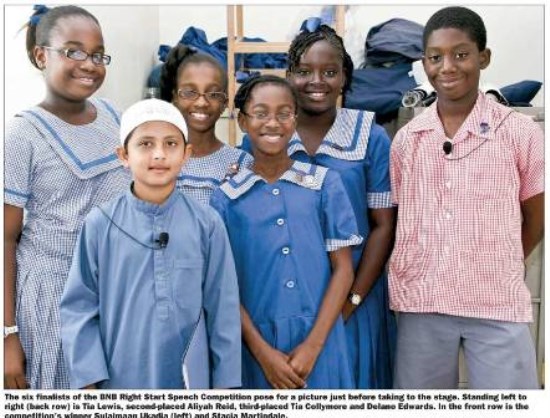 He was first on stage and, after a clever take on the game of cricket in a speech entitled “Cricket – A game that incites passion”, Sulaimaan Ukadia of the Al Falah Primary School was first in the eyes of the judges at the inaugural Barbados National Bank (BNB) Right Start Primary School Speech Competition.

Competing in the final yesterday against a field that included Tia Lewis and Aliyah Reid of West Terrace Primary, Tia Collymore and Stacia Martindale from St. Albans Primary and Delano Edwards, the headboy from Cuthbert Moore, Sulaimaan’s presentation on the game he loves was truly a pleasure to behold. Setting the bar extremely high with a presentation that was delivered without notes, flash cards or any required prompts, the young man was almost flawless as he took the audience through the history of the game, the important and even heroic figures of the present day and the passion he holds for the sport, which he plays on the field – and inside his home … when his mother isn’t looking.

Fighting off impressive deliveries from second-placed Aliyah Reid, whose piece “Talk de Bajan talk” showcased the importance of indigenous and colloquial language in the realm of communication, and Tia Collymore’s “Shaping today’s youth for a brighter future tomorrow”, Sulaimaan’s victory was not one to be taken lightly.

In fact, it should be noted that the standard of speech and the cleverness of all the contestants in their respective pieces was so high that Prime Minister (Ag) and Minister of Education, Ronald Jones, ended his opening speech to the gathered audience with the hope that this speech contest will not only attract more primary schools in the future, but also develop and move into the secondary schools of Barbados.

Quoting Martin Luther King, Jones noted that “A riot is the language of the unheard”, and for this reason it is important that we equip our young people with a voice. Highlighting great orators in addition to King, such as late Prime Ministers the Rt. Excellent Errol Barrow and the Hon. David Thompson, alongside the likes of Ghandi, Lincoln, Mandela, and even Shakespeare, Jones noted that language is a powerful tool for persuasion and understanding of language is the key to uncovering the truth behind the words.

With the gathered audience of students, family members, teachers and BNB employees completely flattened by the presentations of the six finalists, the opening remarks of Senior Manager, Administration and Operations, Juta Thorpe became even more palpable as she pointed out that our investment in our children must go beyond furnishing them with material things. Our investment should be focused on giving them our time and energy and in the case of the BNB Right Start Speech Competition, a stage from which to shine.

Be the first to comment on "Bajan Youth wins speech competition" 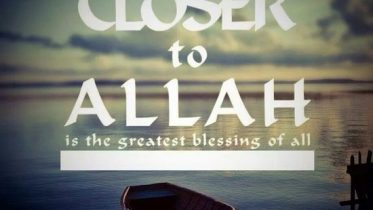 Within the first revelation that Allah revealed are important lessons for mankind.  Usually the first five verses are the ones that are normally referenced; however…