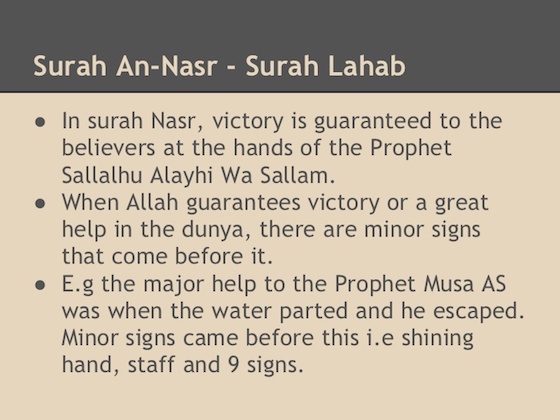 ‘When comes the help of Allah, and victory, and Thou dost see the people enter Allah’s Religion in crowds, celebrate the praises of Thy Lord, and pray for His forgiveness: for He is Oft-Returning (in Grace and mercy)’  (110)

We normally relate this chapter to the time of Prophet (ﷺ uwbp) when his mission was drawing to a close.  And mention is made of Umar (ra) because when the Muslims started rejoicing of the fact that Islam has been perfected he began weeping and said ‘don’t you know that the Prophet’s  mission has been completed and he will now return to his Lord?’

What does this Surah mean for us though?  We know it has some sort of relevance because Allah  says the Qur’an is ‘guidance for mankind’.  How then does Surah Nasr relate to our mission, our life and our goal?  The Qur’an explains itself; we are not authorised to assign any sort of meaning to it.  Even when the revelation was sent to the Prophet , Allah  sent the meaning and the wisdom behind each and every letter.  And we know that Prophet  never said anything out of his own desire/ego.  Everything was on the basis of Divine revelations.

Some may say that Surah Nasr is not applicable to us since Allah  is referring to the mission of Prophet  alone.  Does it then have any relevance to us today?  Yes, because the Qur’an is the message for all times.

Prophet  was a Messenger before creation.  It is recorded in the books of ahadith that Prophet  Muhammad is reported to have said ‘I was a Prophet while Adam was still between water and clay’.  Imam Ghazali writes that Allah  created the Light of Muhammad , his soul, first.  He created all and everything from the Light of Muhammad  thus all the other souls came from Muhammad’s .

Fath means victory.  In the time of Prophet  it related to his mission and when it matured and a lot of people were entering into the fold of Islam.  His personality was the most refine and he was created so pure and perfect and was created free from all imperfections.  So if Prophet  was sinless who then is Allah  referring to in the beginning of Surah Fath;

‘Verily we have granted Thee a Manifest Victory: that Allah may forgive Thee Thy faults of the past and those to follow; fulfil His favour to thee; and guide Thee on the straight way; and that Allah may help Thee with powerful help.  It is He who sent down tranquillity into the hearts of the believers, that they may add Faith to their faith; – for to Allah belong the forces of the heavens and the earth; and Allah is full of knowledge and Wisdom; – that He may admit the men and women who believe, to Gardens beneath which rivers flow, to dwell therein for Aye, and remove their ills from them; – and that is, in the sight of Allah, the highest achievement (for man)’  (48:1-5)

Who is He referring to?  What kind of victory is Allah  speaking about?  We have already established that Prophet  was sinless, which meant that Allah  is speaking to the believers.

Understand that when the heart attains ‘peace and tranquility’, when this world has no effect on you, when you only seek Allah’s  pleasure and forgiveness, He will forgive all the past sins and the ones that are to come.  This is one of the goals of a Muslim’s life; to reach a level where your only concern is Allah .

A beautiful example of this can be seen in the conduct of the Great Sheikh, Abdul Qadir Jilani.  Once his ship sank and when he realized what had happened he immediately said ‘Subhanallah’ [God be Glorified], illustrating that the worries of this material  world affected him not.

And Allah  makes mention of such an understanding in Surah Hadid;

‘In order that ye may not despair over matters that pass you by, nor exult over favours bestowed upon you. for Allah loveth not any vainglorious boaster’

Keep in mind that when the heart attains peace and tranquility Allah  will bestow his forgiveness on you.  Work to achieve this.  It is a real jihad because no one can do it for you.  It is just you and your Lord.  Remember whatever is for you, you will get it and whatever tests you undergo has already been written for you.  Beg Allah  to make this life easy for you and attach yourself to Him and insha Allah He will bestow that tranquility in your hearts.

Be the first to comment on "The Manifest Victory from Allah" 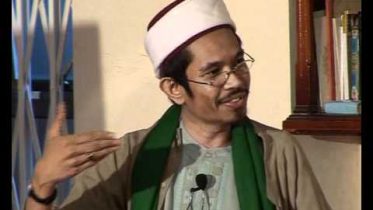 Introduction In the Name of God, the All-Beneficent, the Most Merciful. Gentle reader, Peace upon those who follow right guidance! I am honored to present…