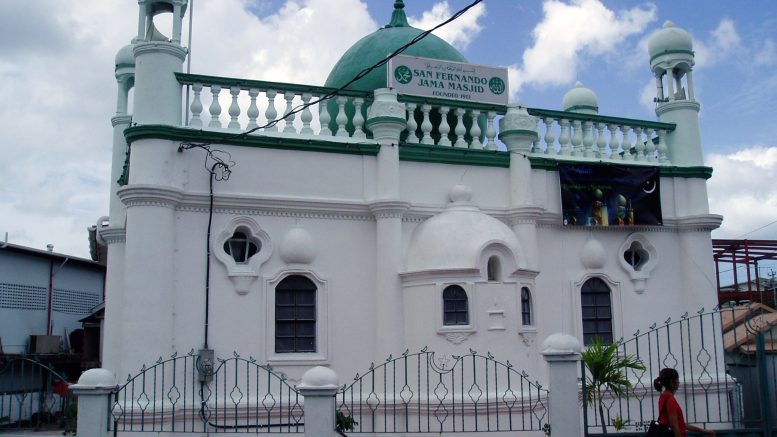 “Maulana Hassan was a member of the sole existing jamaat in San Fernando.  When conflict arose he decided to leave and start another Jamaat.   He got together with Brothers Asgarali Syne, Sheikh Bahadur Ali, Soman Ghany and Hafiz Yacoob Ali and they decided to pursue the matter.  They raised over fourteen hundred dollars and from it purchased the parcel of land on which it now stands for one hundred and fifty dollars ($150.00).  The parcel of land measured fifty feet by one hundred feet.

In 1913 they started in earnest with the erection of our Masjid and laid it’s foundation progressing steadily.  Around 1917 the building was finally completed and namaz performed in it.  It is a two storey structure of reinforced concrete, still retaining its original architecture.” 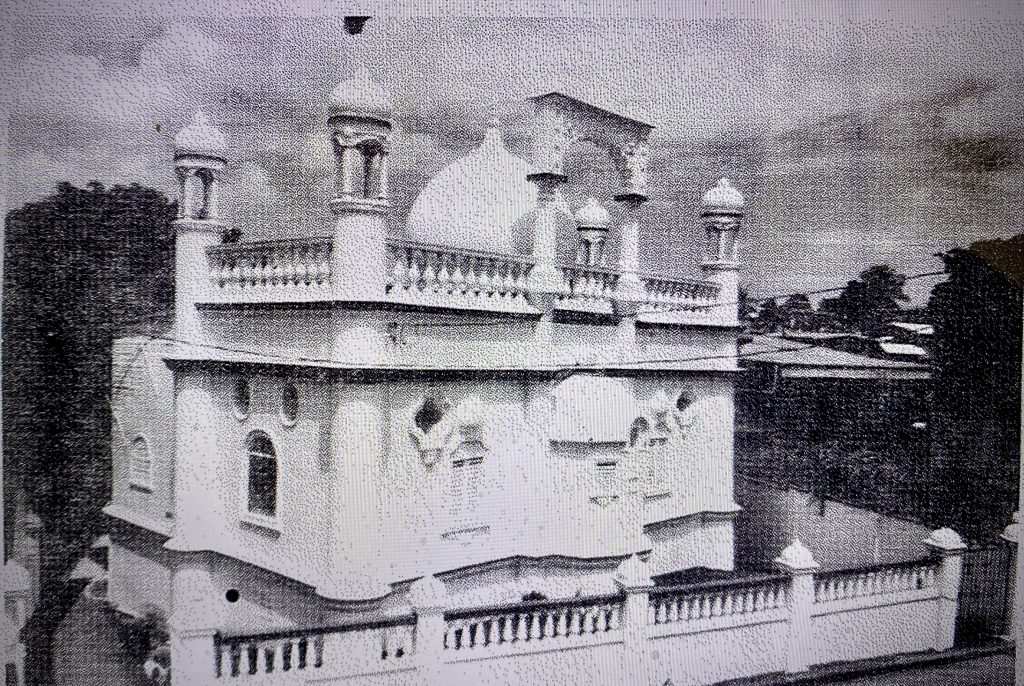 “It is rectangular in shape with a semi-circular portion protruding from the front.  There is a main dome in the centre of the roof and a minaret in each of its four corners.  There is ornamental concrete work on both the inside and outside of the building which has always been painted in white with green bordering.  On the front section of the outside is inlaid small sections of coloured glass which forms a picturesque outline.  Both inside and outside is visually quite pleasing and the workmanship quite good.”

Shortly after, there developed in the foundation on the northern side of the building a problematical fault which was soon solved through the engineering skill and knowledge of Haji Asgarali Syne.  Since then we have had one other problem with the building.  The roof has a slight leak which wets the carpet in a small area on the main floor whenever it rains heavily.  That area is located between the third and fourth of the eight columns in the middle of the Masjid when one is facing east.  Several attempts have been made to stop this leak which still persists and has proven to be quite evasive.  Efforts are in progress to have it solved.

Several years later, there was found need to extend the Masjid westwards.  This was subsequently done in 1940 with Brother S.M. Jaleel, now deceased, standing the expenses.  Following this was a bit of modifying and beautifying work undertaken in the Masjid at the Jamaat’s expense.  This consisted mainly of installing fancy ventilation blocks and ….  This work has enhanced the appearance appreciably.  On the southern and northern sides as one is about to enter the Masjid, are two picturesque but simple metal gates designed, built and installed by Brother Bennet Mohammed, one of the hard workers in our Masjid (for over a generation, up to quite recently). 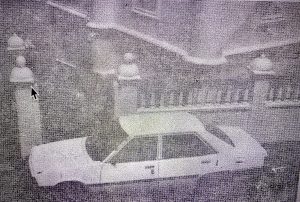 “When the structure was substantially completed need was seen for another entrance.  There had only been one at the time.  More land was needed.  Hafiz Yacoob Ali who owned the adjacent land southwards donated a piece of it and it is on this land a second entrance was built.”

Our first Muezzin was Brother Shahadath Khan.  Those who followed him officially were Brother Mohammed Sulaiman, Salamat Ali and Mayudeen Meah.  There is something about Brother Salamat Ali’s azan (call to prayer) that is worth mentioning.  Fishermen around Faralon Rock in the Gulf of Paria about two miles away westwards have reported that they heard his voice as he called azan for the Fajr namaz (prayer).  He had a most powerful and melodious tenor voice.

However following the death of Mohiuddeen Meah azan was called regularly by Haji Ahmad Khan for quite a few years.

Hafiz Yacoob Ali was the first official Imam of our Jamaat and led the first namaz.  Unfortunately we have been unable to determine which one of the five regular daily namaz it was.

Those who succeeded him officially were Imams Sheikh Kurban Ali, Imam Sakawat Ali, Imam S.M. Otham, Imam S.M. Hosein and Imam Gool Aziz, all deceased. (May Allah reward them justly).  Haji Imam Gool Aziz graciously stepped down to allow Moulvi Saied to take over as our Imam, remaining with us as an assistant Imam until resigning the post a few years after.

Imam Syed Mohammed Hosein from San Fernando.  Elected as the first President of ASJA Inc.  He was Urdu/Hindi interpreter in the courts and the first Muslim Divorce Officer.  Imam Hosein was a member of the Indian Advisory Council.  He visited India in 1934 as a delegate of the Muslim Community of Trinidad in search of a qualified Moulvi. At the end of 1935 Syed Hosien arrived with Nazir Ahmed Simab Munshi Fazli.  He was responsible for spearheading the debate against Qadianism with Moulvi Ameer Ali.  Syed Mohammed Hosein also served as Imam of Jama Masjid in San Fernando.

He was an ardent worker for the cause of Islam.  He organized and conducted Maktabs and Sunday Schools.  In many districts and was also Imam in those places.  He was well known for his varied ways of stimulating and motivating young minds towards Islam.  He was also a Muslim Marriage Officer.

He hails from Surat, Gujurat, India.  A qualified Moulvi from the Darul Ulum Islamia.  He left India in 1948 bound for Barbados.  He arrived in Trinidad in 1962 after residing in Barbados for fourteen (14) years.  In 1963 after the passing of Syed Muhammad Hosein, he undertook the responsibility of the Imamat.  Being well qualified in Islamic Law, Hadith and Quranic commentary, he conducted classes on these topics.  Two prominent features of his career of his career was a five (5) month Imamat course conducted at the San Fernando Jinnah Memorial Hall.  Fifty to sixty Imams benefitted tremendously from his wealth of knowledge.

He was the son of Imam Hafiz Yacoob Ali.  During Moulvi Saied’s tenure as Imam he served as the Moulvi’s Assistant.  He held the position of President of the San Fernando branch of ASJA for seventeen (17) years, a member of ASJA’s Central Executive for twenty six years, Chairman of Al Huda (religious) Committee of ASJA for six years, one of the islands first Muslim Marriage Officers, the Manager of ASJA Boys’ and ASJA Girls’ Colleges for eight years, a member of ASJA Education Board for twenty five years and was a founding member of Young Muslim Cultural League, now San Fernando Branch of T.T.M.Y.O.

Born in Penal, was Assistant Imam of the San Fernando Jamaat for the past eight years.  Besides being a Marriage Officer and in teaching in the Maktab, he shouldered the responsibility of Funeral Services,Qur’an kwaani and Moulood functions for members of the Jamaat.

At the time of his death in December 1986 Haji Baksh was serving as Assistant Imam of our Mosque.

He hails from Gujurat in India.  He has been Assistant Imam for approximately eight years.  Involved in teaching Arabic lessons to children from Monday to Thursday plus the responsilities of assisting in Qur’an Kwaani, Moulood and Funeral Services.

“The affairs of our Jamaat has always been entrusted to a Committee. In the beginning seven Trustees constituted this Committee. They operated under the umbrella of THE ANJUMAN QADREE formed by Hafiz Yacoob Ali shortly after he came back from India in 1898.  Two properties were donated in later years to our Jamaat.  No 21 Cipero Street by Brother Osman Ghany, and No. 64 Sutton Street by Haji Asgarali Syne.  Money from those properties which were rented, helped with maintaining the masjid.

Having joined the ANJUMAN SUNNAT-UL-JAMAAT Association shortly after its inception in 1935, all our properties were transferred to them, but were administered by us.  Subsequently the National Housing Authority, a state owned corporation, acquired Nos. 21 and 64 Sutton Street San Fernando for Ten Thousand Dollars ($10,000.00), which A.S.J.A. held in Trust.

As full payment, and with the consent of our then Jamaat Committee, A.S.J.A. purchased from Usine Ste. Madeleine Sugar Company, for the said Ten Thousand Dollars ($10,000.00), slightly over three and a half acres of land on Park Street, San Fernando.

On this land now stands the San Fernando A.S.J.A. School Complex.  The overall worth of the property is several million dollars.

We have a small Trust Fund in the name of deceased Haji Dymally SHeik.  Yields from the fund from which the capital of $8,000.00 cannot be utilized must be used for education.  Maintenance and other expenses are met from our masjid fund which is supplemented by regular subscriptions from our members, donations and collections from the Muktadees for Eid-ul-Fitr and Eid-ul-Adha.

We have over the years been administering a Zakaat fund and a Sadqa Fitr fund which we distribute promptly.  The Zakaat fund is always kept alive to facilitate the assistance of those who may seek our help.  This year (ed. 1983) there were twenty-three recipients from our Sadqa fund but more from our Zakaat fund.  Ever so often we receive special appeals for help which we may, if found necessary, refer to individual members who normally respond fairly well.”

“To satisfy a growing need, the Jinnah Memorial Hall was constructed in 1946. It is an annex which is actually connected to the Masjid by a passage way at the first floor level. Situated to the west of the Masjid, it is a simple two storey concrete building in which the first floor is mainly an auditorium.  At one time the floor was used as a Maktab.  Sunday School has been conducted in it regularly.  It is sufficiently large to comfortably seat around one hundred and twenty persons at any one time.

Many famous debates have taken place and many of our community members past and present have received their initial religious training there.

For the Eid-ul-Fitr, Eid-ul-Adha, Good Friday Juma Namaaz, and during the month of Ramadan when more room is needed, it is used by the ladies for performing namaz.

On the ground floor are located the men’s and ladies’ toilets, facilities for Wuzu and our recently built kitchen.  Originally there was a Muezzin’s room located there, but this has been broken down to relocate the men’s toilets and install a bathroom.  The toilets are completely isolated from the kitchen by a newly constructed wall.

Provided in the kitchen, (which is in-built in the Hall mostly used by the ladies for dining whenever we have functions), are cupboards, both portable and fixed.  Stainless steel sinks have been in-built in the fixed cupboards of which there are two.  Porcelain wash basins have also been installed.  We have so far been very fortunate to have pipe borne water, twenty hours per day.  With tables and chairs in their places about thirty-six persons can eat comfortably at any one time in the area.” 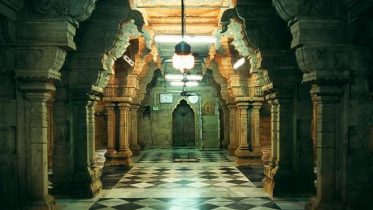 Among the many inscriptions at the Vaishnavite shrine of Adhi Jagannatha Swamy at Thirupullani, about 10 km from Ramanathapuram in southern Tamil Nadu, there is…