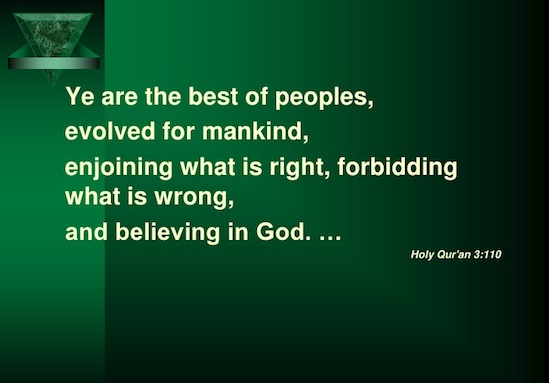 Allah  tells us about ourselves in the Quran,

‘Ye are the best of peoples, evolved for mankind, enjoining what is right, forbidding what is wrong, and believing in Allah’  (3:110)

What a great honour Allah has bestowed upon us.

If you look at history you will see that before the coming of Prophet Muhammad (ﷺ) Allah was very kind and generous materially, to the tribes and their people.  For example, the Israelites received immense material blessings from Allah.  Their food and drink came down from the sky.  They had next to nothing to do except glorify their Lord but they, instead tried to ‘scheme’ Allah.  They wanted Allah to be ‘their servant’.  They didn’t understand and were blinded by the fact that they were bringing harm and eventual destruction to themselves.

When the Israelite Messengers came and attempted to give guidance that didn’t suit their desires; they took the necessary measures to get rid of them.  For example, Jesus  came to them and began preaching; and they got offended.  When he invited them to join him in giving da’wah they placed conditions (they wanted food to come to them from the sky).  Yet Allah continued to take care of them.

In contrast to the treatment Allah gave to them, look at how different Islam started.  The blessed Companions of Prophet silently bore hunger, so much so, that they  used to tie stones to their stomach to ease the pangs of hunger.  Look at the difference between them and the favoured ones before them.  When the Muslims were faced with the boycott and had to retreat to the nearby mountains some of them ate stones.  They could have easily denounced Islam and return to luxury, but they didn’t give up.  They persevered even when death faced them.

Allah gives us the recipe for being categorised as the ‘best of people’ in the ayat quoted above.  Firstly, believe in Allah.  As we know this is the ‘password’ to enter Paradise.  Then we should enjoin good and forbid evil.

If someone believes in Allah and limits the good and engages in rampant evil it is possible that he can be categorised as a hypocrite.  In order to expound this let us look at the attitude of Umar .  The Prophet made a special dua for one of his Companions who thereafter possessed the ability of identifying a hypocrite.  So gifted was he that whenever there was a Janaza of a hypocrite he wound not attend and this led at Umar  to scan the crowd to see if this particular Companion was present.  If he was not present Umar  would refrain from leading the Janaza, because he knew the deceased was a hypocrite.  Everyday Umar  would visit this blessed companion and ask, “am I a hypocrite?”

Why make mention of this?  Sometimes people can do lots of good but they do it with an ulterior motive.  So we need to purify our intentions in order to safeguard ourselves from falling into the category of hypocrites.

Maulana Abdul Aleem Siddique  use to say “examine yourself”.  Everyday take a look at yourself and see what condition your faith is in.  The Prophet (pboh) is reported to have said “faith can increase or decrease”.  Today you may feel highly spiritual but always remember tomorrow is a different day.  What if you are faced with a trial, how will you react?  Guard your faith and strengthen it by adhering to the good Allah has prescribed and forbidding the evil, He has warned us about.  If you apply this insha Allah you will be classified among the ‘best of mankind’.  Regardless of a person’s wealth, power and status the recipe is universal.  It is very easy to say, but it requires some effort to put in practice.

We beg Allah to bless us with the determination to infuse this principle in our daily lives so that on that Day we will rise among the best and be among the inhabitants of Janatul Firdus, insha Allah.

Be the first to comment on "The best from among mankind" 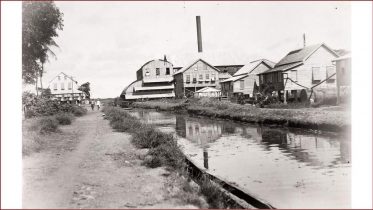