A True and Tolerant Religion

Let me explain. God Most High has sent us His Messenger Muhammad, may God bless him and give him peace, with the true and tolerant religion. He imposed no constraint upon us in the religion. Any requirement above and beyond that of wayfaring which is not in line with the means of the people is divisive, produces controversy, and leads to the absence of proper guidance and of the one essential thing required of the servant-namely, sincerity in worshiping God, may He be exalted and glorified. The only thing that might prevent the servant from progressing through the stations of servanthood is a yielding to his passions.[i] Every passion is manifest to him, for they are undeniably part of his constitution and creatureliness. How could a person be unaware of his interior state so long as he demands an account of his lower self, acts in good faith toward his Lord, and strives for purity of heart?

The seeker must therefore apply himself to resisting his lower self in all temptations as long as his resistance does not threaten him with mental or bodily harm. He must persist in refusing to cling to whatever comes along that could cause him to fall back on his own devices and understanding, in whatever difficulty he experiences. In fact, the difficulty itself will be of greater benefit to him. The net result of calamities that befall the seeker, and which he discerns in the course of going against his lower self, is that they invite him to a variety of acts of obedience. However, the seeker may be unaware of this purpose and fight off the trials, thus losing the opportunity for obedience. The same is true of one who refuses to adhere to what his mind grasps when some rational I truth becomes apparent to i.e.: He ignores it and pretends not to notice it. But trials pose no danger to him. On the contrary, they are the clearest course to follow. The servant is ever the one whose lot is weakness and insufficiency, even if he is totally successful in both knowledge and action.

For the seeker, reliance on this self-discipline I have been describing will become an occupation that will protect him from distraction and deviation from the highway of full spiritual realization, and from exposure to dangers and susceptibility to all sorts of injuries. The person who pampers his lower self, either by failing to fast or by fasting too strictly and for too long, without several days’ respite, has already gone far astray. The same is true of the person who likes to give away all that he possesses without keeping some for himself; or the one who delights in seclusion in mountain recesses or sequestering himself in deserts without ever taking a break and resting awhile at home. Hidden tendencies of the passions[ii] cause all these things. Treatment is difficult; it requires religious and secular testing suited to the illness.

It is better to remain within the limits of the Revealed Law and travel the road of piety and fear of God, for there is no passionate tendency in that whatsoever. One call then intensify his vigilance in moderating the lower self and its proclivity for the extremes of negligence and excess. If the servant remains sincere in all his states, God Most High will keep and support and protect him from destruction. He will lead him, and send him to an insightful spiritual guide who will delight him. The servant’s task is to make a beginning; that of God Most High is to perfect and bring to completion. And from first to last, the matter is in God’s hand.

This is what has occurred to me as a response to your inquiry. I am fully aware that by getting involved in what does not concern me I have over stepped my bounds and am guilty of inappropriate behavior. From God Most High I seek forgiveness, indulgence, and pardon; for that is His proper domain. He gives me enough of those things and is the best of patrons. Let us ask Him, may He be exalted and glorified, to show us the truth as true and give us the ability to follow it; to show us the false as false and destine us to abandon it.[iii] And may God bless our Master Muhammad and his Family and Companions, and give them perfect peace.

[iii] . IA may he alluding to a Tradition that was popular among Sufi’s, but not contained in any of the standard collections: “Show, me things as they truly are,” or, in another version, “Let the false appear as false, and the true as true.” See LJ 94. 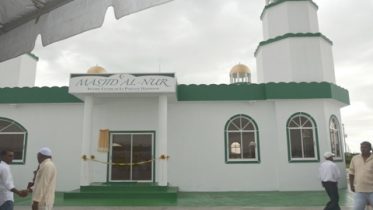 Georgetown, GINA, July 30, 2011 – President Bharrat Jagdeo today expressed satisfaction over the level of tolerance that Guyanese now enjoy. He said this could…