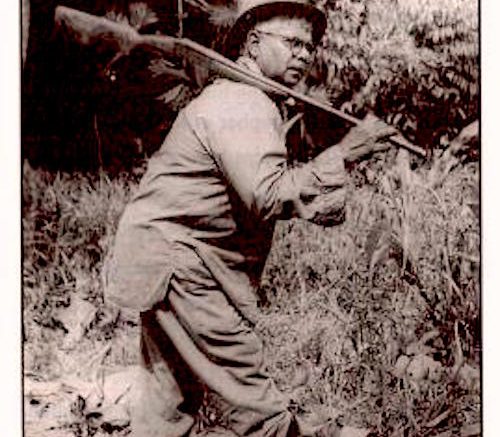 Rajali and Isahak, his elder brother, my uncle were together most of their adult lives, working and living together. They were as the proverbial “two peas in a pod.”

Rajali was the seventh child of Peerally and Kosemeea two indentured labourers. They had eight children in all.  Rajali, his spouse, Rahattan, Saphralli and Sarephan, Their two children together, with Raza and Saleeman, two children of Rahattan by previous marriage to Imam Karam Hosein, deceased, lived together. With Isahak, Goolan Hosein (uncles) and Haniff (cousin), son of Abdul Gulab, eldest son of Peerally, who lived at the same home for a while.  Peerally, from my memory, was a little old man. He wore white kurta and dhoti. He had silver grey hair and beard can remember an incident when my brother and I playfully blew out his lighted match while he was lighting his pipe.

He got angry and punished us. Soon after this he left this world, a great loss to all. (To Him we belong and to Him we surely return). May Allah forgive him and shower him with blessings.

Father, Rajali always reminisced of the hard times, working for 10 cents a day on the estate and how he collected and sold bottles to help his family. My uncle, Isahak, worked with Caroni and eventually joined the family. He came with his cash saved and bought the first parcel of land from Doolarie in Poole to be owned by the Peerally clan. With income from the land and hard work by all, more lands were bought at Riverside Road and this is where I was born.  Of the children, Isahak was the most academically accomplished which assisted greatly in their dealings.

A large estate was later purchased in Biche from earnings of the brothers and it was indeed a trying experience to commute by foot and donkey cart from Poole to Biche.  From the land the two brothers went into the sweet drink business. The bottles used were sealed with a marble and produced on a Shaker machine. Goolam Hosein and Raza assisted in this and from a donkey cart to transport, they purchased a small vehicle to sell their product.

They also went into transport, running a bus service between Rio Claro and Princes Town. Haniff did the transport business driving a truck transporting groceries and other items on contract. In all of this the cocoa and coffee estates continued to be tended and the soil tilled with other crops grown for profit. When cocoa prices slumped in the early thirties the brothers were not daunted, they went into the charcoal business wholesale and retail.

In 1936 my father Rajali moved his family to San Fernando on High Street on a property bought by the brothers.  They rented part of this and also operated a retail shop. My mother ran the retail business, my brother and I assisted.

My aunt Sahidan was encouraged also to come to San Fernando with her family and she opened a retail shop, trading in provision at Coffee Street and Crosbie Lane. Haniff, my cousin, also moved to San Fernando with his wife, Sheila and children and lived at Drayton Street until his death in 1965.

The business continued to grow with hard work and diligence until the depression years and the second world war.  The brothers being in the coal business obtained the contract to supply the allied army with firewood, charcoal and petro coal. This proved beneficial to all and could very well have been the turning point in their enterprise and a boon to their efforts. More help was needed and so Raza also moved to San Fernando to work. When the war ended in 1945 they moved into the soft drink business in San Fernando at High Street. A second hand bottling machine was bought, an automatic ons and profits realised resulted in the further entry into real estate, building income producing properties.

The Biche estate at this time too, was reactivated when the witch broom disease was brought under control and so the trek was from San Fernando to Biche with a crew of workers from Gasparillo and much time was spent on the estate with a house there renovated. A cocoa house was built in San Fernando atop the High Street property to process and cure the crop. Coffee was also processed. My uncle, Isahak, due to an old injury, lost his sight in one eye by this time and so staff was employed to drive the vehicles in the business. In all of this a great deal of love and caring was developed between the two brothers, Isahak and Rajali.

Their dedication to work and business did not daunt their spirit to ensure the children and family develop their spiritual sense of responsibility. They were all exposed to Arabic and Urdu training even when they moved to San Fernando.

Academic education was a must and the children were sent to Secondary School. Saphralli went to Naparima College. I went to Naparima Girls High School. Acklima and Taslima joined us in Secondary school at Naparima Girls. Taslima and I obtained our Cambridge School Certificate. I went on to study abroad in 1952 and graduated in Radiography. Prior to this I worked in the family business. Taslima, after teaching for a while went on to nursing in the United Kingdom and became qualified as a Healthvisitor and Midwife. Acklima and Saphralli got married and had their families early in life. The last addition to the Isahak family was Haneipha, a lovely daughter.

Business was stable and progressive. The brothers decided to separate their joint assets and in 1953 they allocated to each family and Goolam Hosein and to Haniff, portions of the estate.

Rajali continued his business. He was a man of sound principles and well respected in the community. He was charitable in nature and always believed nothing was impossible to achieve if pursued with diligence and honesty. He worked extremely hard to the very end and so on the 4th October 1962 he went to rest and to the great beyond. His elder brother, Isahak predeceased him in 1956. May Allah be pleased with them both.

My own mother, Rahattan survived my father for 19 years and died on the 4th January 1981. May Allah be pleased with her.  Saphralli, my brother and his wife,Assiran married in 1942 and had eight children- seven girls and one boy. My father got great joy in his grandchildren and cherished them. My brother went into his own business, farming and a driving school and later moved to Port of Spain in the air condition business. On the 24th June 1996 he died and joined our parents.

I returned from the United Kingdom in 1957 and worked for 30 years as a Radiographer at the San Fernando General Hospital. During this time I adopted two children, Stephen and Cameela. They were loving and caring and brought great joy to me.

We all continue to be in touch with each other and we cherish the development and growth of the descendants of Peerally and children, cousins and the many other offsprings too numerous to mention.

Be the first to comment on "The life of Rajali"