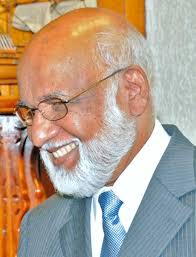 Nizam Mohammed was Speaker of the House in the 3rd Republican Parliament (1986 – 1991) of Trinidad & Tobago.   Mr. Mohammed is a former Member of Parliament for the constituency of Tabaquite.  Today, he is a practicing Lawyer .

He like “, …….and most other Trinidadian Muslims, traces his ancestry to the Indian state of Uttar Pradesh. “My great-grandparents came as indentured servants around 1845. They were among the first arrivals in Trinidad,” the Port-of-Spain attorney told Aramco World . “To lure them into coming, these people were told that Trinidad offered the best prospects for owning land. Many of them died of frustration and grief.”

The indenture system, used by Trinidad’s British colonial masters shortly after slavery was abolished in 1834, was a form of unpaid servitude which usually required peasants, nearly all of them Hindus or Muslims, to work the sugar plantations for a term of years in order to pay off their debts or repay the often inflated cost of their passage. Inhumane living conditions were often accompanied by efforts to impose Christianity on the newcomers, regardless of their religious beliefs. “Because of the hardships these people faced in their early days and throughout their lives,” Nizam Mohammed said, “they never left any historical information behind. Today, many of us have no idea of our heritage in India.”

Mohammed, who is …….. London-educated, has no way of knowing whether his great-grandparents were among the 225 passengers aboard the Fatel Razeck, which brought the first indentured servants to Trinidad on May 31,1845. But he does know about his two grandfathers, Kallam Meah and Rajeem Meah. After serving their five-year terms of indenture – a status just one step above slavery – Kallam went into coffee and coconut farming, and Rajeem became a tailor. In later years, before the advent of the petroleum industry, Trinidad would owe much of its economic success to these early Muslim farmers and merchants.”1 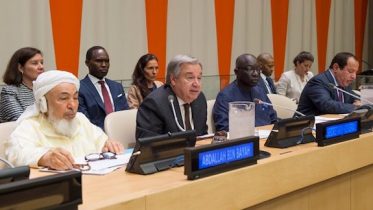 From 23 to 24 April 2015, Mr Adama Dieng, the United Nations General Secretary’s Special Adviser on the Prevention of Genocide, the Centre and the…