The Muslim Community of Antigua and Barbuda is in the final stages of completing a new masjid.  With its 100 families congregation, there is an absolute need for a worship facility and community centre.  The Masjid also serve the needs of Muslim students of international students at the medical school. The masjid project is being managed by Antigua and Barbuda International Islamic Society. 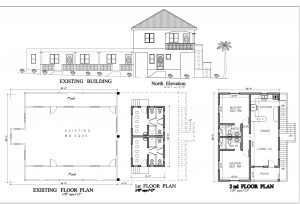 From the drawing stage, to the building is almost completed. 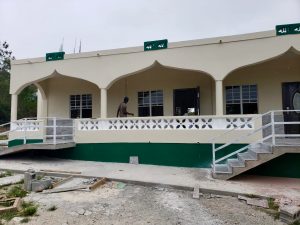 Speaking to CaribbeanMuslims.com Owolabi Elabanjo from Antigua and Barbuda International Islamic Society said “We still have the bathroom and the Wudu place to build. We still looking for donations and assistance to build. Your generous donation and support are highly appreciated. May Allah swt continue to shower his blessings and mercy and grace and protection upon us. Keep safe. Ramadan Kareem.”  If you’d like to assist this small community to sustain and build its needed Masjid please contact Brother Owolabi at owo_labi_1@yahoo.com.  Also, add a dua for the success for this masjid project and the community.

Antigua has a population of 96,286, mostly made up of people of West African, British, and Madeiran descent.  Islam is the predominant religion of the West African interior and the far west coast of the continent (70-75% of West Africans) and was introduced to the region by traders in the 9th century. Islam is the religion of the region’s biggest ethnic groups by population. Islamic rules on livelihood, values, dress, and practices had a profound effect on the populations and cultures in their predominant areas, so much so that the concept of tribalism is less observed by Islamized groups like the Mande, Wolof, Hausa, Fula, and Songhai, than they are by non-Islamized groups. Ethnic intermarriage and shared cultural icons are established through a superseded commonality of belief or community, known as ummah.  Traditional Muslim areas include Senegal, Gambia, Mali, Mauritania, Guinea, Niger; the upper coast and inland two-thirds of Sierra Leone and inland Liberia; the western, northern and far-eastern regions of Burkina Faso; and the northern halves of the coastal nations of Nigeria, Benin, Togo, Ghana and Ivory Coast.

The English settled on Antigua in 1632;  Christopher Codrington settled on Barbuda in 1685. Tobacco and then sugar was grown, worked by a large population of slaves from West Africa who soon came to vastly outnumber the European settlers.  It is not a stretch to suggest that most of those enslaved souls from West Africa were Muslims.  The inhumane system of slavery dehumanized African slaves and Christianized them.  Conscientious seekers for meaning, authenticity, and identity have reverted to Islam.  The Masjid and Community Centre is a key infrastructure to bond and build the Muslim community in Antigua and Barbuda. 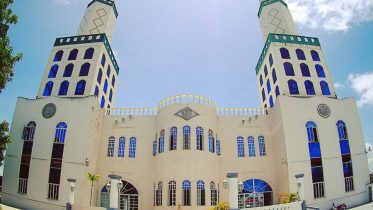 President of Guyana, Dr Irfaan Ali, in a short address to the worshipers assembled at the Queenstown Masjid, Georgetown, Guyana, for Jummah (Friday congregational prayer),…