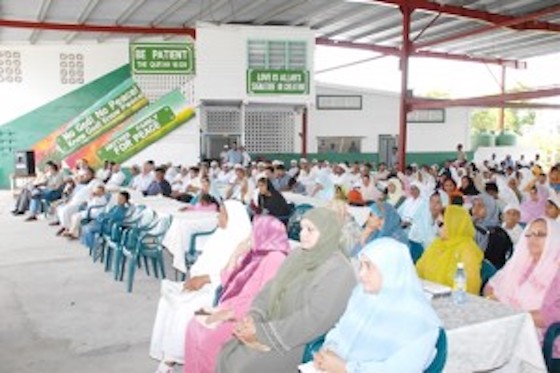 Part of the gathering at the Central Islamic Organisation of Guyana on Woolford Avenue for yesterday’s Youman Nabi celebrations. (GINA photo)

In his remarks, President Jagdeo said he hoped that this celebration would help persons to heed the lessons involved and would serve to improve their lives.  He said United States President Mr. Barrack Obama deserves much commendation as the issue of peace in the Middle East was among the first things that his Administration dealt with.  He further stated that President Obama’s early socialization with the Muslim community gave him insight into the world of Islam, and he noted that he was pleased with Obama’s initiatives in this regard. President Jagdeo said the United States President brings hope when it comes to lasting peace in the Middle East and solving the Palestinian issues.  He noted that this is an important issue largely because of the injustices that the Palestinian people have to endure. “We can’t turn a blind eye to their suffering,” he said.

The President said, “Not things we can touch, but it is the intangible things that usually determine the quality of life”. As such, he said, the one thing he would mostly like to see change is the relationships among people.  He continued that the only way Guyana can deal with its true issues is if there are improved relationships and issues are addressed in families and homes.  President Jagdeo also observed that other religions need to be more educated about the Muslim faith since the message of Islam relates not just to Muslims, but to all.

He said he does not necessarily support the ban of alcohol and the like, but noted that people’s commitment not to succumb to such things is important, observing that the society had such things even when Jesus Christ and the Prophet Mohamed ﷺ walked the earth.  The President reiterated that what matters most is how strong a person’s character is.

President Jagdeo also mentioned that Cabinet is currently discussing the possibility of taking all children out of orphanages and placing them in homes. He said this initiative is being undertaken because children hold the promise of a brighter future.  He ended his speech encouraging all to read and focus on their relevant scriptures.

Meanwhile the Honourable Prime Minister of Guyana, Mr. Samuel Hinds,  PNC/R’s Mervyn Williams and AFC’s Leader Mr. Raphael Trotman were part of the program organized by the Muslim Youth League of Guyana, The Guyana United Sadr Islamic Anjuman and the Anna Catherina Islamic Complex in observance of Eid Milad-un-Nabi 2009 (Youmam Nabi) in honour of the birth anniversary of the Beloved Prophet of Allah (s).  Prime Minister Hinds, brought greetings of the government to the Muslim community, PNC/R’s Mervyn Williams spoke of the great teachings of Islam and AFC’s Leader Mr. Raphael Trotman complimented the Muslim community for its contribution to the cultural diversity of this great country. The program included qaseedas, messages and Quranic Exhortations.  In attendance were representatives of Muslim organizations from Trinidad, Suriname (led by Al Haj Djameel Ashruf), Holland, Canada and guests from Sri Lanka as well as Imams and Presidents and representatives of jamaats and Muslim organizations in Guyana.

The CIOG also arranged a broadcast of a special message from Imam Zaid Shakir  of Zaytuna Institute, California, USA on Guyana’s television stations.  Imam Zaid Shakir reminded the audience the reasons why the Prophet (s) of His (s) most outstanding qualities that enabled him to reach out to the harshest of people and those who showed enmity towards him, provided a brief mention (by examples) of the relationship between him and those who accepted his invitation.  Imam Zaid further spoke about the manner of praise, honour and elevation indicated in references from the Qur’an.  He elaborated on what does it mean to celebrate his birth as Muslims throughout the world do not only once per year (in Rabi’ Al-Awwal), but daily, weekly and monthly.   Imam Zaid also called upon Muslims to re-connect with the Prophet (s) and generally their relationship with/responsibiity towards him.  In concluding, Imam Zaid called on people of faith to come together in an “Alliance of Virtue” to help tackle the many social issues facing humankind today. 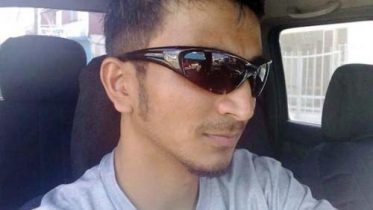 NAAIL ALI, 26, was kidnapped outside his family’s Gasparillo hardware at about 8.45 am yesterday by three armed men and up to late yesterday, no…