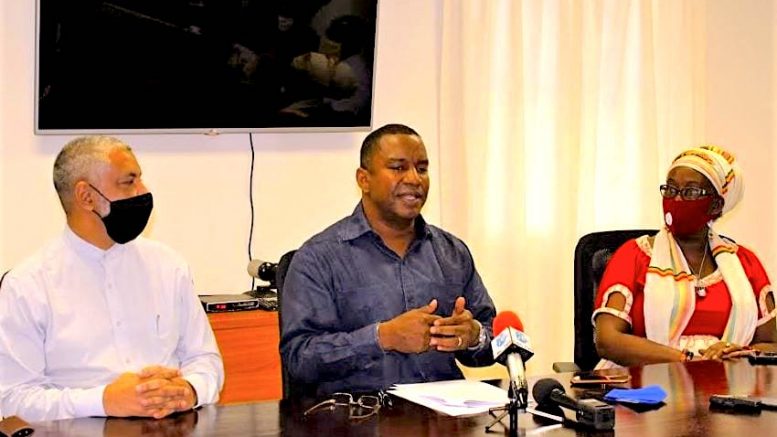 Barbados Minister of Home Affairs, Information and Public Affairs Wilfred Abrahams (centre), announces that headwear will be allowed for the taking of official photographs; while Secretary of the Barbados Muslim Association, Suleiman Bulbulia (left) and Chairperson for the Ichirouganaim, Asheba Trotman, listen intently. (GP)

Barbadians whose religious beliefs mandate that they keep their heads covered, are allowed  to take official photographs with headwear.

This follows Cabinet approval on Thursday, October 1, for the wearing of head coverings for religiously mandated purposes during the taking of official photographs, such as the Barbados Identification Card, passport and driver’s licence.

Minister of Home Affairs, Information and Public Affairs, Wilfred Abrahams, made the announcement during a press conference at the Ministry’s Wildey, St. Michael office this morning.

“The standard is that you must not cover your head. That is a general standard and the general law in Barbados. However, if you are a member of a recognised religion in Barbados… and your religion mandates that you cover your head, or cover your ears, then you are free to take your passport photograph once you provide proof…for the Chief Immigration Officer that you are a member of that religious organisation, and that religious organisation does have these rules in place…,” he stated.

The Minister explained that representatives from the Muslim and Rastafari communities raised the issue of discrimination with Government, stating that they should be allowed to practise the edicts of their respective faiths.

Mr. Abrahams said the Chief Immigration Officer advised that there were standards established by the International Civil Aviation Organization (ICAO) regarding photographs for e-passports.

“The ICAO guidelines on passport requirements state that the head coverings are not permitted, except for religious reasons, but the facial features from the bottom of the chin to the top of the forehead and both edges of the face must be clearly shown…,” he said.

The Minister further pointed out that Barbados accepted passports from persons of other religions arriving from countries such as the United States, Australia and Canada, which allowed for head coverings.

“So, if we would accept that for other countries, there was really no good reason why we should continue to discriminate…against the religious practices of our brothers and sisters in Barbados,” he stated.

Mr. Abrahams stressed that the principle was one of general application and was not gender specific, as it applied to both males and females.

He also gave members of the Muslim and Rastafari community the assurance that Government was working to address instances of indignity, discrimination and anomalies when they were brought to its attention. 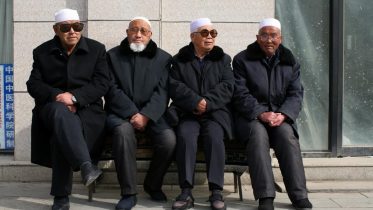