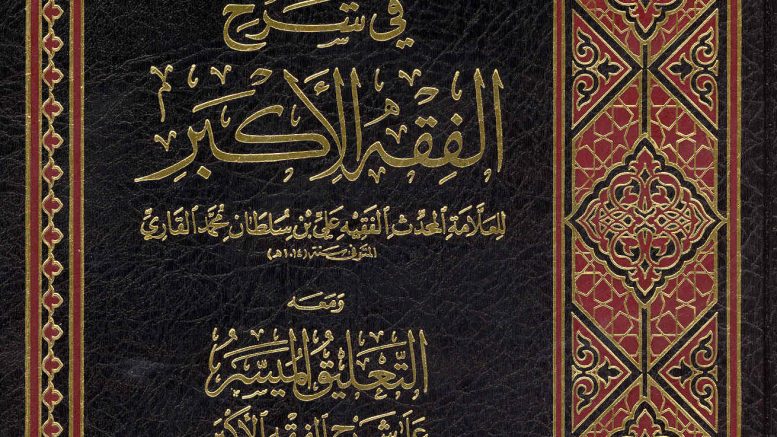 [The following statement appears before the translation of the actual text — obviously inserted by someone other than Imam Abu Hanifah — probably by the eminent translator himself. — Editor . . . “One of the most regrettable features of the contemporary Muslim situation is an anarchy and confusion in the sphere of belief that might lead one to suppose the foundations of Islam to have been so obscured that the field is open to anyone to redefine the religion. We begin with the Fiqh al-Akbar of Imam al-A’zam Abu Hanifah, may God be pleased with him, a brief but comprehensive statement of the irreducible dogmas ( ‘aqa’id – sing.‘aqidah) of Islam.”

The editor agrees with the above comments of Professor Hamid Algar, the translator, and joins him in his lamentation of the contemporary Muslim situation of anarchy and confusion in the ‘sphere of belief.’ Alas our modern younger generation has neglected to include ‘Al-Fiqh Al-Akbar’ as an essential part of Islamic teaching curricula.

I recall fondly that ‘Al-Fiqh Al-Akbar’ was a part of my high school religion classes. I also remember, with fondness, the diligence with which our teachers taught these ‘aqa’id, impressing upon us incessantly just how essential it was for us to learn these dogmas. Even as a high school student it was not was not difficult for me to realize the beauty of the brevity, conciseness, and comprehensiveness of the beautiful work of Imam Abu Hanifah. Even as a student at this early stage of education, we were left with no doubt in our minds that a full understanding of the articles of Abu Hanifah’s creed were imperative for our practises as a Sunni-Hanafi followers of Islam.]

In the Name of God the Compassionate, the Merciful

The root of the affirmation of God’s unity, and that which is correct conviction, consists of this, that one says:

1. I believe in God, and His angels, and His books, and His messengers, and resurrection after death, and that the good and evil of destiny are from God Most High. I believe too in the accounting and the scales, hell and paradise. All the foregoing is reality.

That which God Almighty mentions in the Qur’an as a narration from Moses and other of the prophets – peace and blessings be upon them – and also from the Pharaoh and Iblis, all of it is God’s word, and constitutes a report concerning them. God’s word is uncreated. It is the Qur’an which as the word of God Most High is uncreated, not their words, Moses, upon whom be peace, heard the Word of God Almighty, as God Almighty says: “God addressed Moses in speech.” Thus God Almighty was the speaker, and Moses, upon whom be peace, did not speak. God Most High was a creator in pre-eternity, even without having brought creation into existence: “there is naught like unto Him; He is All-Hearing, All-Seeing.” When God addressed Moses He did so with His word that was, like all of His attributes, an attribute existing from pre-eternity, unlike the attributes of created beings.

4. God knows, but not as we know; He has power, but not as we have power; He sees, but not as we see; He hears, but not as we hear; and He speaks, but not as we speak. We speak by means of the speech organs and sounds, whereas God Most High speaks with neither organs nor sounds. Sounds are created, and the word of God Most High is uncreated. He is a thing, but unlike other things; by saying “thing,” we intend merely to affirm His reality. He has neither body nor substance, neither accidental property nor limit, neither opposite nor like nor similitude. He has a hand, a face, and a self (nafs); the mention that God most High has made of these in the Qur’an has the sense that these are among His attributes, and no question can be raised concerning their modality (bila kayf). It cannot be said that His hand represents His power or His bestowal of bounty, because such an interpretation would require a negation of an attribute. This is the path taken by the Qadarites and the Mu’tazilites (two theological sects in early Islam that deviated from the path of Ahl as-Sunna – trans.) Rather, His hand is an attribute, of unknowable modality, in the same way that His anger and pleasure are two attributes of unknowable modality God Most High created things out of nothing, and He had knowledge of them in pre-eternity, before their creation.

5. He it is Who determined and predestined all things. Nothing exists in this world or hereafter except by His will, His knowledge, His determining and predestining, and except it be written on the Preserved Tablet (al-Lauh al-Mahfuz). He inscribed everything there in the sense of description, not that of foreordaining. Determining, predestining and will are pre-eternal attributes of unknowable modality. God Most High knows the non-existent, while in its state of non-existence, to be non-existent, and He knows too how it will be when He brings it forth into being. God Most High knows the existent, while in its state of existence, to be existent, and He knows too how will be its evanescence. God knows the one who is standing, and when he sits then God knows him to be sitting, without any change being produced thereby in God’s knowledge, or any new knowledge accruing to Him. For change and alteration occur only in created beings.

6. God Most High created creation free of both belief and unbelief, and then He addressed His creation with commands and prohibitions. Some men disbelieved through active denial and rejection of the truth by virtue of being abandoned by God Most High. Others believed through active assent and affirmation, by virtue of the succour of God Most High. He brought forth the progeny of Adam, upon whom be peace, from his loins in the form of particles, and appointed for them an intelligence. He then addressed them and commanded them unto belief and forbade them disbelief. They assented to His dominicality, this being a form of belief appropriate to them, and thus it is that they are born in the possession of a primordial nature disposed to belief.

Whoever disbelieves thereafter is therefore changing and altering that primordial nature, and whoever believes and assents is conforming and strengthening it. None of His creation has been constrained either to disbelieve or to believe; God created men not as believers or non-believers, but rather as persons. Belief and disbelief are acts of God’s worshippers. God Most High knows the unbeliever, in his state of unbelief, to be an unbeliever, and if he thereafter becomes a believer, then God knows him to be a believer in a state of belief, without any change occurring thereby in His knowledge or attributes.

First published in HAKIM here On the 18th of February 2012, Assembly of Intellectual Muslim (HAKIM) have sent six of their members to a lecture…