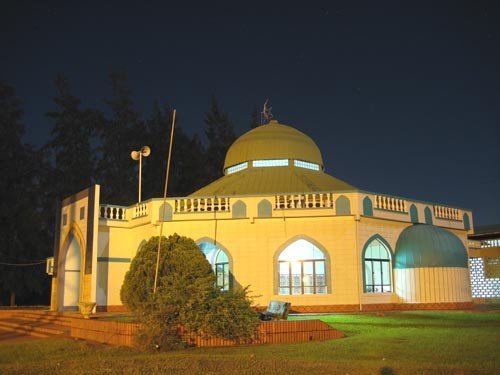 The urdu couplet written above is understood to mean the following:-

“The Masjid is the House of Allah
And the foundation of Islam
Keep this house alight, O Muslims
And Allah will he pleased with you”

The Masjid is synonymous with Islam and the Muslim community in any district, town, or city.

The history of Islam bean testimony to the fact that immediately on his arrival in Medina, the Messenger of Allah ﷺ gave instructions that a MASJID he built so that the Muslim community could be easily identified.  The unifying force in a Jamaat is the Masjid of that Jamaat and in order to achieve the goal of Islam every member of the Jamaat should consider it a point of duty to associate with all the activities of the Jamaat and the Masjid.

It is rather unfortunate that the Muslims of today do not consider the Masjid and its compound as their Community Centre, and as a consequence, several activities social and cultural, are either held at other places or not propagated at all. Of course, the proper approach must he made and the authorities must see to it that every activity in the Masjid or Masjid compound must conform to the principles of Islam.

It is quite noticeable that in today’s world, the vast majority of Muslims would wish to be left alone to live their lives as they may choose.  Those who seriously consider themselves as Muslims in the true meaning of the word – SUBMITTING TO THE WILL OF ALLAH – will have no choice of their own, will have no choice of their own, but to comply with the command of the Holy Prophet Muhammad ﷺ to leave their Homes and congregate in the Masjid.

The Masjid has the power to discipline the believers, and the pledge taken before Allah is a solemn sacred pledge on which the believer cannot go back. The Masjid being a witness to the pledge and promise made by anyone.

The duty of every member in the Jamaat is to ensure that the Masjid is filled with devotees and that the Light of the Masjid is maintained. Rancour, disputes and ill will are the main causes for disunity, and while Shaitan is doing his best to create fire in the minds of the Muslim brothers and sisters, the House of Allah, the Masjid, should not become a white elephant for Judgement day in the Court of Allah, the Masjid will speak against all those who after believing failed to bow down with those who bow down.

It is with great privilege for me to extend my best wishes and congratulations to the Imam and members of the Avocat Jamaat on the achievement of their new Masjid.

Jamaica, Our Faith, Our Region

Be the first to comment on "The Significance of a Masjid" 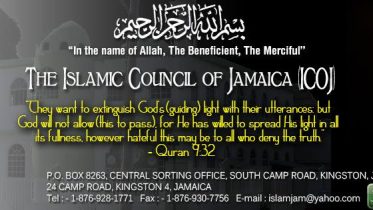