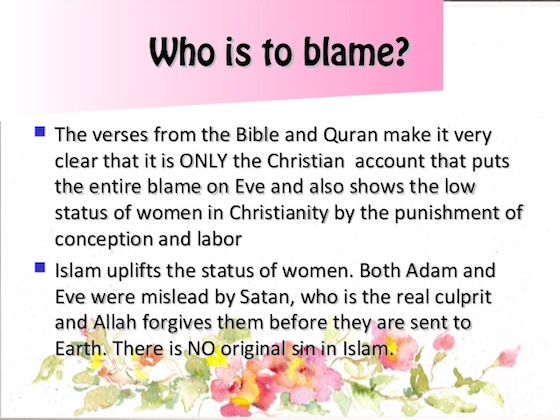 Those who uphold the theory of Original Sin give an analogy which goes like this: If a cake pan has a dent in it, all the cake baked in that pan will show the dent; in the same way, since Adam and Eve committed the sin all from his progeny are born sinners. What is the Islamic position on this matter?

According to the Qur’anic teachings, Adam and Eve did commit a sin out of forgetfulness, but when they realised what they did the repented, and Allah forgave them their sin. Allah says:

So by deceit he brought about their fall; when they tasted of the tree their shame became manifest to them, and they began to sew together the leaves of the Garden over their bodies. And their Lord called unto them; Did I not forbid you that tree, and tell you that Satan was an avowed enemy unto you? They said; Our Lord, we have wronged our own selves; if You do not forgive us, and bestow on us Your Mercy, we shall certainly be the losers. (7:22-23)

So Adam begged his Lord for forgiveness; and Allah says:

His Lord turned towards him; for He is Most Forgiving, Most Merciful. (2:37)

The point is; if you have a cake pan that is dent and you want to bake good beautiful cake, you can fix the dent and then bake, so that there will no longer be any dent. So when Adam begged for forgiveness and his Lord forgave him, there was no longer any sin to be blamed for.

According to Islamic teachings; every child is born free from sin, and is born with the belief that there is only one God called Allah. Prophet Muhammad (ﷺ pboh) if reported to have said that: Every child is born a believer; it is the parent who makes him a Jew or a Christian.

If we look at the implications of the theory of the Original Sin; which means that the sin which Adam and Eve committed could not have been forgiven by God so He had to come down on earth as a human being in the form of the Son; allowed Himself to be crucified; so the His blood can wash away the sin committed by Adam and Eve [as per Christian theology -editor]; we shall see so much of difficulties in understanding it. Take for example:

·    If all human beings are born in sin, when God came down as a Son—a human being [as per Christian Theology – Ed], He was also born in sin. Is it right to say that God came to earth with sin.
·    The next thing is that this theory does not allow God to express His Divine Attribute of being Most Forgiving.
·    Allah informs us in His Holy Words that: No burden soul can bear the burden of another. (6:164)  Prophet Muhammad (pbuh) is reported to have said: Allah the Exalted states to the posterity of Adam; that if you happen to meet Me with the sinful acts of the entire world; I shall meet you with an equal amount of Mercy, provided you have not joined partners with Me.
·    Islam teaches that: Good wipes out evil (11:114). So if a person knows that he committed a sin; he should turn to Allah in repentance and do some good in order to wipe out the evil.
·    Prophet Muhammad (pbuh) taught his companions to pray to Allah to cover their faults with a beautiful covering.
Muslims do not believe that we have to bear the burden of the sins committed by Adam and Eve.

Be the first to comment on "THE DENT CAKE PAN" 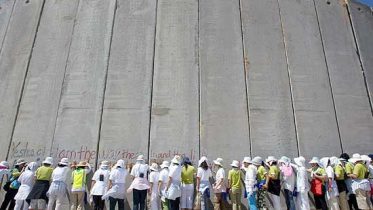 The premise of my very first column in Barbados TODAY back in November 2014 was an African proverb, “In crisis, the wise build bridges, while the…