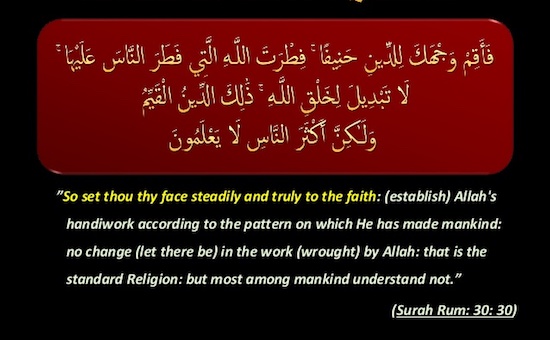 Allah  mentions in the Quran;

‘So set thou thy face steadily and truly to the faith: (establish) Allah’s handiwork according to the pattern on which He has made mankind: no change (let there be) in the work (wrought) by Allah’.  (30:30)

Some scholars are of the view that ‘in the work (wrought) by Allah’ refers to His creation.  So if we apply this to the ayat it will translate as ‘the creation of God will not change’.

If we narrow it down to mankind it will mean that the human species will remain as is.  They will not be subject to change just as Adam (as) came and then his progeny came in the same mould and fashion; centuries after Adam (as).

If Allah  says that He will not cause change to come on His creation, what then will happen to us on our onward journey.  Will we change or evolve into new creatures?  No, we will remain as we are and regardless of place or time we will not be subjected to change.

When you are resurrected, you will be resurrected as you were, except that each person will be resurrected with a complete and perfect body.  The difference will be the condition in which you are resurrected.  For example, just as how physical ailments may have an adverse effect on a person’s physical appearance; when the soul re-enters the body on the Day of Judgement; depending on the condition of the soul, the body will either be bright and shinning or dark and ugly.  So if a person took the time to polish the soul in this world, it will help brighten his countenance on that Day.

Even after the entry into Paradise, life continues as it was on earth.  The main exception is that there will be no impurities.  According to some scholars what Adam (as) and Eve (as) consumed from the forbidden tree was in fact wheat; and after they ate it they needed to excrete.  And because no impurity is allowed in the Garden they were expelled.  The point is that there will be no impurities in paradise.  The support of this is found in Surah Baqarah;

Gardens, beneath which rivers flow.  Every time they are fed with Fruits there from, they say: ‘Why, this is what we were fed with before’, for they are given things in similitude; and they have therein companions pure (and holy); and they abide therein (for ever).  (2:25)

The fruits, milk, honey, etc. will remain the same, except that it will never contain impurities, or become impure.  There will be no disturbance around you; only peace and tranquillity.  For example, if you have a bunch of mangoes; some are ripe and good for eating and some are a bit spoilt.  When you separate the good from bad both groups remain mangoes but one is free form impurity whilst the other contains impurity.  Since Allah  created all the creatures, their categories remain the same, regardless of time and place.  The birds, fishes, fruits all remained the same.

We need to understand that on our onward journey the environment, substance, etc. will remain the same except; it will all be free form impurities.  The challenges around us will not be present in the Garden of Bliss.  This is the life we are working towards.  Who wouldn’t want this?

And rest assured that Satan will try his utmost to corrupt you.  We all know a flame can be seen from far; but black mud, from which man was made, cannot be seen on a dark night, like the fire.  The problem with Satan’s perception is that this insignificant piece of mud which has the potential to attain such greatness is more advanced than him, even though, according to his reasoning,  fire is far superior than mud.  So the conflict remains.  We have to tolerate it and continue to persevere in order to qualify ourselves to attain the life of purity.

We beg Allah  to help us to understand and to resist the attacks from Satan and to enable us to work towards our goal, insha Allah

Be the first to comment on "The absence of impurity"

As published on http://buletinonline.net here. Documents printed” reads a handwritten sign hanging outside the first floor of a house on the outskirts of Santa Clara,…