Guyana has strong ties with Indonesia and Malaysia. Never mind that Guyana and Indonesia established diplomatic relationship only in 1999, ties between those two countries date back further. When Dr. Cheddi Jagan, a strong proponent of South to South cooperation was elected President of Guyana in 1992 he made a four-day visit to Malaysia in December 17-21, 1993. “The President who was accompanied by Senior Minister of Foreign Affairs, Mr. Clement Rohee, met with the Hon. Dr. Mahathir Mohamed for discussion on ways of improving the existing relations between Guyana and Malaysia.”1

In Malaysia, President Jagan visited a number of places of economic interest including the Samling Corporation which is part owner of the Barama Company and the South Investment Trade Technology Date Exchange Centre which now have investments in Guyana. The President also met with representatives of the Malaysian business community. And in 1995 the Government of Guyana and the Government of Malaysia signed a Technical, Economic and Cultural Agreement during the Commonwealth Heads of Government Meeting (CHOGM) held in New Zealand, in November. “Since the visit to Kuala Lampur by President Cheddi Jagan in 1994, during which Guyana and Malaysia established a Joint Commission, diplomatic initiatives have focused on the realization of closer economic and technical cooperation between the two countries”2

Since Guyana and Indonesia established diplomatic relationship in 1999 relationship has grown warmer despite geographical constrains. Indonesia now appoints an ambassador to Guyana and the two countries are looking to expand economic ties. However, since the end of the Jagan government little effort is made to develop strong economic ties with Southeast Asia.

In January 2007, Guyana’s Minister of Foreign Trade and International Cooperation Dr Henry Jeffrey and Indonesia’s Ambassador to Guyana, Suprijanto Muhadi signed a reciprocal trade agreement on the promotion and protection of investments in the two countries. The agreement makes it now possible for concrete activities between businessmen of the two countries. However, there is not direct trade between Indonesia and the region largely because the region is considered to be too distant to be competitive with the exports from Latin America and Brazil. This small start is expected to see reciprocal access to the Indonesian markets.3

More recently Indonesia has appointed an ambassador to Guyana who hosted to the 62nd Independence Anniversary of Indonesia at the LeMeriden Hotel in Guyana in August 2007. In attendance was the President of Guyana who remarked, “Countries and regions of the world are now being drawn closer together not just by the realities of globalisation but also by the common challenges which we now face together, such as terrorism poverty and climate change. I believe it is important for governments everywhere to embark on a consolidated and concerted effort to address these problems.”4 President Bharrat Jagdeo further stated, ““We are prepared to work with the rest of the international community to find global solutions to these global issues.”

The Head of State said solidarity and mutual support are especially important to the economic and social progress of Guyana and Indonesia. He said, “In the past, we have sought to work together in all relevant fora to ensure that the international trading system and other forms of economic cooperation are made more just and equitable.” 5

Guyana is looking to Indonesia could help Guyana in the agro-energy sector. Jagdeo continued, “I am aware of Indonesia’s expertise in agro-industry, tourism and other promising sectors. It is therefore, my hope that Indonesian investments and technical assistance can help us to open up fully these areas that are rich in potential.” 6

He continued in the same vein, “Special occasions such as its independence anniversary provide a nation with an opportunity to reflect on its history and to take stock of its achievements. Like Guyana, Indonesia emerged from the shadows of a long colonial past. Notwithstanding the many challenges faced in its early years of independence, Indonesia’s economy has enjoyed economic growth at a steady and impressive rate.” The Guyanese President praised Indonesia for its bold role in South-South cooperation both on a bilateral level and though international bodies such as the Non-Aligned Movement, the G-77 and the United Nations by keeping the spirit of Bandung alive within the family of independent nations.

A cornerstone of Guyana’s foreign policy is south to south cooperation and not surprising, President Bharrat Jagdeo said, “This ideal has motivated countries of the South to work together to develop mutually beneficial co-operation and a deeper understanding between their peoples. An important step in this direction was taken in 1999 with the formal establishment of diplomatic relations between our two countries. I am pleased to note that, despite the great distance which separates us, we have been able to develop strong ties of friendship and collaboration.” 7

On Guyana/Indonesia relations the Ambassador said though limitations persists the coexistence between the two countries bilaterally and multilaterally are positive. Ambassador Muhadi said, “With all limitations which – are existing, we have tried with optimism to increase the activities and programmes…exports from Indonesia to Guyana, which started long before the formal diplomatic relations were established, observably increases from one to another .” 8

According to the Indonesian Ambassador many nationals from his country work in Guyana. He said, “The Indonesian Embassy will -facilitate private sectors in both countries which attempt to create contacts. Indonesia is actively looking for any possibilities to develop the relation between the two countries. I hope that both Indonesia and Guyana will improve the bilateral co-operation for the betterment of both countries and peoples.” 9 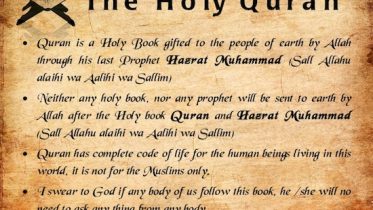 Allah  begins the message of the Holy Qur’an, after Surah Fatiha; This is the Book; in it is guidance sure, without doubt, to those who…