The 1979 Islamic Revolution of Iran marked a new beginning of Guyana/Iranian relationship. During the regime of Reza Shah Pahlavi of Iran the two countries did not establish diplomatic relationship. But after the 1979 Islamic Revolution, Guyana and Iran established diplomatic relationship in the 80’s, and through various multilateral organizations such as the UN, the Group of 77, the Non-Aligned Movement, and the OIC, has cooperated on various issues. Iran appoints a non-resident ambassador to Guyana, who is based in Caracas.

Former envoy of Guyana to the OIC, Dr. Odeen Ishmael, who deals with Iran says, “The relationship is very good. We do have diplomatic relations and consult regularly at the UN and within the OIC. Iran was one of the sponsors of Guyana to become a full member of the OIC.” The Ambassador reveal that trade is beginning to take shape between the two countries, transportation is a major factor in not being able to sell Guyanese rice to Iran. The cost of transportation has made it unfeasible, however the Iranians have been purchasing Guyanese jewellery for their markets according to the Washington based Ambassador. “Politically, relations are good. Iran has never attempted to enforce its religious ideas on us. Iran has given also given us much support on debt relief issues at the UN and in the OIC as well. Ambassador Ishmael continues, “We have also received strong support regarding our territorial integrity from Iran.” Finally the Ambassador Ishmael revealed, “Iran also is very supportive at the UN of the proposal for a New Global Human Order and was a co-sponsor of the UN resolution on the NGHO.”

Dr. Cheddi Jagan and Iranian Foreign Minister, Mr. Ali Akbar Velayati held a bilateral meeting in Colombia on 18th of October 1995 during the Non- Aligned Summit. Jagan said, “The Islamic Republic of Iran has made significant gains in many areas and we are interested in having close cooperation with Iran at international forums.” (Iranian News Agency). Dr. Jagan extended an invitation to the Iranian Foreign Minister to visit Georgetown.

In July of 1997, special envoy and Deputy Minister of Foreign Affairs of Iran, Mr. Mahmood Vaezi visited Guyana. In meeting with the Guyanese President, Samuel Hinds, Mr. Vaezi handed him a written message from Iran’s President Mr. Akbar Hashemi-Rafsanjani inviting him to take part in the OIC Summit in Tehran in December 1997. The envoy expressed Iran’s willingness to expand relations between the two countries. Guyana in December of 1997 attended the OIC Heads of Government Summit in Tehran and in July of 2000 an Iranian trade fair and exhibition was held in Georgetown, the capital of Guyana. The exhibition was meant to acquaint Guyanese with Iranian goods, while the Iranians examined local items for export, and it was intended to encourage Iranian-Guyanese joint ventures. 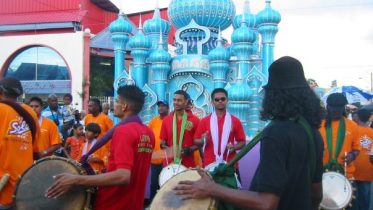 On the auspicious occasion of Meelad Un Nabi