For many years before 1949, various social and  cultural bodies; both Muslim and Hindu made petitions to the Government through the Education Department for Education Grants to non-Christian denominations; but it was only after the arrival of the late Maulana Nazir Ahmad Simab, B.A. F.M. H.P. H.U. in Trinidad from India, that the petitions became more persistent and organised.

Simab, a qualified Muslim missionary, with twenty-two years of teaching experience, demanded that the non-Christian community of this country be given equal rights as Christians in all matters pertaining to Education Grants.

Early after his arrival here on November 12th, 1935, the Maulana organised religious classes in Islam in several areas of Trinidad, and he became the first Muslim missionary to deliver different sermons on each of the Friday congregational prayers. Also, he prepared sermons printed in English, Arabic and Urdu and distributed them free of charge to numerous groups and persons in Trinidad.

At that time the Maulana’s aim was the propagation of Islam through a joint religious and secular programme. He learned that it was the policy of the Government to give some form of assistance to schools that were privately run, and which should satisfy certain requirements laid down by the Education Department.

To qualify for such assistance, the Maulana established a private elementary school at Bissessar Street, El Socorro, San Juan and this was run by Mr. Henry, a retired school principal, who was assisted by a dedicated staff. The administration and financing of this school were carried out by the Maulana, assisted by the following Committee which he had organised:

Later, the Asst. Director of Education the late Capt. E.W. Daniel gave sympathetic consideration to the appeals and claims of the Maulana for Educational Grants. The Private Islamia School at El Socorro continued to be maintained with the profits accruing from a draper’s shop which the Maulana had established at the corner of the Eastern Main Road and Lopinot Road Arouca and also from income gained through the plying of a second-hand taxi-car owned by the Maulana. Further assistance was obtained from the Executive of the Tabligh-ul-Islam organisation, a newly formed body. The executive members of this organisation were:-

Our beloved teacher and leader will be remembered for his piety, his learning and his humility; for his struggle in this foreign cou~ltry for Islam; and for his courage in getting the Education Department to delete from Captain Daniels’ History Books the following:- “Islam was spread at the point of the sword”, and “its teachings were borrowed from the Jews”.

The chief goal of the Maulana Sahib was not achieved by him during his life time;,but he had laid a foundation and left an indelible impression on the hearts of his co-workers who, at his death, gathered together at a mass meeting to which representatives of all districts were present, to pay homage and respect to their very dear and honoured leader.

At that meeting a resolution was unanimously adopted that the work begun by the Maulana Sahib should not cease but be pursued with greater determination. The President of the T.I.A., the late Abdul Ghany, took charge and continued the work of the Maulana with the support of a very strong band of workers.

The ravages of World War I1 made transportation very difficult in Trinidad as spare parts – for vehicles, gasoline and tyres were not available. Tyres were released by the Control Board only under very special circumstances, so collecting of funds on a house-to-house basis was almost impossible. However, a few ardent members, especially Noor Ghany, Siddique Mustapha, Abdul Ghany, Rajab Ali and S. Damree went on Sunday visits to every village and hamlet to solicit funds to run the El Socorro Private Islamia School.

The T.I.A. members urged that they should not be content with working towards the achievement of a special grant-in-aid for a Muslim religious school as such, but that they should struggle to persuade Government to pass legislation guaranteeing non-Christians the same rights as Christians for Education Grants.

At one time in our struggle, Captain E.W. Daniel had proposed that he would make representations to Government on our behalf for a special grant, on condition that the Muslims’ should run the Private Islamia School for two years, along the lines of the existing education system, with the teaching of Islamic Cathecism during the religious education period, and the creation of a Muslim atmosphere in the school.

Mr. N.M. Ghany was unanimously elected honorary secretary of the association. He was commissioned to negotiate with Government through the Education Department to get state aid for our school. Great efforts  were then made to bring the Muslims of the country and other non-Christian denominations on par with the Christian denominations.

The late Moulvi Ameer Ali, who in the early forties had been nominated by Government to be a member of the Education Board and who had struggled for Educational Grant-in-aid to non-Christian denominations, tabled a motion requesting a definition of the regulations which dealt with all matters pertaining to Education in the country, with particular reference to Education Grant for “denominational matters”. The reply was that the regulations referred only to the Christian deonominational bodies.

After careful consideration, the members of our association felt that Captain Daniel’s proposals were  not broad enough and too limited in scope, so this line was not pursued.

At this stage of the struggle, Mr. S.J. Hogben, a man who had lived in Muslim countries, and who knew the Arabic language and what Islam means, became the Director of Education. He at once supported the claims of the Muslims in the request for State aid to non-Christian bodies for Educational purposes.

Later discussions with Mr. S.J. Hogben by the T.I.A.resulted in the agreement that T.I.A. apply for Educational Grants for non-Christian denominations in Trinidad and Tobago.

The Board of Education at one of its meetings supported our application and immediately appealed to  Government to have legislation passed to the effect that non-Christian denominations be eligible for Educational Grants.

For five years, 1944-1949 the struggle for this facility – Education Grants to non-Christians – continued persistently and relentlessly by the T.I.A., till on Monday March 3rd 1949 the first State-aided, non-Christian denominational elementary school was established and opened. The formal opening took place on September 1st, 1949 by the Acting Governor Hon. P.M. Renison, and so began the T.I.A. Islamia Schools programme, the first being El Socorro T.I.A., Islamia, with the following staff on the first day:-

Mr. Nabab Ali, the first T.I.A. principal, has made significant and meaningful contributions to the uplift of the T.I.A., and he is still with us.

After the opening of our El Socorro T.I.A. School in 1949, Mr. S. Moreland Hopkins, who then filled the post of Director of Education, permitted the T.I.A. to establish other schools.

The T.I.A., the pioneers and champions of the non-Christians in the field of Education in Trinidad and Tobago, runs five schools, as mentioned before, with a staff of seventy five teachers and about three thousand students on roll.

The struggles and success of the T.I.A. in obtaining legislation on behalf of all non-Christian bodies for Educational Grants, resulted in the rapid establishment of many more elementary schools, both Muslim and Hindu. For this we are indeed very happy.

The establishment of more schools was accelerated by an encouraging declaration of the then Minister of Education, the Hon. Roy A. Joseph, who said that the non – Christian denominations may open elementary schools if even they had to be in sheds. He saw that there was a pressing need for elementary school places and for elementary education for our children, hundreds of whom had no school to attend. This declaration of the Minister resulted in the establishment of more elementary schools by our sister bodies viz: The Sanatan Dharma Maha Sabha, The Anjuman Sunnat-ul-Jamaat Association, The Arya Pratinidhi Sabha, The Trinidad Muslim League as well as the T.I.A.

The T.I.A. today has its centre and strongest following at El Socorro, San Juan, with branches at Charlieville, Bamboo Grove (Valsayn) Warren (Cunupia) Monroe Rd., (Bejucal) Freeport and Lengua (Princes Town). The T.I.A. continued to broaden its activities. We were able, with the assistance of the Government to employ three fully qualified religious teachers from India versed in Islamiat (Islamic Cathechism). These teachers are namely;

They carry on regular classes in Islam and lslamic Cathecism and lead the Friday prayers at the places mentioned.  As a result, hundreds of Muslim children are given free education in the religion of Islam and also in the Urdu and Arabic languages.

The T.I.A. did not limit its activities to its religious and secular educational programmes but also embarked on a Mosque building programme establishing Mosques at Charlieville, Freeport, Bamboo Village, and Lengua – Princes Town.

Special reference must be made in the History of the T.I.A.. to the Honourable Kamaluddin Mohammed and his brother, the Honourable Sham Mohammed who were particularly responsible for rebuilding our Aranguez T.I.A. and El Socorro T.I.A. Schools. And, had it not been for the two honourable brothers mentioned above, it would have been extremely difficult for us to secure missionaries to conduct our Islamic classes.

Religious Education, the basis on which denominational schools are run and the main ingredient in the life of our people, finds its proper place and gets its full share of attention in all our schools. Islam being the perfect way of life and which guides mankind in every aspect of our existence and action, will continue to be propagated in our schools.

The Maulana Sahib did not in his life see his dreams fulfilled but the efforts of his followers who believed in his ideals and particularly his moral code of ethics in his own life have accomplished, with Allah’s help, the Maulana’s dearest wish. May Allah bless him and may he find the best of Allah’s gifts in the Hereafter.

If inadvertently we have omitted the names of any persons, who have contributed to the uplift of the T.I.A. we want to say “May Allah Taala reward you”.

Be the first to comment on "Our T.I.A – Pioneers in Education" 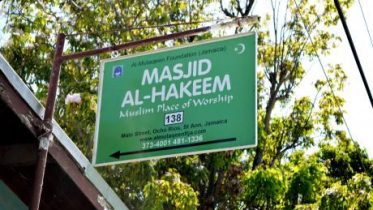 (taken from USINFO.State.Gov website) Dressed in a pale pink-coloured hijab, which formed a covering for her hair and shoulders, 26-year-old Rashida Khan, a postgraduate student…