Muslims arrived in Trinidad on the very first voyage of indentured labourers from India. But the Muslim presence in Trinidad did not begin here. The enslaved African peoples were the first to bring Islam to the Caribbean, although, by the time of emancipation, there was no significant African Muslim presence.

Dr. Nasser Mustapha, lecturer in Sociology in the Department of Behavioural Sciences, UWI, explained that the lasting presence of the religion began with the East Indians. A point of interest, he noted, as revealed by a census taken around 1901, is that “the percentage of Muslims in Trinidad was the same as the percentage of Muslims in certain parts of North India like Uttar Pradesh and Bihar, from where most of the Indians came. So, the Indian population here was a close reflection of the culture of North India.”

“There is a tendency to believe,” Mustapha pointed out, “that in India, all Muslims were the same. But among all Indians there was a marked diversity – in linguistics, culture and religion. Even food was prepared differently. In marriage ceremonies and family life there was also much diversity.”

Of the Muslims who came, the majority were Hanafi Muslims as well as some Shi’ites. The driving force behind the Muslims, and East Indians generally, was the need to preserve. “They came into an alien environment in which they felt threatened. They never felt a sense of belonging. They maintained their ties to the homeland. This is because many of them came with the intention of returning.”

Mustapha also noted that among the early immigrants there was generally a feeling of suspicion towards the culture of the wider society. Another problem they confronted was an imbalance of men and women among the early Muslim community, which resulted in an initial absence of any real family life.

“One way of preserving their identity was to hold on to their religious teachings,” Mustapha explained. Among even the earliest immigrants there were some progressive minds. One of these was Syed Abdul Aziz, a scholar in religion and a pioneer who would later write to the colonial authorities championing the cause of the Muslims. However, Aziz did not confine his work to Muslims alone but was generally regarded as a leader of Indians. “He, among others, began to mobilize people to have classes. I believe the first mosque was built in Iere Village, Princes Town.

“The strength of the early Muslims in Trinidad was the fact that they established mosques, and associated with eh mosque is a jamaat (organization or religious community). So, wherever there was a significant concentration of Muslims they were able to establish jamaats. And there was no opposition really from the colonial authorities because the Indians did their work. The real opposition came when there was a fear of public gatherings, which led to the Hosay Riots.”

“The main force that made inroads into the Indian population was the efforts of the Canadian missionaries. This started towards the end of the 19th century and there was some conversion, particularly in areas where there were no jamaats.”

“Significant attempts to re-establish and revive Islam as they knew it, however, came through the mosque which was not just a religious institution but an educational one. Attached to the mosques were maqtabs or schools for the teaching of Urdu and Arabic and where children could learn about the tenets of Islam.”

“Around this time there was a mutual cultural crossover between Hindus and Muslims because of common pressures and a common external enemy and this manifested in the first Hindu/Muslim School in the 1940s. The East Indian National Association was also formed. Syed Abdul Aziz was a pioneer in this effort.”

With respect to the formal organization of Muslims, the early 20th century saw the formation of the Islamic Guardian Association. In 1926, the TIA was founded. This was the first Muslim organization that was incorporated by an Act of Parliament. 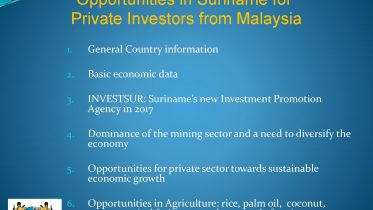 Since taking office in August 2010, Suriname’s new President, Desi Bouterse is set to expand ties with the Islamic world via the forum of the…