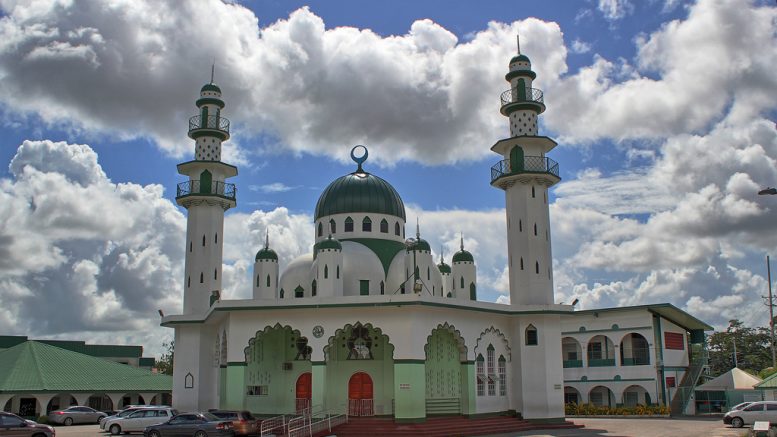 Praise Be to Allah – Laylat al-Qadr [the Night of Power],” proclaims the roadside banner. It bellies in the wind along the dusty, two-lane highway leading north from Guyana’s Timehri International Airport.

A special religious program, “The Voice of Islam,” is playing on the ancient taxi’s radio, and at the nearby Ruimveldt Jamaat Madrasa, two dozen children have just settled down for their afternoon Arabic class. It is the 27th day of Ramadan in Guyana, and at first glance, the music, the mosques and the Muslims all seem strangely out of place in this densely forested, English-speaking nation on the northern shoulder of South America.

But, as local religious leader al-Hajj Naseer Ahmad Khan points out, Islam has long played a prominent role in Guyanese history. “Today, Muslims are integrated into every profession,” he says. “I think we’ve got a good future here.”

Khan, president of the Guyana-based Islamic Missionaries Guild International, is one of nearly 400,000 Muslims scattered across the nations of the Caribbean. Mostly East Indian in origin, they live in relative prosperity on at least a dozen Caribbean islands, including Barbados, Grenada, Dominica, Puerto Rico, the U.S. Virgin Islands and Jamaica.

Travel agents like to promote Trinidad as a tropical Caribbean paradise, an ideal vacation spot throbbing with calypso, carnival and steel bands.

But Trinidad is also the focus of Muslim life in the Caribbean. Last August, Saudi Arabia’s Prince Muhammad ibn Faysal visited to address the 24th international convention of the Islamic Missionaries Guild. The oil-rich island, smaller than Brunei or the state of Delaware, boasts the western hemisphere’s highest concentration of mosques – 85 in all – a Muslim speaker of the house in veteran politician Nizam Mohammed, and even a Muslim president, Noor Mohammed Hassanali.

Last May, both men were featured speakers at Trinidad’s first-ever official public celebration of ‘Id al-Fitr, a joyous event marking the end of the fasting of the month of Ramadan. Nearly 4,000 Muslims turned out for the gathering, which for the first time was held at the national Jean Pierre Cultural Complex in Port-of-Spain.

“The Muslim community in Trinidad, despite being small, is very organized,” said businessman Imtiaz Ali, who attended special ‘Id prayers at the Jinnah Memorial Mosque, one of the country’s largest.

Ali, who from 1974 to 1978 studied at the Islamic University in Medina, Saudi Arabia, today manages the Muslim Credit Union Co-operative Society in Curepe, a small village near Port-of-Spain. In keeping with the laws of Islam, the credit union charges the equivalent of $1 a month in dues, while offering its 1,500 members interest-free loans (See Aramco World , May-June 1987).

In Trinidad, there presently exist two generations of Muslims: one which has become set in tradition, doing things because they were born into it. This group of people doesn’t find Islam very dynamic,” said Ali, who is 32. “And then you have a younger generation of Muslims who do.”

Last year, he said, nearly 100 Trinidadian Muslims – many from this younger generation – made the Hajj, the pilgrimage to Makkah.

Speaker of the House Nizam Mohammed, like Ali and most other Trinidadian Muslims, traces his ancestry to the Indian state of Uttar Pradesh.

“My great-grandparents came as indentured servants around 1845. They were among the first arrivals in Trinidad,” the Port-of-Spain attorney told Aramco World . “To lure them into coming, these people were told that Trinidad offered the best prospects for owning land. Many of them died of frustration and grief.”

The indenture system, used by Trinidad’s British colonial masters shortly after slavery was abolished in 1834, was a form of unpaid servitude which usually required peasants, nearly all of them Hindus or Muslims, to work the sugar plantations for a term of years in order to pay off their debts or repay the often inflated cost of their passage. Inhumane living conditions were often accompanied by efforts to impose Christianity on the newcomers, regardless of their religious beliefs.

“Because of the hardships these people faced in their early days and throughout their lives,” Nizam Mohammed said, “they never left any historical information behind. Today, many of us have no idea of our heritage in India.”

Mohammed, who is 46 years old and London-educated, has no way of knowing whether his great-grandparents were among the 225 passengers aboard the Fatel Razeck, which brought the first indentured servants to Trinidad on May 31,1845.

But he does know about his two grandfathers, Kallam Meah and Rajeem Meah. After serving their five-year terms of indenture – a status just one step above slavery – Kallam went into coffee and coconut farming, and Rajeem became a tailor. In later years, before the advent of the petroleum industry, Trinidad would owe much of its economic success to these early Muslim farmers and merchants.

“Muslims today are very prominent in the business community,” said Mohammed. “Many of them have made their way to the top and hold senior positions in the public service. They’ve always been involved in politics as well.”

Interestingly, Trinidad’s first Muslims were not East Indians at all, but black slaves from the Mandingo tribe of West Africa, many of whose members embraced Islam in the 1740’s. Today, however, East Indian Muslims outnumber their African co-religionists 20 to one.

According to Omar Hasan Kasule’s report, Muslims in Trinidad and Tobago, slaves were first brought to work Trinidad’s sugar plantations around 1777, and by 1802 they numbered nearly 20,000.

“In the 1830s, a community of Mandingo Muslims who had been captured from Senegal lived in Port-of-Spain,” Kasule wrote. “They were literate in Arabic and organized themselves under a forceful leader named Muhammad Beth, who had purchased his freedom from slavery. They kept their Islamic identity and always yearned to go back to Africa.”

But, unlike the Indian arrivals, most black slaves Had no continuing contact with their homeland and could not sustain their Islamic faith.

“Over the last 15 years, we’ve had a number of people from African backgrounds accepting Islam,” said Mohammed. “It is part of the quest for an identity among the African community in Trinidad and Tobago. Many of them have realized that their forefathers were Muslims.”

Together, Indian and African Muslims constitute only eight percent of the country’s total population of 1.2 million, while 36 percent of the people classify themselves as Roman Catholics, 23 percent as Hindus and 13 percent as Protestants. Yet Muslims’ influence in commerce, higher education and the media far outweighs their numbers.

Prime Minister A.N.R. Robinson, head of state of Trinidad and Tobago and party leader of the National Alliance for Reconstruction, alluded to this in his public ‘Id al-Fitr address last May.

“Muslims have made and are continuing to make tremendous contributions to education in our country,” he said. “People of all faiths can derive tremendous benefit from the lessons of Ramadan. All our citizens today can join themselves in the spirit of reconstruction.”

Most Trinidadian Muslims live in and around Port-of-Spain – the nation’s modern, bustling capital city – though there is no such thing as a “Muslim neighborhood” there. Mosques often share the same street with white clapboard Baptist churches and elaborate Hindu temples.

One particularly beautiful masjid is the Jinnah Memorial Mosque in St. Joseph. Built in 1954 and named after Pakistan’s first president, the chocolate-and-cream structure is easily recognized by its two towering minarets. The spacious mosque was once featured on a 50-cent stamp, and can easily accommodate 1,000 worshippers. Other important mosques are located in the towns of Tunapuna, Curepe, San Fernando and Rio Claro.

Several Muslim organizations also flourish in Trinidad, the largest being the Anjuman Sunnat-ul-Jamaat Association, which was founded in the 1930’s and represents some 80 percent of the nation’s Muslims. In addition, the Trinidad Muslim League, the Islamic Trust, the Tabligh Jamaat and the Islamic Missionaries Guild of South America and the Caribbean all have significant followings.

But where Islam has made the greatest difference, argues Brinsley Samaroo, historian and Trinidad and Tobago’s minister of local government, is in strengthening the moral fiber of the nation.

“The major impact of the faith lies in the input that it has undoubtedly made to the value system of Trinidad and Tobago,” wrote Samaroo in the 1987 ‘Id al-Fitr annual. “Its appeal to believers, regardless of their race, has stood out like a beacon to guide a nation in which the ruling classes have always used race as a factor to ensure their dominance.”

Islam is even making its mark on Tobago, the jewel-like sister island of Trinidad, noted for its white-sand beaches, shimmering coral reefs and slow-paced living.

The first Muslim, Rostam Mohammed, came here 50 years ago with his son Yusuf. He kept the religion alive from then to the present,” says Manzoor Ali, a heavy-equipment contractor and one of the few Tobagonian Muslims who has made the pilgrimage to Makkah.

“We have a vibrant community now. We have already converted some African brothers,” reports Ali, adding that the 80-member congregation is currently building a mosque at Lowlands, near the picturesque town of Scarborough.

Despite their shared British colonial past, Trinidad and Guyana today stand at opposite ends of the economic spectrum. Even with the recent drop in world oil prices, Trinidadians still enjoy a per-capita income of $6,010 – fourth highest in the western hemisphere.

Be the first to comment on "Muslims in the Caribbean" 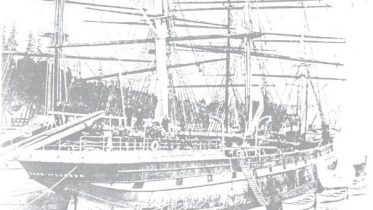