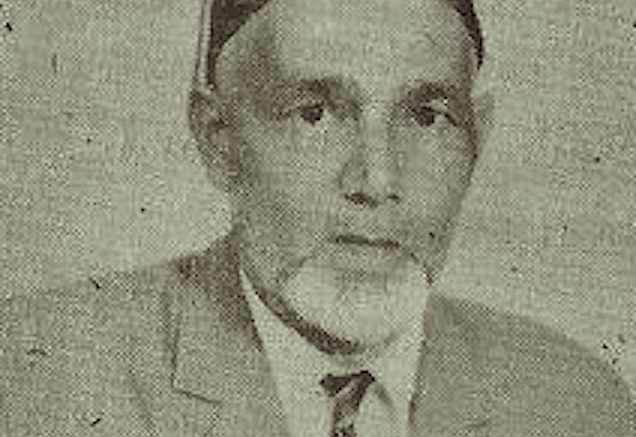 The prophecy of the Holy Prophet Muhammad (ﷺ peace be on him) predicted in world scriptures, is nothing new to Muslims for the Holy Quran declares “And when God made a covenant through the prophets: certainly what I have given you of the Scripture and wisdom then apostle comes you verifying that which is with you, you must believe in him and you must aid him. He (God) said: Do you affirm and accept my compact in this (matter)? They said: We do affirm.” Chapter 3 : verse 81.

The claim is advanced here that the prophets had prophesied advent of a world prophet who should verify the truth of all the prophets who had appeared in the world: and so we End it an article of faith in Islam, that Muslims must believe in all the prophets of the World.

Prophecies of the coming of Muhammad in Old and New Testaments 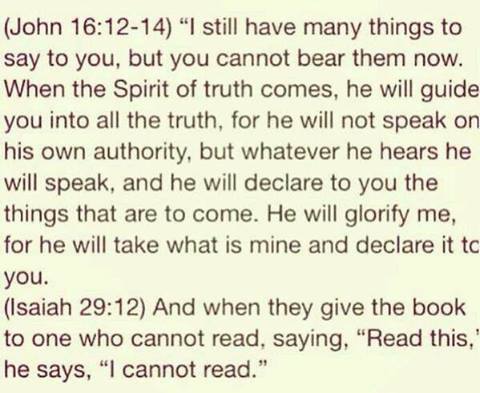 There are many prophecies regarding the Holy Prophet both in the Old and New Testaments Deut. 18: 15-18 speaks very of the rising of a prophet (Who shall be the like of Moses) FROM AMONG THE BRETHREN OF ISRAELITES, i.e. the Ishmaelites or Arabs. Verse 18 says: “I will raise them up a prophet from among their brethren, like unto thee, and I will put my words in his mouth; and he shall speak unto them all that I shall command him.” We do not hesitate to affirm that it is impossible that the phrase “Brethren of Israel” could have any other meaning than that of “Ishmaelites,” and these never had any prophet but Muhammad (peace be on him).

It is admitted both by Jews and Christians that revelations to the Israelite Prophets were not made in the very words as given in the Scriptures, but only their purport, which they afterward delivered in their own language. The Holy Quran, on the contrary, revealed to the Holy Prophet word by word as it now exists, is a living proof which makes the expression “and will put my words in his mouth,” inapplicable to anyone except Prophet Muhammad (peace be on him).

Almighty God declared in the Holy Quran Chapter 53, Verses 3-4, “Nor does he speak out of desire, it is naught but a revelation that, is revealed.” We further find that “there arose not a prophet since in Israel like unto Moses,” Deut. 34: 10. The prophet promised is “like unto Moses.” What is the unhesitating conclusion? He must be from the Ishmaelites.

In the New Testament we read in John 16: 7, “Nevertheless I tell you the truth. It is expedient for you that I go away for if I go not away, the comforter (parakletos) will not come unto you,” and in Verse 13 we read: “However when he (he is a personal pronoun referring to a man, not a ghost) the spirit of truth, is come, he shall guide you into all the truth: for he shall not speak of himself ; but whatever he shall hear, that shall he speak and he shall declare unto you the things that are to come.” We have not the least doubt that the word “Perikalutas” rendered in English as “Comforter” was not the one uttered by Jesus Christ, but it was “Parakletos” meaning “illustrious” or “renowned” answering in every respect to the Arabic word “Ahamad”.  Sir William Muir says that the word “Ahamad” must have been erroneously employed as the translation Perikalutas in some Arabic version of the New Testament and “Parakletos” (illustrious) for “Perikalutas” by some ignorant Monk in Muhammad’s time. (Muir— Life of Mohamet.) 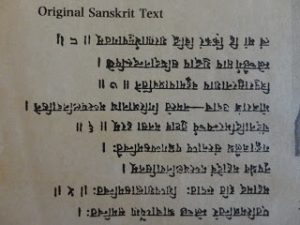 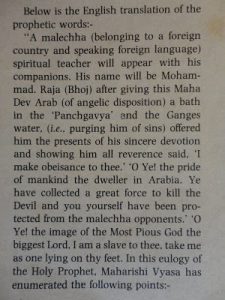 Likewise in the Hindu Scriptures too, there are very many prophecies about the Holy Prophet Muhammad (peace be on him), a few of these are in the Puranas. The one on the Bhavishya Purana is the clearest of all. It gives the name of the Holy Prophet and the name of the country “Marusthalnivasinan”, a denizen of the desert (Arabia). It says, “Just then an illiterate man with the epithet Teacher, Muhammad by name, came along with his companions, Raja (Bhoja in a vision) to that great Deva, the denizen of Arabia, purifying with the Ganges water, and with the five things of a cow offered sandalwood and paid worship to him.

The Parsi religion is one of the oldest religions in the world, perhaps as old, if not older than the Hindu religion. It has two collections of Scriptures —the Dasatir and the Zand Avasta which may be called respectively the Old and New Testaments of the Parsi religion. In Dasatir, No. 14, which is associated with the name of Sasanll, there is not only a corroboration of the Doctrines and the teachings of Islam, but a clear prophecy is made as to the advent of the Holy Prophet. The Prophecy is made in the clearest terms and is preceded by a vision of a state of extreme disorder and demoralization in Persia.

It is as follows: “When the Persians should sink so low in morality a man will be born in Arabia whose followers will upset their throne and everything. The mighty stiff-necked ones of Persia will be overpowered. The house which was built (referring to the Kaba built by Abraham) and in which many idols have been placed will be purged of idols, and people will say their prayers facing it. His followers will capture the towns of Parsis and Taus and Balkh, and other big places round about. People will embroil with one another. The wise men of Persia and others will join his followers.”

The prophecy is contained in a book which has ever been in the hands of the Parses, and its words do not admit of two interpretations. The man who is to come would be an Arab. The Persians would join his faith; fire temples would be destroyed, idols would be removed. People would say their prayers facing towards the Kaba. (Can this prophecy fit in with any person other than the Holy Prophet Muhammad (peace be on him)?

Prophecy of Moses and Jesus in The Quran

Prophecy of Moses (peace be upon him) in the Holy Quran : “Say; O people, surely an apostle of Allah to you all, of Him whose is the kingdom of the Heavens and the earth: He brings to life and causes to die, therefore believe in Allah and His; apostle, the Ummi Prophet (one can neither read nor write) who believes in Allah and His words so follow him, so you may walk in the right path.” Chapter 7 : 158.

Prophecy of Jesus (peace be upon him) in the Holy Quran: “And when Jesus. Son of Mary said: “O Children of Israel; surely I am the apostle of Allah to you, verifying that which is before me of the Torah and giving the good news of an Apostle who will come after me, his name being Ahmad”. But when he came to them with clear proofs they said: “This is a clear magic. ”Chapter 61, Verse 6.

Allah the Almighty says in the Holy Quran: “It is He who has sent, among the people who  had no Scripture an apostle from among themselves who recites to them His communications and purifies them, and teaches them the book and the wisdom, although they were before certainly in clear error.” Chapter 62: Verse 2

Thus, on the one hand, the Holy Prophet Muhammad testified to the truth of all the other Prophets, belonging to all different nations of the world, and made it a part of his religion; on the other hand, the Scriptures of previous Prophets are found to contain clear prophecies about the advent of the Holy Prophet Muhammad: May the Peace and Blessing of God be upon him. 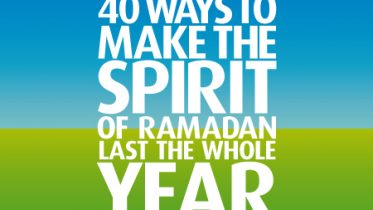