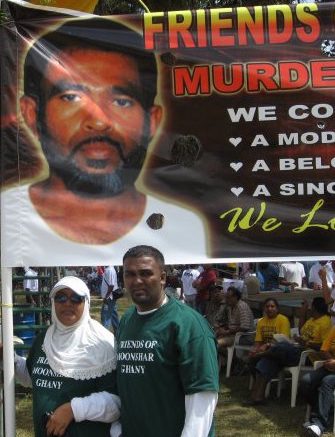 Bandits shot and killed a Muslim community activist in Marabella yesterday and stole an undisclosed sum of money that he was on his way to deposit at a Republic Bank branch for his employer.

Monshar Ghany, 50, of Bonne Aventure Road, Caratal, Gasparillo, was killed in his boss’ Toyota Soluna car after three bandits rail-roaded him at about noon at Battoo Avenue, off Union Road, Marabella.

Ghany remained buckled in the driver’s seat, having recieved a single gunshot wound to the chest. The bandits took four envelopes out of the front passenger seat and sped off.

Ghany, a courier for the past 14 years with the family-owned business of Ali’s Hardware & Metal Fabricators Ltd, of Battoo Avenue, was driving to Republic Bank, Pointe-a-Pierre, to make his regular morning deposit. The murder took place a stone’s throw away from the distribution outlet of the Pepsi Cola Bottling Company Ltd, on Battoo Avenue.

A police report stated that at about 11.45 am, three bandits waited in a silver car in an empty lot near the bottling distribution outlet. As Ghany drove through Battoo Avenue, the sliver car rammed into his car on the driver’s side.

Two men, one armed with a gun, got out of the silver car. One blocked the front passenger door while the other confronted Ghany. The gunman then shot Ghany in the chest. The other man grabbed the envelopes with the money. Both men scampered back into the silver car where the driver was waiting. The bandits then sped off. Passers-by who heard the gunshot raised an alarm. One person, who witnessed the incident, told Newsday he was with a group of friends liming at the corner at the time. The eyewitness ran to Ghany’s assistance; “I know him, he used to take me to mosque and teach me Arabic. I went over and tried to save him. He looked at me. He still had on his seat belt. I told him to hold on since I couldn’t really do anything. He watched me again then dropped his head,” said the eyewitness.

Ghany’s wife, Zaberan, and two children Adam and Raheema, arrived minutes after the shooting. Zaberan, a housewife, said her husband left home for work “normal.” She said, “All I know is that I got a call, and right now my husband is dead.”

Scores of relatives, and curious onlookers gathered on the scene as news spread of Ghany’s death. A relative told Newsday, “Two months ago, Ghany became a grandfather for the first time. He was such a nice man, devoted to his wife, children and new born grandson. He was a devout Muslim and well respected leader in the community.”

Ghany worshipped at the Gasparillo mosque where he was an active member of the jamaat (congregation). Members said he took care of the mosque and was the person who was responsible for organising events during the month of Ramadan.

As Ghany’s body remained in the vehicle, Zaberan, accompanied by an imam, was granted permission by forensic officers and other senior police officers to perform a Dua (a prayer) before the body was removed from behind the steering wheel. Adam and Raheema were also allowed to view the body. Workers at Ali’s Hardware, located about a half mile away, were willing to speak to Newsday about the incident. Ghany’s employer also could not be located.

Be the first to comment on "Moonshar Ghany: Muslim activist murdered" 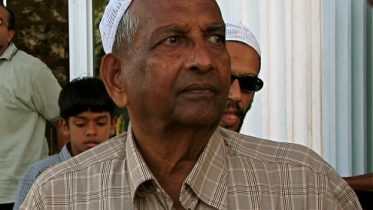