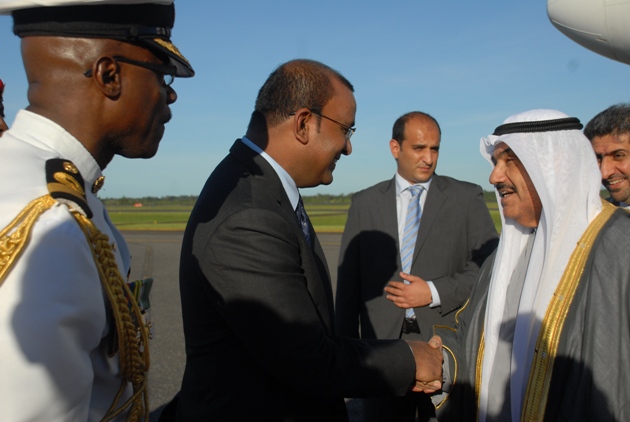 After visiting Antigua and Barbuda, Mexico and Cuba on a 3-week tour of Latin America and the Caribbean,  Kuwaiti Prime Minister, Sheikh Nasser al Mohammed al Ahmad al Jaber al Sabah will  arrived in Guyana on July 19, 2010 for a one-day visit.  The Prime Minister was accompanied by a delegation of more than 50 people including the Ministers of Foreign Affairs, Finance, Commerce and Industry, Senior advisers, the Managing Director of the Kuwaiti Investment Authority, Managing Director of the Kuwaiti Fund for Arab Economic Development among others.

During the brief visit official talks were held between Kuwait and Guyana in which the Prime Minister of Kuwait Sheikh Nasser Al-Mohammad Al-Ahmad Al-Sabah and Guyana’s President Bharrat Jagdeo headed the two sides.The two sides discussed relations between the two countries in the fields of politics, economic, trade, and culture and ways to develop them.    After the talks, agreements were signed between the governments of Kuwait and Guyana on economic and technical cooperation, prevention of double taxation, avoidance of double taxation and tax evasion on income and capital.     The agreements were signed by the Kuwaiti Finance Minister Mustafa Al-Shimali and his Guyanese counterpart Dr. Ashni Singh.

Moreover, the two countries signed an agreement on aviation services which was signed by Kuwait’s General Director of the Directorate General of Civil Aviation Bader Butaiban and Guyana’s Transport, Communication, and Hydraulics Minister Robenson Benn. Guyana’s President held a banquet in the honor of His Highness the Prime Minister and his accompanying delegation. The banquet was attended by senior officials from Guyana

The statement of the President of Kuwait’s Union of Investment Companies (UIC) came during his meeting with the president of Guyana chamber of commerce Ramesh Dookhoo Tuesday evening, as part of the visit of His Highness the Prime Minister of Kuwait Sheikh Nasser Al-Mohammad Al-Sabah to Guyana.

Al-Banwan said that the meeting with the Guyanese was the second, adding that the first meeting was held last January and witnessed the signing of an agreement on protecting and encouraging investment.

The visit comes as part of the efforts of Kuwait Chamber of Commerce and Industry (KCCI) to strengthen trade relations and search for suitable investment opportunities for the private sector, he pointed out.     Challenges require more talks and visits to increase trade exchange and to coordinate holding exhibitions and other activities to present Guyanese products to Kuwaiti traders and consumers, he said.     On his part, Dookhoo said he was looking forward to increasing trade exchange with Kuwait.

By the end of 2010 the government of Guyana, the private sector and the Ministry of Tourism, Industry and Commerce will visit Kuwait. They are currently working on putting together a team to travel to Kuwait, to pursue investments and build relations.

The Kuwaiti Prime Minister’s visit to Guyana is of historic proportion. Sheikh Nasser al Mohammed al Ahmad al Jaber al Sabah became the first Arab head of government to visit Guyana, and from a very important oil producing country in the Arab Gulf.  Kuwait is one of the richest countries in the world that has funded development projects in Guyana, Jamaica, and Antigua and across the world.  Recently, Kuwait announced the opening of embassies in Cuba, Chile and Mexico in an effort to expand economic and social ties with the Latin America and the Caribbean.  Guyana itself is exploring the feasibility of an embassy in Kuwait.  Jamaica, a Caricom member will soon open an embassy in Kuwait.

Guyana/Kuwait ties have grown increasingly since the visit of former Guyanese President, Cheddi Jagan to Kuwait in 1996.  This was followed by several lower level visits from Kuwait.  In January 2010, Guyana’s President Bharrat Jagdeo’s 3rd visit to the Middle East took him to Kuwait. Jagdeo and his delegation were guests of the Kuwaiti Emir and stayed at the Bayan Palace.  Two Memoranda of Understanding (MOU) were signed during the visit to bolster cultural ties and bilateral investments.  Kuwait also appointed an ambassador to Guyana and agreed in principle to loan Guyana 10 million dollars to develop Georgetown’s housing sector.

Jagdeo had extensive discussions with the Emir about the outstanding debt issue. Under its Paris Club agreement, Guyana must seek comparable write-offs from other creditors or jeopardize the existing arrangement.  According to President Jagdeo, Kuwait will fund a four-lane highway from Guyana’s capital city, Georgetown to the airport.

Guyana with sizeable Muslim community has historic ties to the Arab-Islamic world since the 1700s when West African slaves brought Islam to its shore. This relationship grew stronger with the arrival of a second wave of Muslims between 1838-1917 from South Asia.  More recently, Guyana joined the Organization of Islamic Conference (OIC) drawing the two countries even closer. Kuwait has been a major financial backer of various charitable programs in Guyana. 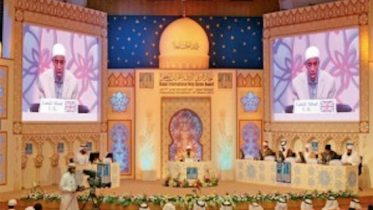