The following is a response to a report which was published by Canadian Press in which an Imam was asked the question: Is it correct to say that “all followers of Allah have been commanded to kill everyone who is not of your faith; so they can have a place in heaven? The Imam replied, “Yes”.

The Arabic word Jihad comes from the root word Jahada which means the following:

He strove, laboured, or toiled; exerted himself or his power or efforts or endeavours or ability, employed himself vigorously, strenuously, laboriously, diligently, studiously, sedulously, earnestly, or with energy; was diligent, or studious; took pains, or extraordinary pains in such a thing. (Lane Arabic/English Lexicon, vol. 2, p. 473)

Coming out of the root word, the word Jihad means the following:

The using, or exerting, one’s utmost power, efforts, endeavours, or ability, in contending with an object of disapprobation; and this is of three kinds: namely, a visible enemy, the devil, and one’s self; all or which are included in the term as used in the Qur’an 20:78 (ibid. “Jihad”).

In the Holy Qur’an Allah says:

And strive in His cause as ye ought to strive, (with sincerity and discipline): He has chosen you, and has imposed no difficulties on you in religion: it is the way of life of your Father Abraham.

No where will you find that the meaning of Jihad is to go out and kill a person just because he has not accepted Islam. A Muslim is commanded to fight if he is attacked, or in order to prevent oppression, etc. In this connection Allah says:

Fight in the cause of Allah those who fight you, but do not transgress limits, for Allah does not love the transgressors. (2:190)

Even when one is attacked and has the power to retaliate aggressively, Allah enjoins upon believers to use their discretion. For example He says:

And if you have to retaliate, do not retaliate worse than what they did to you, but if you show patience, that is indeed the best (course) for those who show patience. (16:126)

Islam does not uphold the principle of turning the other cheek; as a result a Muslim has the right to defend himself when attacked, but that does not give him the right to punish anyone for not accepting Islam, except if it is in an enemy country (i.e. those who attacked Islam) and in the process of repelling the attack the enemy is overpowered, then the Muslims can use their discretion in prescribing punishment to the attackers.

When asked by his companions: Prophet Muhammad ﷺ (peace be upon him -pbuh) demonstrated the best meaning of Jihad when, after returning from one of the battles, he is reported to have said: “Now we are leaving the small Jihad and returning to the greater Jihad. What is the greater Jihad, O Messenger of Allah? He replied; The Jihad against the Nafs; i.e. to control oneself from doing evil. “

It is unfortunate that people associate Jihad with killing. Even in bringing the Message of Islam, the persons who are inviting others do not behave like the people of some other faiths where incentives and conditions are attached to the invitation to be converted. Allah directs Muslims to invite to Islam, not by force, but in the following way. He says:

Invite (all) to the way of thy Lord, with wisdom and beautiful preaching; and argue with them in ways that are best, and most gracious; for thy Lord knows best who have strayed from His Path, and who receive guidance. (16:125)

When Prophet Muhammad (pbuh) captured Makkah, and held all those who made every effort to kill him before he migrated to Madinah; he asked them what shall I do with you? They replied: forgive us: He said: I forgive you as Joseph forgave his brothers.

It is the religious duty of every Muslim (believer in the Oneness of Allah) to convey to the non-believers the Message of Belief in One Creator of the universe and submission to Him only. That is the believers’ Jihad. It is left to the person to accept or not to accept. The preacher cannot use any kind of force or scheme to convert the listener. Allah says:

O Messenger, proclaim the (Message) which hath been sent to thee from thy Lord; if thou didst not, thou wouldst not have fulfilled and proclaimed His Mission. (5:67)

Prophet Muhammad (pbuh) did not spread Islam with the sword, he was the most loving and compassionate person, even among all the Messengers of God who came on earth; and because he is the believer role-model, all believers are supposed to relate with every human on the basis of love, and nothing else. 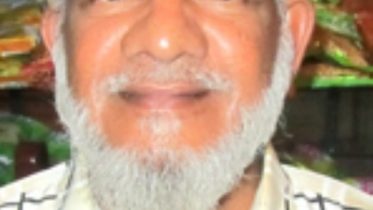 Kaiteur News of Guyana designated Mustapha Ali as a “Special Person”.  Access original posted article here.   It takes a lot out of a person…