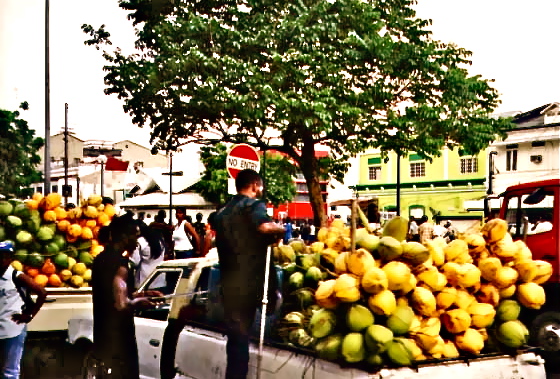 Jalal Bacchus claims he was the first man to sell coconuts around the Queen’s Park Savannah. He sold under the samaan tree near Stollmeyer’s Castle.  In those days, he says, there was no highway and, living in Curepe, he rode his horse-cart into Port of Spain.

Stollmeyer’s Castle. This Scottish styled castle was built by Charles Fourier Stollmeyer in 1904.

He has lived in a tapia house with a needle grass roof; he has seen the advent in Trinidad of planes, trains and automobiles. Before now, however, Bacchus says that he has had very little reason to own or use most of these modern conveniences. Last Wednesday, when receiving two tickets courtesy Air Caribbean to Tobago, Bacchus explained that he had never been on an aeroplane quire simply because “I had no cause”.

Bacchus’s hundredth birthday was a big enough cause though for members of the Curepe Local Village Council, headed by Shah Hosein, to seek the patronage of several companies to enable Bacchus to have the experience of flying and for members of his small community to come out on Sunday morning to celebrate his birthday with him.

Hosein explained at the ticket-giving ceremony that the response was greater from the smaller companies; the village council was able to raise a little over $2,000 towards Sunday’s birthday get-together and Singh’s Auto Rentals has paid for both Bacchus and Hosein to stay at the Grafton Beach Hotel in Tobago for three days.

Coconut vending by the Savannah

Bacchus, born in Central Trinidad, is the son of two East Indian immigrants. His father’s untimely death left him the eldest of three children at age four. He began working in the sugar estates at age six. He worked then for ten cents a day. In 1903, ten cents could buy four pounds of flour or ten-penny loaves of bread.  Bacchus remembers having to get to work for seven o’clock, under the threat of being sent back home. He drove the plough mule, weeded, cutlassed and cut cane, his wage raising to an all-time high of 40 cents a day.

In Bacchus’s long life he has been married three times. His first marriage only lasted a month. He lost his second wife to pneumonia after only three years of marriage. His last was the mother of his only biological son.  When his son drowned at the age of 21, his third wife died soon after. His son had married at 19 and his wife bore him a son and a daughter before his death.

Bacchus’s third wife had two other children from a previous marriage and he adopted them as his own. His grandchildren are still alive and have given him four great grandchildren. His stepson died recently at the age of 64, leaving two children in Mayaro. And so the legacy continues.  Most people never get the opportunity to live in one place as long as Bacchus, who has lived in Eccles Trace, Curepe, for almost 60 years.

Asked what life has really been like, Bacchus said with a smile “Life was very nice, very sweet, better than now.” Bacchus, who was lying on his bed listening to the 12 o’clock news when the Express visited him on Friday, explained that “Now is a bad way of living.” He said that before one would never hear about five-year-olds and eight-year-olds getting raped and killed.

He got visibly upset and sounded a warning to any man thinking of doing that to one of his grandchildren: “As old as I am, I will pass you out or you will pass me out; I would take the gallows for you,” he ended.

Living to the age of 100 in these times is no easy feat and can only be done by the grace of Allah (Bacchus is Muslim).  Sunday morning’s event was a thanksgiving for Bacchus’s life.  About 50 family members, friends and well wishers gathered under a tent at the side of Bacchus’s small wooden house, offering thanks and praises to Allah. The main message was that gratitude was the most important of virtues.  The food was prepared by members of the community.  Jalal Bacchus and Shah Hosein left for Tobago at 9 a.m., Monday. 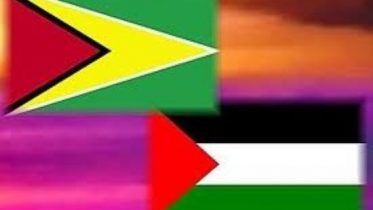 Guyana, a member of the United Nations Committee on the Exercise of the Inalienable Rights of the Palestinian people since 1975, yesterday became the first…