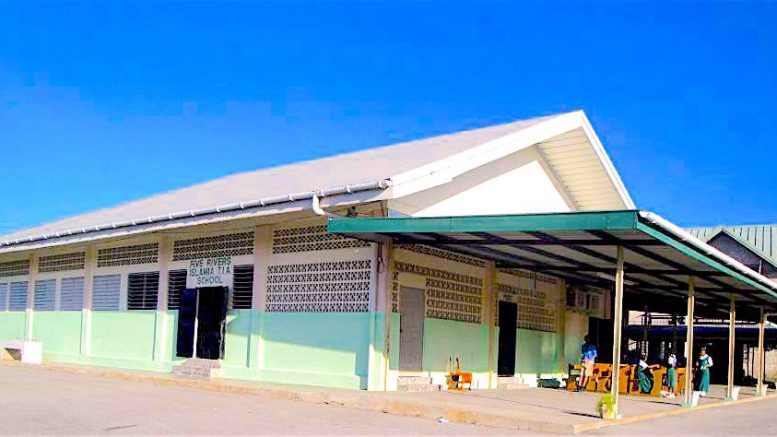 History will chronicle the unique pioneer work of the T.I.A.; its achievement in the Education field and its .. leadership among the non-Christian denominations in the school-building and education programme in Trinidad and Tobago.

Some years before 1953, the T.I.A. pioneers saw the feasibility of establishing an elementary school in Arouca and they negotiated the donation of one-and-a-quarter-acre plot of land from the then proprietor of Five River, Estate – the late C.A. Milne Home for the purpose.

Government grant, earmarked for the construction of Aranguez T.I.A. School, was transferred for building the Five Rivers T.I.A. School. With the warm and staunch support of all the villagers, T.I.A. embarked on construction of the first non-Christian denominational school-building in the country. Naturally, this was a novelty in the land, and every one watched its progress under the constant supervision of the late Sheikh Hashim Muzaffar, and Mr. N.M. Ghany. The realization of the building was a landmark in the educational history of our country.

Five Rivers T.I.A. School opened its doors on Monday April 13, 1953 to 165 pupils and ten teachers on the first day. There were Muslims, Hindus and Christians. The staff then comprised the following:

Today our students are 25% Muslims, 60% Hindus and the rest Christians, drawn from Arouca, Five Rivers, Cane Farm, Kandahar and Tacarigua.

Our school building, office and washrooms are large, spacious, airy and reasonably adequate, although shortage of water pressure often puts our toilets at grave disadvantage. The yards are a good expanse where pupils could move about freely and happily.

A third of our pupils come from depressed areas with very poor roads, no water supply, homes of low incomes and very poor, stony soil which does not lend itself to profitable home-gardening. These factors militate against a settled community, for people who come to settle (often 20%), move away to seek better living, thus taking our pupils along. This goes on continually.  Inspite of the social setbacks, it is encouraging to note that our school problems are not more magnified, and that our examinations results are good.

Besides the normal academic work of the school, our religious instruction and moral training of pupils receive very special attention in all sections of the school. We have always taken part in competitions of arts festival, sports, recitation, art, essay writings, local examinations and school gardening. Religious festival programmes, recognising the various religions of our pupils, the Junior Red Cross, Junior Co-operatives, and school journeys have contributed to the general all-round development of our students resulting in a special kind of social growth, and in friendly understanding among our multi-religious, multi-racial school population.

Our ex-pupils could be found in every walk of life; in the Building trade, Agriculture, Teaching Service, Civil Service, the Defence Force, Manual Labour, and a few of our boys and girls are at universities at home and abroad.

Recently the school was given a very general renovation to the value of eight thousand dollars. Special recognition must go to the Vice Principal – Mr. Omar Mohammed, for the great achievement accomplished with the help of the staff, pupils and donors. Parents were most patient and understanding when the academic work of their children was interrupted, or when, they went home soiled from assisting in the renovations. We also thank the contractors for good work and fair charges.

On this our twenty-fifth anniversary of the T.I.A. in the establishment of schools, we wish to record our gratitude to all individuals and firms that have in any way helped to stabilise the Five Rivers T.I.A. School. We here remember with love, those pioneers of T.I.A.; who gave blood, sweat, tears and hard cash over the past 40 odd years in the stmggle to place Islam Where it stands today. We pray that AUah should bless those who have passed away, and give His strength and courage to those at the helm today, to continue in the noble field of work, started by our Holy Prophet Muhammad ﷺ. 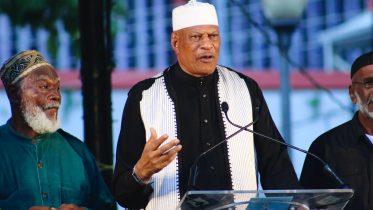 As published by New York Times here ENTERPRISE, Trinidad and Tobago — By the time he was 17, Fahyim Sabur had memorized the Quran. At…