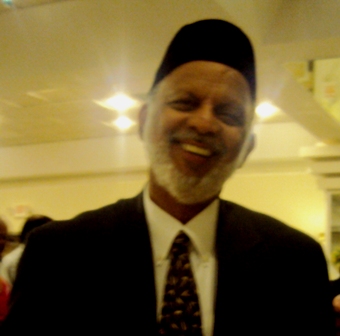 Hassan and Nazmoon Khan and the eldest of twelve children, was reared in a family known for its involvement in Islamic propagation. His great grandfather the late Moulvi Chand Khan was known to be the first person to have built a mosque in the colony of British Guiana. Faizul Khan was the grandson of the late Meer Khan. He was tutored in his early years at the hands of early Islamic scholars like Moulvie B.H Chand and Moulvie Naser Ahmed Khan. At an early age of seventeen years, Faizul R. Khan established a Madrasa to teach voluntary the principles of Islam and recitation of Quran. This continued in his later years for over fifteen years.

In his school days he was President of St. John’s Bosco Boys Club and captain of the Carmen Roman Catholic School Volleyball and Cricket teams. In 1961 he established the Albouystown Islamic Society to promote Islam. It later grew into a national movement and the name changed to Muslim Youth League. There were branches in each of the counties of British Guiana and attracted many young people. It later became more nationally recognized when they won the Partick Dargan Debating Shield in 1966. The first Muslim organization to win such an award.

He held the position of Chairman since its inception until he migrated. His involvement in youth work got him elected as Secretary of the Guyana Assembly of youth, a position he held for ten years (1963-1973), and which allowed him to do extensive travel in and out of Guyana. For also five years he was Secretary of Guyana United Youth Society (GUYS) a political youth group.

Brother Faizul Khan also served as a Trustee of the Guyana Assembly of Youth and an Executive member of the Muslim Youth Organization. For several years he was a volunteer to the Guyana United Sadr Islamic Organization. In his early years he worked at Wieting and Richter and the Demerara Mutual Life Insurance Company before migrating to the USA. In 1973 after being settled in the USA he established a branch of the Muslim Youth League in Maryland, then changed to the Caribbean Muslims Association. After having gone through several changes the organization is now register as the Islamic Society of Washington Area to which Brother Faizul Khan has been involved since its inception and serves as its Chairman. His visible presence and hard work to help advance the cause of Muslims and Islam helped him to be involved in several national Islamic organizations. Among them are the Islamic Center of Washington, DC where he served as a volunteer for over 15 years, Chairman of the Muslim Committee for International Refugees for 15 years, Present Secretary of the Coordinating Council of Muslim organization in the Washington

Metropolitan Area. Past Director of the Inter-Faith Conference of Washington DC, Present North American Representative of the Caribbean Secretariat, past Executive member of Islamic Society of North America (ISNA) and present member of the Shura Council. He was Imam of the Muslim Community Center in Silver Spring, Maryland, Principal of the Islamic Academy of MCC a full time Islamic school, Past Editor of Voice of Islam and presently publishes Family Ties Newsletter. Faizul Khan also served as the Administrator,I and Assistant Director of Rabita (Muslim World League) in New York for two and half years. Presently he has a program with brothers and sisters that are incarcerated and send them books etc., on Islam.

Brother Faizul Khan has received nine awards from various, organizations and was recipient of the Medal of Service Award from the Government of Guyana. He has a Bachelor of Science degree in Social Work and has various Islamic certification. He has written several articles on Islam and is regular speaker at Friday Jumah and other Islamic occasions. His publication, “Muhammed, His life and Character”was released. Brother Faizul is a notary public and a Legal Marriage Officer for Maryland, Virginia, and the District of Columbia, and also a certified Islamic Counsellor.

Brother Faizul Khan is married to Sister Maimun N. Khan for 41 years and have two children, both married and four grandson.

This is a picture of Mohammed Ishmael Khan, one of Moulvi Chand’s sons.  Moulvi Chand built the first mosque in then British Guiana (now Guyana).

4 Comments on "Faizul Rahaman Khan – A life time of service" 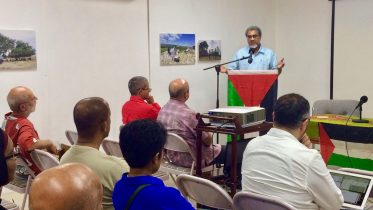