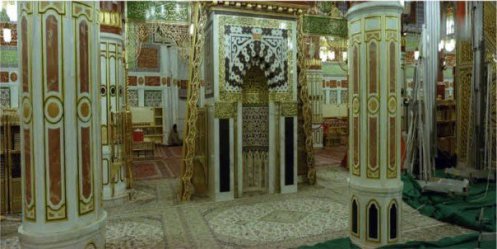 The Christians believe that Prophet Jesus (as) was the ‘son of God’ and part of their creed concerning Jesus (as) is the ‘Harrowing of Hell’, which states that Jesus (as) descended into hell.

Islam on the other hand gives us such a beautiful concept of Prophet Muhammad (ﷺ peace and blessings on him).  Muslims do not associate any divinity to the Prophet, instead we adhere to what Allah says in Surah Kahf “Say: I am but a man like yourselves”.

We should never forget one important thing about Prophet Muhammad and that is he is extremely special, even though he was a humble human being.  Those who aspire to get close to him, they too are special.

Since the Prophet came back from the Miraj; from then onwards, he brought back a piece of Paradise with him.  Proof of this can be found in the hadith narrated by Abu Hurayrah (ra) in which he heard the Prophet Muhammad say:

Allah has been really favourable to the Believers.  What exactly is the benefit of the Rawdah in Masjid al-Nabawi?  Those who were blessed to have been there would tell you the feeling they experienced.  It is a feeling of total peace and tranquility.

Imagine that you are sitting in the Rawdah which is part of Paradise and on your left is your leader and role model.  If you can get so near to him in this world what about the hereafter?

Allah has provided us with an opportunity to rehearse what will happen to the true believers in the hereafter.  He shows us that in reality there is a place called Jannah.  True, you cannot access the facilities of Paradise in the Rawdah of the Prophet (peace be on him), but you can get that feeling of peace and tranquility.  If you are there and Prophet is to the left of you and his body is one that will never decay and Allah reunites his soul and his body in order for him to respond to the daroods’ being sent, what kind of feeling will you get?  Imagine you are actually in the presence of the Habibullah .

If we can build a relationship here in this world and be in his company in this life what will happen in the next.  Allah says in Qur’an “take note that amongst you is the Mesenger of Allah.” No other Messenger was given this blessing and no where else in this universe you will find a piece of Jannah.  That is why it is truly a blessing to visit Madinah.

Establish and build a connection with your leader and insha Allah you will be amongst those who will be considered ‘special’.  And one of the many benefits to be derived is that on the Day of Judgement when everyone will be worried and concerned about the state of their affairs the Chief Intercessor will be looking for you.  You won’t have to look for him because you have already established a relationship with him.  We beg Allah to forgive us and guide us.
SHARE TWEET PIN SHARE 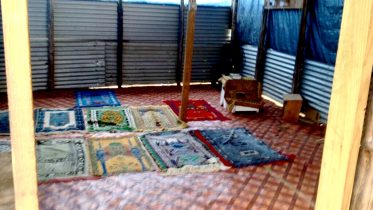 A temporary structure used by Dominican Carib Muslims as a masjid (a place of prayer) was blown away by Hurricane Maria.  The indigenous Carib people,…