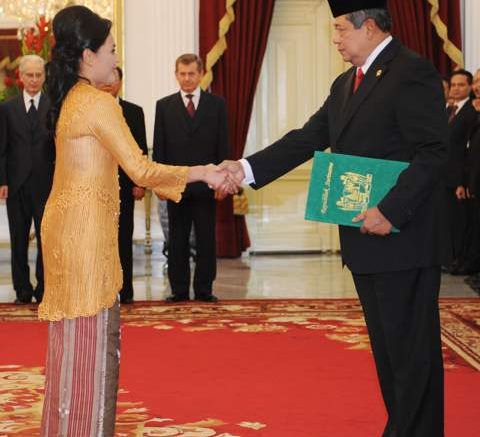 Suriname’s Ambassador to Indonesia, Titi Amina Pardi on Wednesday presented her credentials to the President of Indonesia, Susilo Bambang Yudhoyono, who called for stonger ties between the two countries, especially in the area of commerce and trade.

Amina Pardi is the wife of Salaam Somohardjo, Chairman of Pertjajah Luhur, an Indonesian based political party in Suriname that is part of the coalition government of President Desi Bouterse.

A Muslim Indonesian herself, and former Suriname Ambassador to the Netherlands, who is too familiar with Indonesian traditions, Pardi in presenting her credentials to the President Bambang, was  stylish in her wear, yet showing respect to the world largest Muslim country.  Pardi was conservatively dressed fitting to the values and traditions of Indonesia especially during this month of Ramadhan in an Indonesian two- piece suit concealing most of her body.

“The head of state of Indonesia and Suriname is particularly interested in the cultural field but will also strengthen the economic relationship,” said Pardi in conversation with Star News.  In a brief meeting with the Surinamese envoy, President Susilo Bambang Yudhoyono promised to work closely with Suriname.

He asked the ambassador to not only work closely with the Ministry of Foreign Affairs but also other relevant bodies in Indonesia.  The Indonesian leader highlighted the historic ties between both countries. He invited Pardi to visit various parts of Indonesia to familiarize herself more with Surinamese people of Javanese descent. Many Surinamese have their roots in central and eastern Java.

Ambassador Pardi says that it is a special moment. “The president is sincerely and genuinely interested in Suriname. It is an honor and challenge to represent Suriname, “said Pardi.  The ambassador touched on some key areas of President Bouterse’s foreign policy trust- South-South cooperation, enhancing ties with ASEAN countries, with more than 500 million inhabitants to tap potential markets in Suriname, CARICOM and UNASUR. Indonesia, the world largest Islamic country is a founding member of ASEAN, is now chairman of this organization. “So far we have strong cultural bonds, but Indonesia also has strong industries. We have to enhance commerce and trade that is mutually beneficial, “said Pardi. 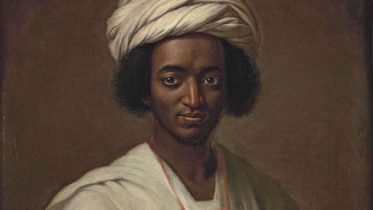