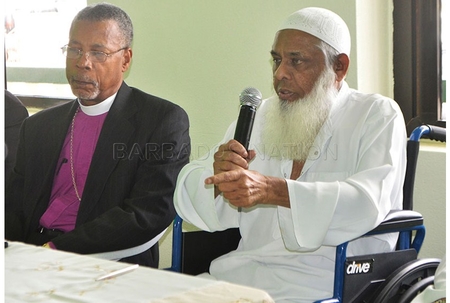 Recently members of the Barbados Muslim community met with several Christian leaders with an aim to bring both faiths closer in communication and co-operation.

Archbishop and Bishop of Barbados, Reverend Dr John Holder expressed to the President of Barbados’ Jumma Mosque, Dr M. S. Nagdee his readiness for both communities to embrace such encounters.

“It seems to me that one of the most important challenges before the religions of the world, is to find some common ground on which we can stand to make this world a better place,” he said.

“At the heart of both Christianity and Islam, is the belief that God wants us to be persons of love, persons who can manifest and share his love in this world. There cannot be any stronger bond than love that can knit us together as human beings.”

Archbishop went on to stress that Barbados is too small of a society to exploit differences for negative purposes. He believes that given the current challenges, communities need to bond together across religions to do what is good, right, helpful and hopeful for the country.

“I think that Islam and Christianity each stand on some very solid ground, and which we can build the kind of fellowship and relationship that can make this country of ours better,” he expressed.

Secretary of the Barbados Muslim Association, Suleiman Bulbulia said he was both pleasantly surprised and overwhelmed by the positive response by the Christian leaders to the invitation to meet at Jumma Masjid, Kensington New Road.

“No one even felt the need to ask the reason why we were inviting you here. For us this speaks volumes as to the respect and consideration among faiths we always felt existed in Barbados.”

As two of the major Abrahamic faiths in the world, Christianity and Islam, Bulbulia further emphasised the need for both faiths to find common ground on issues confronting the society and nation as a whole.

“Our respective faiths share much in common in its moral and social teachings, teachings sadly eroding in our country today,” he stated.

“Global events in recent years have also made it even more vital that our faiths begin the dialogue. As a minority faith we understand the pressures and fears that minority communities face around the world, be it Christian communities in Muslim dominated countries or Muslim communities in Hindu and Buddhist majority nations the media presents many harrowing accounts of oppression of minority groups in several countries.”

“Our community reassures each and every one of you and the congregations that you lead, that as we uphold the tenets of our faith, we do so knowing that our religious beliefs commands to respect the dignity of all human beings and acknowledges the fact that we all came from one father and one mother, Adam and Eve, peace be upon them both,” he said. 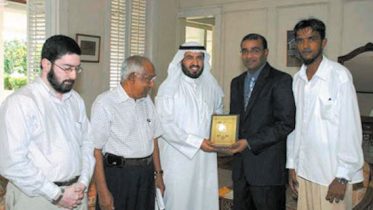