Bridgetown, Barbados: “The Jewish people have a legal and moral right to establish their homeland in Palestine and they have done so.” Dr Peter Laurie, Barbados TODAY, May 21, 2021.

A narrative that gained traction when it was pushed by the Zionists in the late 19th century. And went on to gain acceptance and support from several western nations. This narrative and subsequent approval led the way for the greatest act of injustice on a free people and nation in modern times that has gone on for 73 years. 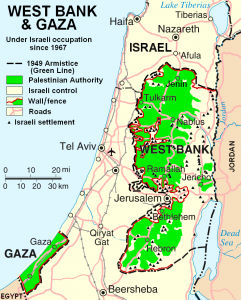 Many orthodox Jews themselves do not support or approve of the Zionist State of Israel. “A legal and moral right to their homeland in Palestine” is tantamount to saying that the First Nations people of the Americas have a legal and moral right to their homeland across North America, Central America, South America and even the Caribbean. And in reality, the First Nations people have a much stronger case than the Zionist do. Palestinians have always lived in that land, whether they are Muslim, Christian, Jew or other.

He puts it best in his writings and speeches about what Israeli society really is. It is a society that has surrounded itself with shields, walls, not only physical walls but mental walls. A society totally disconnected from reality, which is extremely dangerous.

He suggests that there are three principles that enable Israelis to live with this disconnected reality,

And the sad reality is that Israel has been enabled all of these years to behave in such a manner by the greatest amount of aid that it gets from the United States of America. Israel receives $3.3 billion annually in foreign military financing from the US despite the fact that it has a record of human rights abuses and the use of superior weapons to kill and maim innocent men, women and children and destroy property.

The narrative of God’s chosen people and the victim card has been overplayed by the Israelis with the Palestinian side being ignored, denied or not reported. As pointed out in his opinion piece Omar Zahzah writes “In 1984, Palestinian American intellectual and Columbia University Professor Edward Said famously argued that Palestinians are denied “permission to narrate”.

More than 30 years later, in 2020, Maha Nassar, a Palestinian American Associate Professor at the University of Arizona, analysed opinion articles published in two daily newspapers – The New York Times and The Washington Post – and two weekly news magazines – The New Republic and The Nation – over a 50-year period, from 1970 to 2019. Perhaps unsurprisingly, she found that “Editorial boards and columnists seem to have been quite consumed with talking about the Palestinians, often in condescending and even racist ways – yet they somehow did not feel the need to hear much from Palestinians themselves.”

The problem therefore with the narrative is that for over 70 years it has given the Zionist State of Israel the impunity to do as it feels with Palestinian people, their lands, their homes, their livelihoods and everything else they possess.  Gideon Levy is an Israeli journalist and author who writes regularly for the newspaper Haaretz.

But in 2021 that is changing to the disgust of the Israelis and their cohorts. This latest episode in Israeli aggression on the Palestinian people has provoked a response hitherto unseen around the world by people of conscience who have taken to social media to call out what they know as injustice, crimes against humanity and genocide on an occupied people by its occupier.

These past weeks saw thousands take to the streets and to social media to register their protest against Israeli aggression and to stand for Palestine. Here in Barbados, around 100 persons did the same last Friday. We stood for Palestine because enough is enough. 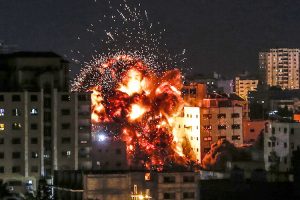 An explosion is pictured among buildings during an Israeli airstrike on Gaza City in 2019. AFP

We also argued that the Barbados Government should in all good conscience recognize the Palestinian people and the right to their land. Over the years Government has touted the two-state solution but has only chosen to recognise one state, the state of Israel. The challenge for them is recognising the state of Palestine. Several countries in CARICOM have already recognised the Palestinian state and were swift in condemning the recent Israeli aggression.

It is interesting to note that the call to recognize Palestine as a state and push for a two-state solution is exactly what Israel wants because the alternative of one state in which all persons have equal rights in the state will disadvantage Israelis. This was borne out recently and perhaps was the reason why Netanyahu chose to engage in another round of aggression.

This piece taken from the Guardian strengthens that conclusion: “Long-serving prime minister Netanyahu was on the brink of losing his post to a nearly formed coalition government, after failing to secure a majority in the fourth general election in two years. The deal being brokered by Yair Lapid, centrist leader of the opposition, would have brought an Arab Israeli party into government for the first time in Israel’s history.”

A two-state solution legitimizes Israel’s illegal occupation and historical seizure of Palestinian lands, its discrimination and slaughter of innocent men, women and children and its wanton destruction of Palestinian property. A one-state solution will expose Israel’s apartheid policies, force them to accept all citizens as equal, Jew, Arab (Christians and Muslims), and give them equal vote which will ultimately mean that the Jews will be in the minority.

Zionism has been and remains the ideology of the state of Israel. And that ideology calls for a Greater Israel at the expense of the lands, homes, livelihoods and lives of the Palestinian people. This is not a religious conflict; this is a human conflict in which one group of people claim superiority over another group of people.

The same happened in apartheid, South Africa. Don’t be fooled by the false narrative that this is Jews against terrorists Muslims. Palestinians are Muslims, Christians and even Jews.  Christian Arabs are equally affected by Israeli aggression as are Palestinian Muslims.

The late Nelson Mandela, who knew too well the horrors of an apartheid state, said it best: “We know too well that our freedom is incomplete without the freedom of the Palestinian people.”

Suleiman Bulbulia is a Justice of the Peace; Secretary of the Barbados Muslim Association; Muslim Chaplain at the U.W.I, Cave Hill Campus and Chair, Barbados Childhood Obesity Prevention Coalition. An earlier version of this op-ed was first published in Barbados Today on May 26, 2021. 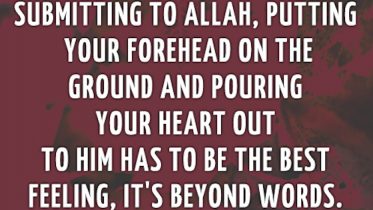 We are coming to the end of another year, and Allah  has selected to leave with us a very important lesson that centres around the…