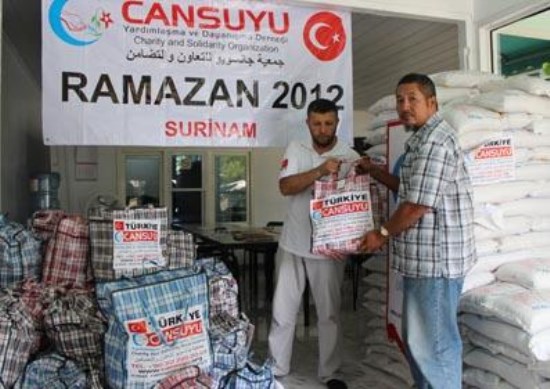 The Suriname Islamic Foundation (SIS) was surprised when it received 300 food packages, each worth SRD 100 from Turkey. The Turkish Islamic Charity Organization, Cansuyu, made its first visit to Suriname during this month of Ramadan according to Raoul Lith of Star News, Suriname.

The Turkish charity has ties with sixty other countries across  the world. Haji Sidik Moertabat of SIS said to Star News that during the fasting month of Ramadan people give much to charity. This gives extra blessing to the work of the generous giver. The food packages will be distributed nationwide to 46 mosques under SIS’s umbrella.

Yunus Emre of Cansuyu explains that it is a non-governmental organization. There are forty permanent employees and more than a thousand volunteers. Emre is a computer expert and a volunteer. This is Emre’s first visit to Suriname, and when he returns to Turkey he wants to educate his countrymen about Suriname.  He hopes to “promote a lasting friendship between the two countries.”

Emre says, “We want these gifts to show the world that Islam is a peaceful religion and not to be associated with extremism. There is a wrong impression in various parts of the world about Islam. We help not only Muslims. In Haiti after the earthquake we brought aid there. In many African countries we are active.”  The Organisation has undertaken sustainable projects in the field of  education and water in several countries.

The needs of Suriname will be further analyze according to Emre.  He was impressed by the country and hopes that a strong bond between Turkey and Suriname develops.

This is the month of Ramadan.  Suriname has a Muslim population of about 20%. Relationship between Suriname and Turkey grew out of people to people ties in the Netherlands where a large Turkish and Surinamese presence exists, and today at the bilateral livel, between the two governments ties have expanded. 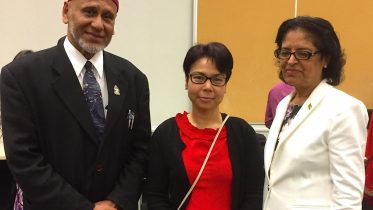 Hajji Omar Farouk, President of The International Muslims Organization of Toronto, a Canadian-Guyanese Muslim, was invited to deliver a message on behalf of the Guyanese…