History and Culture of the Afghans

Pathans were always respected by the Mughals and were heavily patronized by Mughal Emperors in order to pacify them. The Afghans also acted as the buffer zone in the Northwest frontier; they kept invaders out of Mughal India. And in the nineteen and twentieth century they kept the Russians at bay. Without the support of the Pathans the Mughal Empire would not have lasted for as long as it did.

The Pathan, or Puktun, are a race of warriors who live primarily in Afghanistan and Pakistan. They consist of about sixty tribes, each with its own territory. Although their origin is unclear, their legends say that they are the descendants of Afghana, grandson of King Saul. However, most scholars believe that they probably arose from ancient Aryans intermingling with subsequent invaders.

The people of Afghanistan form a mosaic of ethnic and linguistic groups. Pashto (Pashtu) and Dari, a dialect of Persian (Farsi), are Indo-European languages; they are the official languages of the country. More than half of the population speaks Pashto, the language of the Pashtuns, while about half of the population speaks Dari, the language of the Tajiks, Hazaras, Chahar Aimaks, and Kizilbash peoples and other Indo-European languages, spoken by smaller groups, include Western Dardic (Nuristani or Kafiri), Baluchi, and a number of Indic and Pamiri languages spoken principally in isolated valleys in the northeast. Turkic languages, a subfamily of the Altaic languages, are spoken by the Uzbek and Turkmen peoples, the most recent settlers, who are related to peoples from the steppes of Central Asia. The Turkic languages are closely related; within Afghanistan they include Uzbek, Turkmen, and Kyrgyz, the last spoken by a small group in the extreme northeast.

The Afghans who came to Guyana and Suriname were mostly Pathans and a few were Hazaris. The Pathan comes from Afghanistan and the wild west of Pakistan: the Northwest Frontier Province that borders Afghanistan. In his text, Warrior Race, Imran Khan writes, “physically the Pathan has more in common with the people of Central Asia than with those of the subcontinent. The fine, aquiline features, high check-bones and light skin reflect the Pathan’s origins in Afghanistan and Turkey”.9

Pathans from various areas such as South Waziristan, the Mahsuds and North Waziristan the Waziri differ in complexion, hair and eye colour. Some are taller and fairer while some have green and blue eyes. “Many of the tribal elders dye their grey beards red with henna”.10 A practice that some elder Afghans kept in Guyana. Pathans are very competitive and determined; they show no fear. They are honest, dignified, and uncompromising in their promises. Money does not impress a Pathan. “It is the Pathan’s sense of honour that makes him conduct himself with such dignity, and a fiercely independent spirit that makes even the poorest tribesman walk like a king”.11

To understand the Afghans, one has to look carefully at their culture in context of their geographical landscape. Why are they so rebellious and difficult to conquer? Originating from Afghanistan, the Pathans are one of the greatest warrior races on earth; they have never been conquered. For centuries the Pathans have “existed by raiding, robbing and kidnapping”.12 But one has to understand the physical terrain of the Pathans. “In the mountainous terrain, hardly anything grows, and whatever is produced is insufficient to sustain the population of the area”.13 Sometimes it is difficult to sustain the family without raiding and kidnapping from the affluent lowlands to feed the family. “It is not the nature of such a proud race of people to resort to begging”.14 Consequently robbing and kidnapping became a means of survival.

The Pathans are the majority in Afghanistan. The British in 1893 created the Durand Line separating Afghanistan from India and “slicing right through the Pathan’s territory”15 The southern part of Afghanistan is predominantly Pathans. Due to tribal rivalries many Pathan tribes settled along the banks of the Indus, the Waziristan, and the Vale of Swat, Peshawar and between the Sutlej and Beas rivers. “There were Pathan settlements in Northern India in Hoshiarpur, Pathankot, near Lucknow, Rohailkand and many other areas”16 This explains the presence of Afghans among the Indians who went to Guyana as well. Some Pathan tribes are the Yusufzai, Afridi, Niazis, Lodhis, Ghoris, Burkis, Waziri, Mahsud, Marwats and Khattaks.

Pathans believe that they are all descended from a common ancestor, Qais. He is said to have met the Prophet Muhammad. The Prophet gave Qais the name “Pthun, and Qais was to take Islam back to his home. One of Qais’s sons was name Afghana, who had four sons. Every Pathan traces its descent from one of these four sons.

The first of these four Pathan branches is the Sarbani; this includes the largest Pathan tribe, the Yusufzai, which settled in Swat, as well as the Tarkalani, Mohmands and Muhammadzai. The second grouping is the Bitani. The Niazis, Ghilzais, Lodhis, Suris, Marwats, Lohanis, and Nuhranis belong to his group. The third branch is the Karlani, which includes some of the wildest tribes, such as the Mahsud, Waziri, Afridi, Orakzai, Dawar and Bangash. The fourth branch I am researching.

Pathan is a corrupted version for Pukhtun. This word means “backbone, hospitality, bravery and honour.” The culture of the Pathan is based on the latter principles. “Which is enshrined in a code of honour known as Puktunwali, or the way of the Pathans”.17 According to Imran Khan, a Pathan is recognized by other Pathans not so much by racial characteristics as by his adherence to “Pukhtunwali.” If he does not follow the code, he is not a Pathan. The wilder tribes adhere to the code more strictly.

Pushtunwali is followed religiously, and it includes the following practices: melmastia (hospitality and protection to every guest); nanawati (the right of a fugitive to seek refuge, and acceptance of his bona fide offer of peace); badal (the right of blood feuds or revenge); tureh (bravery); sabat (steadfastness); imamdari (righteousness); ‘isteqamat (persistence); ghayrat (defense of property and honour); and mamus (defence of one’s women).

Pukhtunwali is closely linked to the spirit of Islamic justice and rejection of unfairness. It is not a coincidence that Pathans rose up against British injustice on the Sugar Plantations of Guyana. Khan writes, “The criterion by which a man is judged is not the amount of money he has but how honourable he and his family are”.18 A Pathan will go at length to maintain his honour. “Any slight to his honour has to be avenged – there is no question of turning the other check”.19 Revenge is taken only on male members of a family.

The majority of Pathans are Sunni Muslim. Islam came to them as a great liberating and unifying force. For this reason, their underlying faith and steadfast devotion to Islam is very strong. Pathans are staunch believers and would go at length to defend Islam. They practice Islam according to the Qur’an without deviation. No wonder why we see the Afghan play a prominent role in the history of Guyana and Suriname. The building of the Queenstown Masjid was initiated by the Afghans in Guyana, while a leading Afghan immigrant, Munshi Rehman Khan, nurtured his community.

Afghans and the Queenstown Masjid

An Afghan with a typical Afghan name, Gool (Gul) Mohammad Khan, who was an indentured labourer, took the initiative to build the Queenstown Jama Masjid. “The first Imaam of the Masjid was reported to have been Gool Mohammad Khan”. Gool Mohammad Khan after serving his indenturedship returned to India. It is also reported that another Muslim bearing the name Jilani was the first Imaam. “The Jamaat comprised Muslims from India and Afghanistan; the latter apparently arrived in this country via India”20

Gool Mohammad Khan persuaded another Afghan, Goolam-uddin to purchase the plot of land for the building of a Masjid. Mr. Goolam-uddin lived on the property of the Masjid and was the caretaker of the property. This Afghan was reputed to have a “dominant personality and kept a full beard coloured reddish brown with henna”.21 Like most Afghans, Goolam-uddin also had a stern and “forceful nature”. Thus, disputes rose among the Afghan and Indian Muslims and “eventually around 1923-1924 the Indian members decided to leave the MasjidY”22 However, the Afghan control of the Masjid lasted for only a few years because of their small number and remigration to India.

The Pathans are meat lovers. Many were meat handlers in Guyana and some owned businesses in Georgetown. There was always a mince mill in the home of the Pathans to grind meat to make kebabs. They substituted the tandoor over for the local fireside in Guyana to cook their kebabs. The famous firni (rice pudding) for dessert was served on all auspicious occasions. Some Muslims call it Sirni and cooked it differently from the Pathans. The diet of the Pathan Afghan Guyanese was quite different from that of the Indian Muslims but eventually the authentic cuisine of the Afghans died as the few remaining Afghans interbred with non Afghan Muslims. Never could I forget Begum Bibi Hannifa Khan Hussein from my town. She had strong Afghan roots. Her family’s physical features, culture and diet stood out amongst their Muslim brethren in the community. She always had an entourage of people cooking at her home. Lavish meat dishes and Afghan bread was prepared. Meat was always ground for kofta kebab. During her lifetime she hardly set foot on the grounds of the plantation that her husband Ishaq Hussein managed for Amin and Ahmad Sankar. From a distance she gave orders to the men with her resounding voice, while maintaining the tradition of purdah.

The clothing of the Afghan Guyanese Muslims was quite different than that of the Muslim Indian. While the Muslim Indian men wore the Indian Shirt and Pajama, the Afghan wore the baggy Shalwar (pants) and Kameez (shirt). The Afghan prefers lose baggy wear; both males and females wore baggy modest clothing. Indian Muslims wore brighter colour clothing, while Afghan Muslims wore subtle colours. Pathans also wore the pagri or the head wrap.

The fact that scholars have not explored deeply the history of Muslims in Suriname and Guyana, not much is known about this subject and much less about the Afghans Muslims. While we know that Afghan Pathans speak Pashto, there is no evidence of Pashto or Persian written literature in neither Guyana nor Suriname. But there can be no doubt that Pashto was spoken by some of these Pathans especially those who migrated directly from the NWFP. And who knows, such literature may still exist today among local Afghan families. 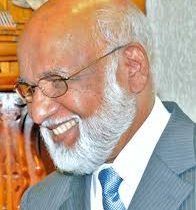 Nizam Mohammed was Speaker of the House in the 3rd Republican Parliament (1986 – 1991) of Trinidad & Tobago.   Mr. Mohammed is a former Member…