In 1947 a small area between La Jelousie and Windsor Forest that was predominantly populated by Muslims was unofficially named Pakistan symbolizing the strong bond between these two people. There were also some Chinese and Hindus who lived there. The first batch of Chinese immigrants settled in that area. The name was “adopted” by the Moslems who wanted to do something in honour of the establishment of the Moslem state of Pakistan in August of 1947. It was more their affinity to the newly created Pakistan which they viewed as their new motherland instead of Hindustan, and more importantly because all of the villagers were Muslims. Many Ustaads and Imams who were fluent in Urdu originated here. It is in this part of Guyana that is it alleged the first mosque was built somewhere between Philadelphia and Vergenloogen by Muslims indentured labours. The relationship between these two people are as strong as it was in 1947.

Guyana Pakistan historical relationship continued after Guyana’s independence in areas of culture, politics and commerce. When Guyana gained its independence in 1966 Pakistan presented Guyana an oriental rug and since then relationship has grown bi-laterally and multi-laterally thorough the UN, NAM, the OIC and the Commonwealth. The two countries have exchanged Honourary consuls. More recently Pakistan’s High Commissioner to Guyana Mr. Musa Javed Chohan said, “I am happy to inform you that I have the blessings of the President and Prime Minister that more needs to be done on both sides and that there needs to be greater awareness between the two countries and we have to go beyond cricket,” Foreign closer ties between Guyana and Pakistan to more substance in areas economic and commercial relations will be the focus of newly appointed Pakistan High Commissioner to Guyana.

Despite geographical distance and limited trade, the two countries have strong bonds of cultural affinities since many Guyanese have their roots in South East Asia. This, he noted, gives consideration to the promotion of interchange in the cultural arena. However, when it comes to people to people relationship, there are strong ties between Guyana’s Muslims and Pakistan who keeps this bond alive and strong, and has stated before, Pakistan has more or less mothered the Guyanese Muslims since 1947. 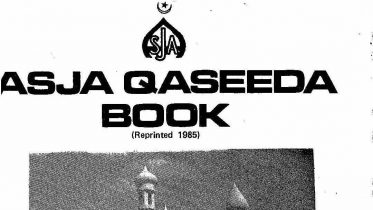 Qasida (also spelled qasidah or qaseeda), is a form of poetry from pre-Islamic Arabia. A Na`at  is a poetry that specifically praises the Prophet Muhammad ﷺ.  Many of…