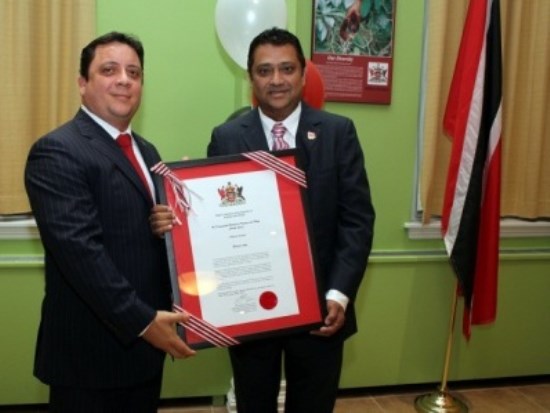 The Distinguished National of Trinidad and Tobago Canada Award

Oct 2nd 2012: His Excellency Philip Buxo, Trinidad and Tobago’s High Commissioner to Canada awarded Mr. Richard Aziz popular host of Shabnam Radio and Caribbean Showtime TV Show “The Distinguished National of Trinidad and Tobago Canada Award”.   Mr Richard Rawle Aziz, Cultural Impresario is a permanent fixture within the T&T Diaspora in the Greater Toronto Area and is involved with all religious festivals and the propagation of their spiritual and charitable programs. His leadership and involvement in promoting T&T’s culture in Canada is unparalleled. Mr Aziz is a credible, vibrant voice in the media, community, the arts and entertainment, culture, and social justice.

Mr. Aziz produces the weekly Saturday broadcast of Shabnam Radio on WTOR 770AM TORONTO for the past 16 years and the weekly Caribbean Showtime TV program for the past four.

Mr. Aziz, speaking to CaribbeanMuslims.com, said that “This award is dedicated to my father Abdool Aziz who instilled a sense of community and sharing in all his children, I am truly humbled and thankful for being afforded this award, coming from my homeland it is a special honour that demonstrates the potential of all aspiring Trinidadians and Tobagoians as well as others from the Caribbean region”.

Five Trinidad and Tobago nationals were given this award  in recognition of their significant contributions to their communities, in the fields of education, politics, medicine, arts and sports in Canada.  The other recipients were Mrs. Dawn Gayle Eudova Addison, the Principal of Morning Star Middle School; Dr. Gyaandeo Seusaran Maharajh, Chief of Cardiovascular Surgery for the Children’s Hospital of Eastern Ontario; Dr. Deo Poonwassie, Professor Emeritus, University of Manitoba, Founding director of two groundbreaking programs focusing on Aboriginal students: the Access Program and the Special Premedical Program and Mr. Justice Selwyn Reginald Romilly, Superior Court Judge created history as the first black person appointed to any court in British Columbia, and only the second black person appointed to any court in Canada.

Mr. Buxo also announced that the High Commission will soon be publishing a book entitled “Together we Aspire, Together we Achieve: Trinidad and Tobago in Canada 1962 to 2012”. There are over fifty nationals present who will be included in this publication which honours members of the Trinidad and Tobago Diaspora in Canada who have brought the high standards of Trinidadian and Tobagonian legacy to their “home away from home”.

Speaking directly to these nationals, High Commissioner Buxo told them that they are in fact the true Ambassadors of Trinidad and Tobago. “You know who you are and now others know where you are in the Canadian landscape. I entrust you to connect with each other and together you must aspire to inspire the next generation to achieve excellence in Canada”. 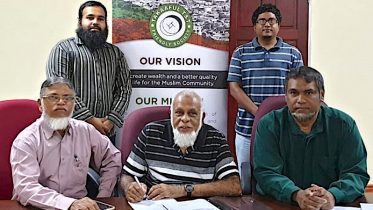