In this connection Muslims should take note of the followinheinous act on the issue of “Ya Muhammad,” because it is established without doubt as one of the great Wahhabi tamperings of our time. If one looks at an old picture of the golden gate at the entrance of the Prophet’s grave, one will see, at the top of each door, intertwined, the invocations in Arabic calligraphy:

If one looks now at the top of each door, one will notice that the Arabic letter Y ( ) in the initial position in the word YA in “Ya Muhammad” has been lopped off, but the A ( ) as well as the bottom two dots of the Y have been left in place, so that now one will read:

We have published a picture of the old gate, before the Wahhabis defaced it, on the front cover of our book Islamic Beliefs and Doctrine According to Ahl al-Sunna: A Repudiation of “Salafi” Innovations, Part I. It is a high-quality, clear color picture which we hope can seen and understood by all Muslims. All must know the acts of the shaytans who rage against the Prophet with their hand, their tongue, and their heart.

We declare that we consider such enemies of the Prophet and those who support them as our enemies, and call upon every Muslim to oppose them with us. They may have penetrated many mosques and Islamic centers, but they are very easily unmasked. All you have to do is shout: “YA RASULALLAH!” in front of them and you will see them scurry away.

The above invocation was also used after the Prophet’s lifetime, as is proven by the sound (sahih) hadith authenticated by Bayhaqi, Abu Nu`aym in the “Ma`rifa,” Mundhiri (“Targhib” 1:473-474), Haythami, and Tabarani in the “Kabir” (9:17-18) and the “Saghir” (1:184/201-202) on the authority of `Uthman ibn Hunayf’s nephew Abu Imama ibn Sahl ibn Hunayf: A man would come to `Uthman ibn `Affan for a certain need, but the latter would not pay him any attention nor look into his need, upon which he complained of his condition to `Uthman ibn Hunayf who told him:

“Go and make ablution, then go to the mosque and pray two rak`at, then say (this du`a),” and he mentioned the invocation of the blind man, “then go (to `Uthman again).”

The man went, did as he was told, then came to `Uthman’s door, upon which the door-attendant came, took him by the hand, and brought him to `Uthman who sat him with him on top of the carpet, and said: “Tell me what your need is.” After this the man went out, met `Uthman ibn Hunayf again, and said to him: “May Allah reward you! Previously he would not look into my need nor pay any attention to me, until you spoke to him.” He replied: “I did not speak to him, but I saw the Prophet when a blind man came to him complaining of his failing eyesight,” and he mentioned to him the substance of the previous narration.

Finally, “Ya Muhammad” is the speech of sayyidina `Isa to the Prophet after `Isa’s descent, according to an authentic hadith on the authority of Abu Hurayra:

I heard the Prophet say: “By the one in Whose hand is Abu al-Qasim’s soul, `Isa ibn Maryam shall descend as a just and wise ruler. He shall destroy the cross, slay the swine, eradicate discord and grudges, and money shall be offered to him but he will not accept it. Then he shall stand at my grave side and say: Ya Muhammad! and I will answer him.”

Thus the following report of Ibn Abi Fudayk, one of the early scholars of Madina and one of Shafi`i’s shaykhs, applies not only to the Prophet’s visitor in Madina, but to every person who invokes blessings on the Prophet from afar with the words Ya Muhammad as if he were standing in front of the Prophet: “I heard one of the authorities whom I have met say: “It has reached us that whoever stands at the Prophet’s grave and recites: “Allah and His angels send blessings on the Prophet…” (33:56) and then says: “May Allah bless you, O Muhammad” (sallallahu `alayka ya Muhammad) seventy times, an angel will call him saying: May Allah bless you, O So-and-so; none of your needs will be left unfulfilled.”” Ibn Jama`a related it in Hidayat al-salik 3:1382-1383, Ibn al-Jawzi in Muthir al-gharam p. 487, Qadi `Iyad in al-Shifa’, and Bayhaqi in Shu`ab al-iman (#4169).

Bukhari in his Adab al-mufrad, Nawawi in his Adhkar, and Shawkani in Tuhfat al-dhakirin all relate the narrations of Ibn `Umar and Ibn `Abbas whereby they would call out Ya Muhammad whenever they had a cramp in their leg (Chapters entitled: “What one says if he feels a cramp in his leg”). Regardless of the grade of authenticity of these narrations, it is significant that Bukhari, Nawawi, and Shawkani never raised such a disturbing notion as to say that calling out “O Muhammad” amounted to shirk.

In conclusion, we advise the beloved brothers and sisters who meet objections to saying “Ya Rasulallah” to stand firm in the knowledge that their act is grounded in the Shari`a and that it is the objectors who are in the wrong. If the objectors show enmity, such as using labels of “shirk” and so forth in the manner of “Salafis” and Wahhabis, at that time steer clear of them because Allah has sealed their hearts and they will even reject the evidence of Qur’an and hadith through pride in their hearts. It is better to emigrate from them and protect one’s religion until they repent, rather than to accommodate their disease and lose even one iota of a meritorious act, and Allah knows best. 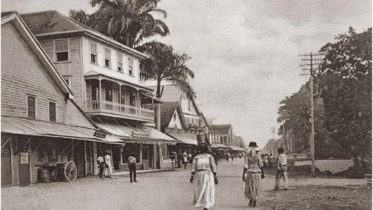 – 15 years after slavery was abolished This is an extremely important book as it gives a snapshot of British Guiana almost 160 years ago…….