CONCERNING THE OBJECTIONS OF SOME TO USING THE PHRASE: AS-SALAMU `ALAYKA YA RASULALLAH (“PEACE UPON YOU, O MESSENGER OF ALLAH”), ALTHOUGH ALLAH SAYS IN THE HOLY QUR’AN:

“O BELIEVERS, SEND BLESSINGS AND GREETINGS UPON HIM,” AND THEIR CLAIM THAT ONE CANNOT HAIL THE PROPHET WITH THE TERM YA (“O”)

Our answer is, al-hamdu lillah, that it is permissible, excellent, praiseworthy, and highly meritorious to invoke blessings upon the Prophet with the phrases:

and any such phrases at all times and places, but most especially in gatherings of dhikr where such phrases increase love of the Prophet ﷺ in the heart in untold amounts, and we are obliged to love him more than children, parents, and life itself. The scholars of manasik (rites of Pilgrimage) recommend these phrases, moreover, when visiting the Prophet ﷺ in Madina. It is established that `Abdullah ibn `Umar would say: as-salamu `alayka Ya Rasulallah upon each of his visits to the Prophet ﷺ, and a similar phrase with Abu Bakr and with his father. Those who object to using “YA” with the Prophet ﷺ are injuring themselves and others by falling into various traps of inconsistency and innovation due to the following reasons:

1. Apparently they don’t make salat, or they don’t say tashahhud in salat and this renders their salat invalid if this is the case. For in every salat, at least ten times a day, we say, in tashahhud:

2. Allah orders us not to call upon the Prophet ﷺ in the same way as we call upon each other:

This is a proof that He did not prohibit us from calling upon him, for an absolute prohibition needs not be qualified further. Allah Himself shows us the etiquette of addressing the Prophet ﷺ by calling him Himself “Ya ayyuha al-nabi” — O Prophet — and referring to him as “The Messenger” in the Qur’an, whereas He calls other Prophets by name: Ya Ibrahim, Ya Yahya, Ya Musa, Ya `Isa, etc. The `ulama have explained that Allah established by this an honorific difference between the Seal of Prophets and those that preceded him, blessings and peace of Allah upon him and upon all of them. They have also said that it is the reason why we should prefer to say: Ya Rasulallah over saying Ya Muhammad.

3. As mentioned in the section on Tawassul, the Prophet ﷺ taught a blind man to make a du`a in which he has to say: “Ya Muhammad”. This is a well-known authentic hadith and no-one can refute it except those who have no knowledge of the Religion. This is the invocation:

“O Allah, I am asking you and turning to you by means of your Prophet Muhammad, the Prophet of mercy; O Muhammad, I am turning with you to my Lord regarding my present need so that He will fulfill it; O Allah, allow him to intercede (with You) for me!” 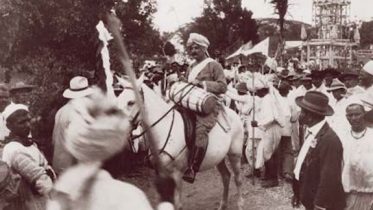 Friday October 30th 2009, will mark the 125th anniversary of what historians describe as perhaps the bloodiest massacre in Trinidad and Tobago under British rule….